THE BLACK EYED PEAS HOST KICK OFF EVENTS TO CELEBRATE RELEASE OF “MASTERS OF THE SUN-THE ZOMBIE CHRONICLES”, THEIR FIRST GRAPHIC NOVEL, DURING COMIC-CON INTERNATIONAL

San Diego July 20, 2017–Global recording artists and music hit machine the Black Eyed Peas have arrived in San Diego to participate in Comic-Con International 2017. The band members will be appearing at poster signings, Q&As and panels to promote the release of their first graphic novel, “Masters of the Sun–The Zombie Chronicles” as a part of the Black Eyed Peas celebration of 20+ years of creative collaboration and pushing boundaries across music genres, within video imagery, digital content, and now, the graphic novel print form.

“Masters of the Sun” plotline synopsis: The fictionalized saga begins with the City of Los Angeles under attack by aliens, while humans are morphing into zombies. The main character, Zulu-X, who also has a penchant for Hip-Hop, is thrust into the middle of the action-packed adventure, fighting a nefarious ancient order with the combination of wisdom and street smarts. Blending music with comics, “Masters of the Sun” draws upon will.i.am’s personal story from his youth in the 1980’s, and embodies real-life social allegories that include L.A. gangs, Hip-Hop and street dance culture.

The over-sized graphic novel is now rolling on to bookstore shelves, and retails for MSRP US$39.95. 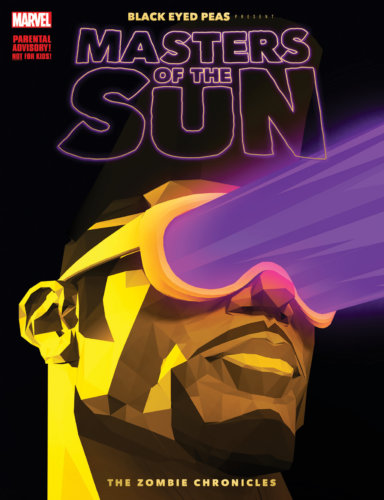