Join us for an evening of Buffy themed Giveaways, Trivia, and Cosplay Contests!

Scoobies, Slayerettes and Whedonites can take part in a night of slayage that will include the following:

·         Buffy Fandom Feud Trivia Contest – Fans will get the opportunity to win Slayer Swag as they team up to show off their Buffy knowledge!

·         Once More, With Feeling! – At the party, fans can show-off their improv skills when they get to reenact their favorite Buffy show moments.

·         Fans will be treated to select appetizers and a Buffy 20th anniversary cake as they sip on signature Slayer drinks, available during the event.

·         Photo opportunity with a life-size image of The Gentlemen from the popular episode “Hush.” Fans who share on social media will receive an exclusive spell in a small glass vial, a perfect keepsake for Buffy fans, from the forthcoming book Buffy the Vampire Slayer: The Official Grimoire (Insight Editions, October 2017).

·         Various stations including an in-person Buffy table-top board game competition from Jasco Games, and an interactive wall-sized Buffy coloring book pages from Dark Horse. Fans will be able to color and create their own Buffy art for a special digital mosaic in celebration of #BuffySlays20!

In regards to the “Buffy the Vampire Slayer: 20 Years of Slaying” fan event, Legion M Co-founder Jeff Annison stated: “As a fan-owned company we can think of no better way to spend a Saturday night in San Diego than hanging out with some of the best fans on the planet!” ​ 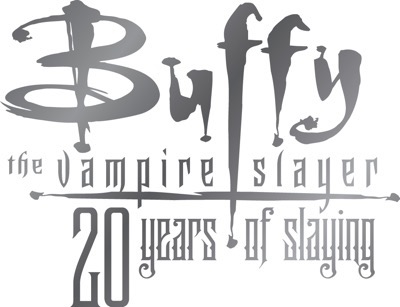 Also at San Diego Comic-Con, fans will have the opportunity to pre-order the Buffy the Vampire Slayer: The Complete Series 20th Anniversary Edition DVD boxed set at the Fox Booth #4229 for $99.98. Available everywhere on September 19, 2017, the DVD collection includes an official “Buffy” Dark Horse Comic Book featuring an exclusive cover available to fans for a limited time.

The teen years can be brutal. Especially when you’re Buffy Summers (Sarah Michelle Gellar) –  a Sunnydale High School student destined to slay supernatural, blood-sucking baddies instead of hanging out at the mall. Over the seven seasons of this thrilling, witty show, Buffy struggles to maintain allies in the fight against evil, while also engaging in on-off romances with a moody vampire (David Boreanaz) or two (James Marsters). Now you can own this 39-disc set containing all 144 episodes of one of the smartest, funniest, most action-packed series ever to slay on the small screen – also starring Alyson Hannigan, Anthony Head and Nicholas Brendon.

A wide-range of key licensees and retail partners are celebrating the 20th Anniversary of Buffy the Vampire Slayer including Hot Topic, BoxLunch, Dark Horse, Simon & Schuster, Insight Editions, Funko, Harper Design, AC/DC Apparel, Jasco, Upper Deck, Ripple Junction, among others. They are sharing with fans a unique collection of Buffy apparel, accessories, board games, new books, comics and more. Among the recent highlights:

·         Coming this August, Buffy the Vampire Slayer is joining the Funko Rock Candy line! Unable to escape her destiny, this series includes the Vampire Slayer herself, Buffy Summers, and her academically-excelling counterpart Willow Rosenberg…Together they’ll save the world! Add them both to your collection this Summer.

·         The eagerly awaited Buffy the Vampire Slayer fashion collection is now available online at hottopic.com.  Hot Topic, the retail destination for music and pop-culture inspired apparel, accessories, collectibles and more, is celebrating 20 years of slaying with a fashion collection inspired by the style of beloved Buffy characters. The line features six pieces including Willow’s iconic 90s sweater, a long trench coat inspired by Buffy, a black motorcycle jacket inspired by Faith, a white high-low dress inspired by the dress worn by Buffy in Prophecy Girl, as well as tops featuring iconic lines from the series.