Fox has unveiled their comic con 2013 television plans and they are pretty awesome! First off… Fox is expanding to a two-story booth on the convention center floor, where talent from the 11 series will rotate through for signings and other activities.

And they have released a bunch of shows new and returning coming to the Con… I’m excited for Sleepy Hollow! Plus… I know Billy is going to die for this one… How I Met Your Mother!!!

Check out the schedule below!

Sleepy Hollow: EPs Alex Kurtzman and Roberto Orci (Fringe) and Len Wiseman will unveil the new project with an exclusive, world premiere screening of the Pilot followed by a Q&A with fans featuring series lead Tom Mison and Nicole Beharie.

Brickleberry: A full new episode of season two will debut with an intro from creators and eps Waco O’Guin and Roger Black.

Futurama: Most of the voice cast from the series will be on hand to discuss the resurrected (and re-canceled) cartoon and introduce scenes from the upcoming “Last Episode Ever.”

The Simpsons: The 25-year-old cartoon promises never-before-seen footage from guest director Guillermo del Toro, among other things.
Family Guy: A season 12 preview is on the schedule, along with Seth Green, Alex Borstein and surprise guests.
American Dad: The American Dad panel will include world premiere of a song from the never-before-seen Christmas episode. 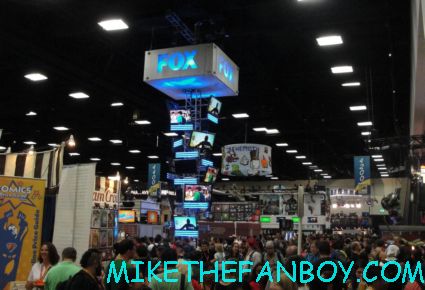