As you all know, I love me some Vikings. The cast will be on hand for SDCC this year along with new series Project Blue Book.

Can’t wait to check out the booth activations as well as the Project Blue Book offsite. All the info is below!

HISTORY®’s HIT SERIES ‘VIKINGS’ RETURNS TO SAN DIEGO COMIC-CON ON FRIDAY, JULY 20 WITH CAST PANEL IN BALLROOM 20, CONVENTION FLOOR BOOTH AND AN EXCLUSIVE LOOK AT WHAT’S TO COME IN THE NEW SEASON

NEW UFO DRAMA SERIES ‘PROJECT BLUE BOOK’ TO MAKE SDCC DEBUT ON SATURDAY, JULY 21 WITH PANEL AND OUT OF THIS WORLD ACTIVATION 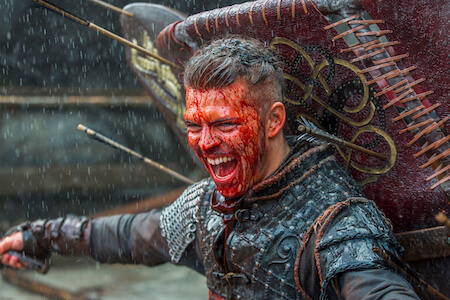 Please see details below and join in on the conversation by using #VikingsSDCC @HistoryVikings and #BlueBookSDCC. 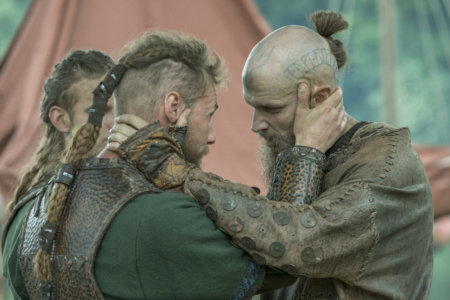 HISTORY’s upcoming new drama series “Project Blue Book” is inspired by the work of Dr. J Allen Hynek and the true, top secret investigations into Unidentified Flying Objects (UFOs) and related phenomena conducted by the United States Air Force from 1952-1969. Series stars Aidan Gillen (“Game of Thrones”), Michael Malarkey (“The Vampire Diaries”), Neal McDonough (“Arrow,” “Legends of Tomorrow”) and Laura Mennell (“Alphas,” Watchmen), along with producers, will share details about what’s to come in the new series and reveal a sneak peek of the first season. Cast subject to change.

HISTORY is giving SDCC attendees an exclusive sneak peek into the world of its upcoming drama series “Project Blue Book.” A top-secret government sector of the United States Air Force, Project Blue Book investigated the presence of UFOs and related phenomena on our planet.

Located in the Petco Parking Lot, Project Blue Book HQ will bring these real UFO cases back to life with immersive experiences, including a chance to send a message billions of miles into space in an attempt to answer the timeless question: is there life beyond earth?

Only the Seer knows what lies ahead in the upcoming season of HISTORY’s “Vikings” and this year at San Diego Comic-Con, fans have the opportunity to enter his lair and consult him about their own future in a hyper-shareable photo prophecy. Join us and see what the future has in store for you!

Custom, limited edition VIKINGS comic books will be given to select fans who visit HISTORY’s “Seer’s Lair” convention center booth. In this exclusive comic book for SDCC, after the battle between Ragnar Lothbrok’s sons ends in chaos, the wrath of Thor comes down upon scavengers who have stolen Lagertha’s hammer amulet found in Astrid’s dying hands.

Custom, limited edition “Project Blue Book” comic books will be given to select fans who visit the “Vikings” convention center booth and the “Project Blue Book Headquarters” activation on the Petco Parking Lot. In this exclusive comic book for SDCC, characters Dr. Allen Hynek and Captain Michael Quinn investigate real life Project Blue Book case #1972: The Pittsburg Kansas UFO encounter and interview William Squyres, a radio station musician who claims he saw a low-hovering object with clearly-defined windows and shadowy figures who may or may not have been human.

About “Vikings”
“Vikings” is the critically acclaimed series from creator and sole writer Michael Hirst(Academy Award® winning film Elizabeth and the Emmy® and Golden Globe® nominated series “The Tudors”) and is a family saga that tells the remarkable tales of the lives and epic adventures of the raiders and explorers of the Dark Ages. Across all platforms, the last season of “Vikings” averaged 11.2 million viewers per episode. “Vikings” is a top five drama across all of cable this year, and finished its season as the #1 original series on cable on Wednesday nights among all key demographics (Live+SD). Vikings averaged 3.7 million total viewers in Live+7.

In the mid-season five finale, legendary Viking Rollo (Clive Standen) returns just as the divide between the Lothbrok family climaxes with Ragnar’s sons battling each other to rule the world. The long-awaited faceoff ends with a strategic victory going to Ivar the Boneless (Alex Høgh Andersen) who vows vengeance on his betrayers with a direct target on Lagertha’s (Katheryn Winnick) back. Last seen in an unstable state and losing her appearance as a fierce Viking warrior, Lagertha is hopeful she will regain her spot in Kattegat as its rightful leader.

“Vikings” is an international Irish/Canadian co-production by TM Productions and Take 5 Productions. MGM Television serves as the worldwide distributor outside of Ireland and Canada. “Vikings” is produced in association with Corus Entertainment.

About “Project Blue Book”
“Project Blue Book” is based on the true, Top Secret investigations into Unidentified Flying Objects (UFOs) and related phenomena conducted by the United States Air Force from 1952-1969. The series is inspired by the personal experiences of Dr. J. Allen Hynek, a brilliant college professor recruited by the U.S. Air Force to spearhead this clandestine operation (Project Blue Book) that researched thousands of cases, over 700 of which remain unsolved to this day. Each episode will draw from the actual case files, blending UFO theories with authentic historical events from one of the most mysterious eras in United States history.