A show I’m super stoked for, Starz’s American Gods is heading to SDCC! It’s coming with Ash Vs. Evil Dead which is one of my favorite shows. Last season was amazing! Bruce Campbell rocks!

Check out the panel schedule, signings set up and more!

“American Gods” is Starz’s television adaptation of the Hugo and Nebula Award-winning novel by Neil Gaiman that has been translated into over 30 languages. The plot posits a war brewing between old and new gods: the traditional gods of mythological roots from around the world steadily losing believers to an upstart pantheon of gods reflecting society’s modern love of money, technology, media, celebrity and drugs. Its protagonist, Shadow Moon (Ricky Whittle), is an ex -con who becomes bodyguard and traveling partner to Mr. Wednesday (Ian McShane), a conman but in reality one of the older gods, on a cross-country mission to gather his forces in preparation to battle the new deities. Emily Browning also stars and Bryan Fuller and Michael Green are writers and showrunners on the series. David Slade is directing the pilot and additional episodes. Craig Cegielski and Stefanie Berk serve as executive
producers along with Fuller, Green, Slade and Neil Gaiman.

“Ash vs Evil Dead,” a 10-episode half-hour series, is the long-awaited follow-up to the classic horror film The Evil Dead.

The second season roars back into action with Ash leaving his beloved Jacksonville and returning to his hometown of Elk Grove. There, he confronts Ruby. The former enemies have to form an uneasy alliance as Elk Grove soon becomes the nucleus of evil. 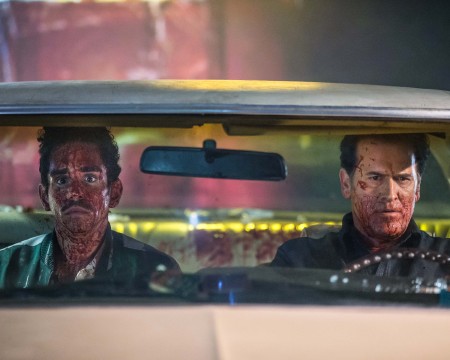 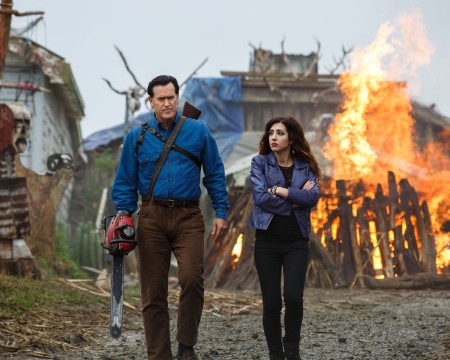 Saturday, July 23rd from 2:00PM-3:00PM at the Ash vs Evil Dead Cabin in the Petco Park
Interactive Zone