I wanted to see Looper, but honestly… I just hate Bruce Willis… and Joseph Gordon Levitt… Well, he’s just not a nice guy, so… It’s hard for me to support these guys.

Suddenly Susan though went to the local multiplex and checked out the Sci Fi tale and found it to be…
Why don’t I just let her tell you, how she thought? LOL…

In a word – Loopy

It’s difficult to review a film like Looper without giving away too much of the plot. It’s also difficult to review without giving myself a headache, or discovering several holes in said plot. It’s certainly an entertaining and fun ride. I wish the writers had gone for a more thought provoking approach, but they seemed confused by their own story. Let me try to explain. 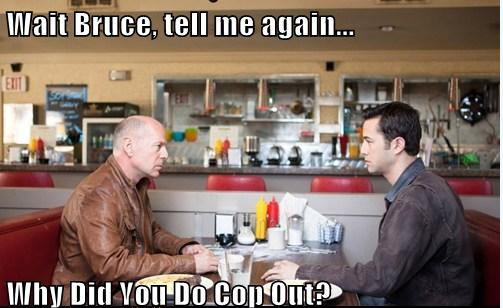 In 2044, the United States is in economic collapse, causing a surge in organized crime. In 2074 time travel is invented, but immediately outlawed. The tracking technology in 2074 has rendered it nearly impossible to dispose of dead bodies secretly. As a result, crime bosses use illegal time travel to send their targets, hooded and handcuffed, to the past where they are immediately killed by hit men known as “loopers”. The loopers are paid in solid silver bars attached to the targets back. When the crime bosses want to end a looper’s contract, they send his older self back to be killed by his younger self, where the younger version is paid in solid gold bars, thus revealing to the looper that now have 30 years in which to spend their earnings, etc. before their own demise. This is referred to as “closing the loop”. With me so far? There’s also a seemingly pointless subplot (I say seemingly for a reason) involving a strange mutation in 10% of the population. It’s the ability to float small objects, a minor telekinetic power. Still with me? 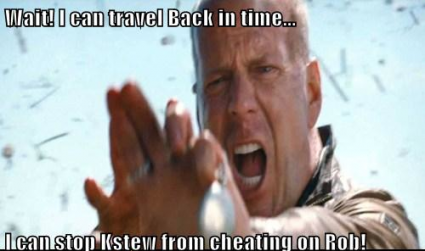 Don’t get me wrong. All of that chaos is thrilling and there’s a good blend of sci-fi and action. To cap it all off, the acting is top notch. Three hours in makeup certainly make JGL resemble Mr. Die Hard physically, but the young actor does evoke Willis mannerisms and soft spoken-ness. One thing that bugged me was that with all the prosthetics and apparent ‘research” Levitt did to embody Willis, how did he miss the fact that Willis is a lefty? Levitt is a righty, in case you were wondering, and is apparent in the way he shoots his gun. It’s a minor flaw, but it made me chuckle. Emily Blunt makes a late appearance as Sara, a single mother living on a farm, who helps Young Joe hide from the men now hunting him. She’s always great and there’s nothing different here.

Too much thought about time travel is going to make your head swim. Luckily, those thoughts stayed out of my head until later when the film was over, so they weren’t distracting enough to pull me out of the story. Even during the sit down between the two Joes, Old Joe tells his younger self not to ask questions about time travel or “we’ll be here all day using straws for diagrams”. A cop out by the writers? Maybe. It’s also a clever retort to what the whole audience was thinking. 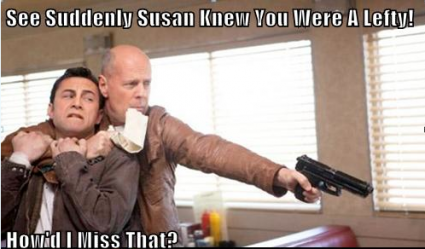 Looper doesn’t pave the way for anything new as far as time travel movies go, but it is engrossing and without a concrete “hero” either, which I found refreshing. Every character in the movie is flawed, some majorly. The cinematography is breathtaking and the futuristic world is kept in check; no flying cars in this story. I couldn’t help but think that, wouldn’t it be a simple solution for these crime bosses of the future to just kill their target and send the dead body back in time, avoiding the whole “looper”
scenario? This is where the headache ensued. My suggestion is to go see it with a friend, don’t question what you’re watching, but have a cup of coffee afterwards and lay out all the “but how dids” and “why didn’t they justs” then. It’ll be a much more enjoyable ride.

Two and a half sharpies