I’ve really wanted to see Lawlesss, however I’ve just never had the time to get to the theater. Sadly, it might make my redbox list at this point… Doh…

Suddenly Susan however really loved the film and… Gulp… Actually liked Shia LeBeouf… I’m sorry, but… I… I… I… Don’t.. Understand….

In a word – Admirable

Don’t get me wrong. Lawless is a quality film. It’s too good to dismiss, but not good enough to be epic, mostly due to a rushed and clichéd third act. The first two parts of the film are overflowing with grit, realism, and substance. The look of the film itself is its own character. The setting is so rich, one can almost smell the back woods burning and feel the grainy bumps of rust on the scrap metal littered shed. 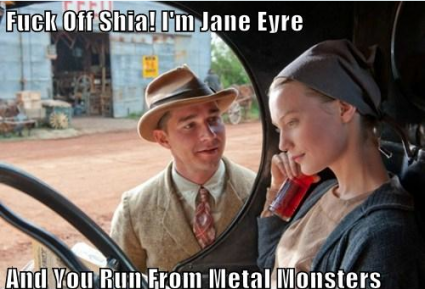 The film stars Shia LaBeouf, Tom Hardy, and Jason Clarke as real life boot legging brothers Jack, Forrest, and Howard Bondurant. It pains me to write this, but LaBeouf is good; really good. I’m not sure if he took lessons from Tom Hardy, but this was the first time he ever impressed me. Hardy gives another amazing performance layered subtlety between intelligent brute and vulnerable leader. He’s definitely on a path to becoming the next Brando. Clarke’s work as the alcoholic oldest brother is solid and I’m sure Hollywood has taken notice, so be on the lookout for more of him. 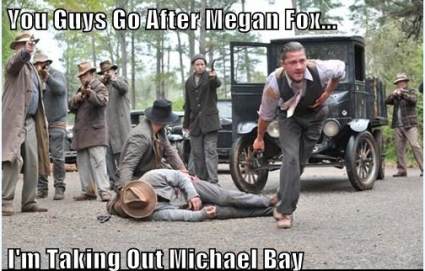 During the Prohibition era, the Bondurant brothers run a successful bootlegging racket in Franklin County, Virginia. The family’s small bar/diner serves as a front for their moon shining activities. Forrest hires Maggie Beauford, played by Jessica Chastain, a dancer from Chicago, to be their new waitress. She and Forrest share an unspoken attraction and Chastin is top notch in the role. All goes smoothly with the Bondurant’s and their fellow, neighboring bootleggers for some time. Enter Chicago’s Special Detective Charlie Rakes, played by Guy Pearce. I’ve read several other reviews praising Pearce’s performance. I personally found it unintentionally comical and one dimensional. Though he’s great at hiding his native Australian accent, I’m not quite sure what he was going for here, but it certainly wasn’t a Chicagoan one. You can’t just shave your eyebrows to make yourself look weird and call it character work. Where’s the substance, Guy?

Rakes informs Forrest that he represents Commonwealth’s Attorney Mason Wardell who wants a cut of all the profits made by Franklin’s bootleggers. Forrest boldly, yet quietly refuses and threatens to kill Rakes if he returns. He also convinces the other bootleggers to stand up to Rakes as well, though they eventually give in to Rakes’ intimidation tactics. Forrest stays strong, however, and the battle between sort of good and evil ensues. The movie has several moments of intense, bloody violence. There’s a sweet sub plot with Jack falling for the local preacher’s daughter Bertha, played effectively by Mia Wasikowska. I felt the relationship was a bit hurried and I would have preferred a longer running time to develop it more. Another stand out performance is that of Dane DeHaan, (Chronicle), who plays Cricket, Jack’s friend who assists the Bondurants with their bootlegging business, as well as working at their bar. He’s is embodiment of teenaged Leonardo DiCaprio. I hope he’ll have the same career. 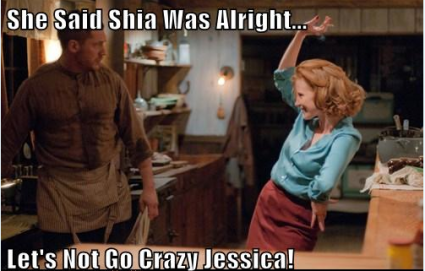 The final showdown and the moments leading up to it, move too quickly. With The first too parts so developed, I felt a bit cheated. Again, a longer running time would have served the narrative well. I can judge if a ‘based on a true story’ movie has delivered by whether or not I’m interested to learn more. The story of the Bondurant brothers had me checking the internet on my iPhone as I was leaving the theatre, so these hillbilly moonshiners definitely made an impression.