Home / Fanboying! / Melissa Is In “Stitches” After Getting An Awesome Meet And Greet With Shawn Mendes! Windy City Goodness!

First off, how much doe I love Melissa? She’s one of my favorite Chicago-ians of all time, and with a list that includes good friends, Harrison Ford, Gillian Anderson, and Patricia Arquette… that’s saying a lot!

Melissa sent in this awesome recap where she met Shawn Mendes over the holiday and once again, I drank too much Egg Nog and I missed it. Doh!

However, I found it! That’s a plus right? Check out Melissa’s recap below!

Back in October I found out 5 Seconds of Summer was going to be performing at the B96 Jingle Bash…an annual radio station holiday show that also included: OMI, Hailee Steinfeld, Pentatonix, Shawn Mendes, Jason Derulo, and Demi Lovato. My bestie, Brandy, and I quickly decided to get tickets. Now all we had to do was wait.

Fast forward to last Monday. B96 was giving away meet and greet passes for the show all week. On Monday we tried our hardest to win 5SOS passes, but were never able to get through. Wednesday was Shawn Mendes day and a small miracle happened…Brandy got through and won! She was caller #9 and had to play a little game with the morning show DJs…they gave her the name of a famous Shawn/Sean and she had to spell it correctly (Shawn Johnson, Sean Combs, Sean Connery, and Shawn Mendes). We were beyond excited that we’d get to meet Shawn Mendes. Our excitement dulled a little when we found out that the meet and greet was going to be at 7:00 and we would have to miss some of 5 Seconds of Summer’s set!

We decided there was no way we were missing 5 Seconds of Summer’s performance (as it was the main reason we were going to the show) so we’d watch their set and then run to the meet and greet and hopefully it’d all work out.

On Saturday we arrived at the venue and went to pick up the passes at the box office. Since we had never been there before we weren’t quite sure how to get to the office. A lot of girls were lined up along the outer side of the fence that surrounded the buses hoping to catch a glimpse of any of the artists performing that night. Somehow in our travels we ended up behind that fence…a place we probably shouldn’t have had access to, but there wasn’t any security or anything so we just kept walking. We heard a huge rumble of screaming and saw who we thought were Luke Hemmings and Ashton Irwin from 5SOS. A few seconds later we saw the unmistakable red hair of Michael Clifford. We both looked at each other and then screamed MICHAEL! and waved at him. He smiled and waved back. It was so cool! It also felt like a really good omen for the rest of the night.

We got our passes and then headed into the venue. We did a quick scan of our seats before we went to find the meet and greet area. Luckily the area wasn’t too far from our seats.

The show started about 6:35 and 5SOS was incredible. They have a command of the stage/audience like you wouldn’t believe. They did 6 songs and sounded great. It was an awesome taste of what their own tour will be like next year. Their set ended at 7:05 and we ran…we ran like someone was chasing us…and made it to the meet and greet just in the nick of time.

Brandy told the girl from B96 her name and she was like “I don’t see it on the list…” ARE YOU KIDDING ME? I was freakin’ out interally, but managed to keep calm outwardly. I showed her the confirmation email and the passes and everything and she was finally able to find her name. Then she realized she didn’t have any wristbands and told us to wait. She was probably gone for a minute, but it felt like an eternity. When she came back she told us to just go ahead back.

We had made it!

The line moved very quickly and before I knew it we were backstage! The lady running the line told us we couldn’t hug Shawn…we were only allowed to say hi and quickly take the picture. We walked up to Shawn when it was our turn and his arms were already open so…how could you not hug him? He was very sweet and said it was nice to meet us and we took the picture. We thanked him and told him we were excited to see him perform later that evening. It was a quick moment, but one I’ll always remember. 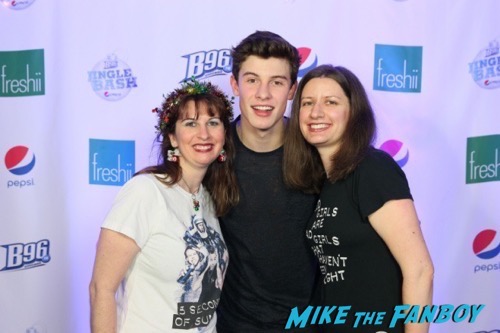 After that we calmed down a little we waited around that area to see if we could catch 5SOS when they left, but that didn’t pan out. We ended up missing OMI and Hailee Steinfeld, but neither of us was too fussed about that. We went back to our seats in time to see Pentatonix. I didn’t really know much about them. I think what they do vocally is amazing, but their stage presence is kinda…eh. Shawn was up after them and he was amazing. He definitely held the audience in the palm of his hand…which is no small feat for a 17-year-old guy up there alone with his guitar. He’s definitely going places.