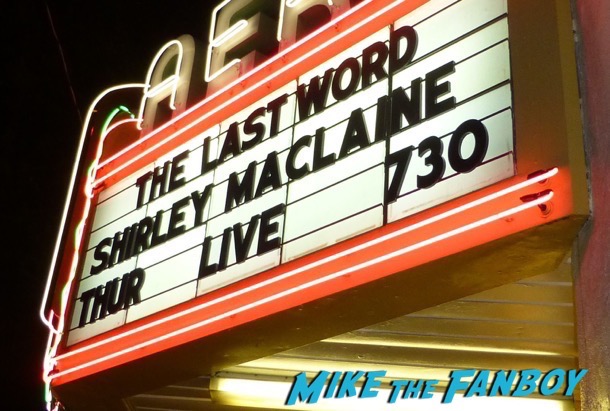 I was recently out to meet the legendary Shirley MacLaine. I have met the actress before, but I still have a couple of items that I would like her to sign. I went to the venue, and was one of four fans interested in meeting her. Security came out and asked what we had for Shirley. The publicist came out to join security and said they were going to call ahead to see if she wouldn’t mind stopping for the four of us. If she wasn’t willing, they asked if we were okay with leaving. Normally, I wouldn’t buy this ploy or comply with out the idea of waiting somewhere nearby, but the fact that Shirley is 82 years old made me think and just letting it go.             Security was gone for a bit and came back out to say that Shirley was tired and was not going to sign. Again, she is 82 and I was not willing to badger her. I do think it was a sad excuse. I mean there were four people. She was not going to be bombarded. Two of us left, and I noticed the other two fans stayed and kept talking to security. I am not sure if they finagled into staying and meeting with Shirley. Oh well, another fanboy fail. Until next time…