Convention attendees who are genre and horror film buffs, obscure franchise fanatics, animation aficionados, fans of retro television or who just have a penchant for pop culture entertainment will not want to miss this year’s panel event: An Inside Look at Shout! Factory, Shout! Kids, Scream Factory and Shout! Factory TV on Friday, July 10th, at 7:30 pm in Room 24ABC. Join Brian Ward (BD/DVD producer), Melissa Boag (vice-president, Shout! Factory Kids), and Jeff Nelson (senior marketing director, Scream Factory) as they give you an exclusive sneak peak at upcoming Blu-ray and DVD collector’s editions and make some very special announcements. This fan-driven event featuring lively discussion and a Q&A is moderated by Eric Goldman (executive editor at IGN). 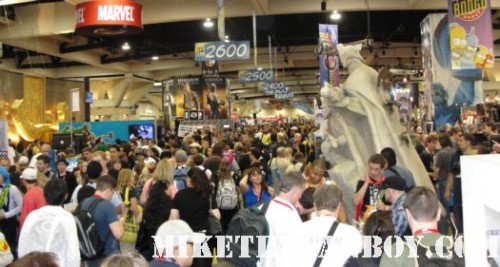 The Shout! Factory Green Screen Photo Booth: During all convention hours Thursday through Sunday, commemorate your SDCC experience with a free digital photo at our photo booth! From MST3K to Scream Factory, My Little Pony to Power Rangers, we’ve got a backdrop to fit your fandom! Once we’ve snapped your picture and you’ve chosen your background, you can share your photo digitally via the social media platform of your choice. 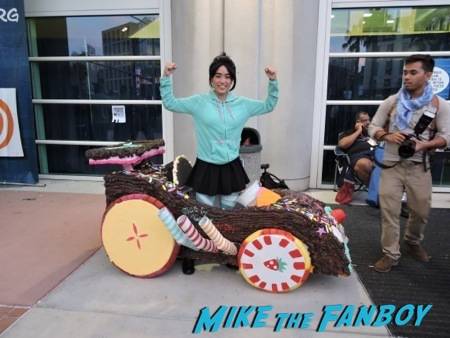 Kaiju Scavenger Hunt:
To celebrate the upcoming The Kaiju Movie Marathon, Shout! Factory TV is teaming with Famous Monsters Magazine (booth #1507) for a kaiju scavenger hunt! Visit both booths to collect each half of a special postcard, and then turn in the completed postcard at either Shout! Factory’s or Famous Monster’s booth to collect your limited-edition Godzilla poster!

My Little Pony Costume Contest: Is your My Little Pony cosplay so good even Rarity would be impressed? Come show us! If you are dressed as a My Little Pony character, come to the Shout! Factory booth (#4118) and have your picture taken in the green-screen photo booth to enter. Each day (Thursday- Sunday) one winner will be selected to receive a $100 Amex gift card. The grand prize winner a $150 Amex gift card PLUS an entire set of EVERY My Little Pony release by Shout! Kids! No purchase necessary. Rules and restrictions apply. 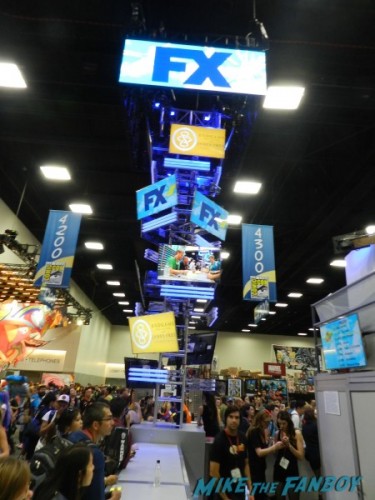 The Last Unicorn: The Enchanted Edition (BR/DVD/Digital Combo Pack)
One of the most beloved fantasy films of all-time, The Last Unicorn has enraptured generations of fans with its poetic tale of a brave unicorn’s journey through a mystic land seeking others of her kind. Showcasing the latest hi-definition restoration of the uncut film, endorsed by Peter S. Beagle, The Last Unicorn: The Enchanted Edition is brought to life with exquisite detail never before seen, to ensure the most satisfying film viewing experience for all fans, old and young alike. The release also comes loaded with brand new bonus features, including an audio commentary with Peter S. Beagle, Michael Chase Walker, Connor Cochran, Terri Kempton and Travis Ashmore; “Highlights from The Last Unicorn Worldwide Screening Tour with Peter S. Beagle,” the featurette True Magic: The Story of The Last Unicorn, and animated storyboards, as well as the original theatrical trailer.

MST3K: Volume XXXIII (DVD)
This summer you can get your kicks with the cool cats on the Satellite of Love, in orbit with some of the cheesiest movies ever made. Don’t be a square, it’ll be a gas! On July 28th, 2015, Shout! Factory will release Mystery Science Theater 3000: Volume XXXIII, featuring four episodes never before on DVD: Daddy-O, Earth vs. the Spider, Teen-Age Crime Wave and Agent For H.A.R.M. The set also includes a bevy of brand-new bonus features including the featurettes Beatnick Blues: Investigating ‘Daddy-O’, This Movie Has Legs: Looking Back at ‘Earth Vs. The Spider’ and Film It Again, Sam: The Katzman Chronicles; interviews Tommy Cook: From Jungle Boy To Teenage Jungle and Peter Mark Richman: In H.A.R.M.’s Way, MST hour wraps, theatrical trailers and four exclusive Mini Posters by artist Steve Vance.

Thunderbirds: The Complete Series (Blu-ray)
In 5…4…3…2…1…Thunderbirds are GO! Available for the first time on Blu-ray, the re-mastered high-definition transfer showcases Gerry Anderson’s visionary Supermarionation technique in exquisite detail never before seen, and promises audiences of all ages an outstanding showcase of thrills, action, and adventure with no (okay, maybe some) strings attached. Featuring all 32 episodes of the popular science-fiction series in a 6 BR set, Thunderbirds: The Complete Series also includes the documentary “Launching Thunderbirds”, which includes a never before seen interview with Gerry Anderson, and a vintage publicity brochure as bonus features.

Nightbreed: The Director’s Cut [Limited Edition] (Blu-ray)
After 25 years, fans and horror enthusiasts can finally experience NIGHTBREED like never before! Scream Factory, in conjunction with Warner Bros., was able to find the long-thought-missing original film elements and combed through over 600 boxes to locate not only the lost scenes but a treasure trove of never-before-seen footage as well. With lost footage meticulously restored, the result is not only a more faithful adaptation of Clive Barker’s book Cabal, but also what he originally intended NIGHTBREED to be. This three disc, extremely limited set contains the new director’s cut, the theatrical cut, and is loaded with brand new bonus features.

The People Under the Stairs (Blu-ray with poster)
In horror master Wes Craven’s The People Under The Stairs, a young boy is trapped inside the fortified home owned by a mysterious couple. Suddenly thrust into a nightmare, he quickly learns the true nature of the house’s homicidal inhabitants and the secret creatures hidden deep within the house. The People Under The Stairs comes loaded with bonus features, including Audio Commentary with writer/director Wes Craven, Audio Commentary with actors Brandon Adams, A.J. Langer, Sean Whalen, and Yan Birch, House Mother – an interview with actress Wendy Robie, What Lies Beneath – interviews with special make-up effects Artists Greg Nicotero, Howard Berger and Robert Kurtzman, House of Horrors – an interview with director of photography Sandi Sissel, Settling The Score – an interview with composer Don Peake and much more!

Wyrmood: Road of the Dead (Blu-Ray)
In the aftermath of a comet breaking up over Earth, most of the planet’s population quickly succumbs to a strange disease which turns them into “zombies.” Few survive, and those who do, quickly discover all existing fuel sources have been rendered useless by the plague. A raucous, blood-soaked post-apocalyptic epic filled with inspired vehicular mayhem and unrestrained gore, Wyrmood: Road of the Dead is one of the most wildly entertaining genre films in years. This critically-acclaimed rambunctious adventure comes loaded with bonus features, including an audio commentary with the Roache-Turner Brothers, the featurette The Wyrmdiaries: Behind the Scenes of WYRMWOOD, Crowdfunding Videos: Wyrmwood Production Pitch, deleted scenes, a seven minute teaser scene, a gallery of storyboards by the director and the theatrical trailer.

Robot Jox (Blu-Ray)
In the distant future, mankind has forsaken global wars for battles of single combat. The world has been divided into two opposing super powers, with each side represented by trained champions. Their weapons are huge robotic machines, capable of battle on land, sea and in the air. From celebrated director Stuart Gordon (Re-Animator, From Beyond) and executive producer Charles Band comes ROBOT JOX, a riveting sci-fi action adventure. Arriving for the first time on Blu-ray, this highly-anticipated release contains insightful bonus content, including new interview with actor Paul Koslo, audio commentary, behind-the-scene footage and much more.

Howling II: Your Sister Is A Werewolf (Blu-Ray)
After countless millennia of watching, waiting and stalking, the unholy creatures known as werewolves are poised to inherit the earth. Legendary horror icon Christopher Lee (The Lord of the Rings, Count Dracula) faces off against sexy cult favorite Sybil Danning (Battle Beyond the Stars, Chained Heat, Grindhouse) in this terrifying descent into a world of nightmares that turns out to be all too real! This high-anticipated release contains extensive bonus content, including all-new interviews with actor Reb Brown, actress Sybil Danning, special make-up effects artists Steve Johnson and Scott Wheeler, audio commentary, behind-the-scenes footage and much more.

I, Madman (Blu-ray)
After a spine-tingling paperback catches the imagination of bookstore clerk Virginia, she seeks out the author’s second book, I, Madman. But once she opens the cover, its eerie tale of obsessive love comes to life, catapulting a disfigured, scalpel-wielding killer from the world of fiction onto the streets of Hollywood with one demented goal: to win Virginia’s love, one murder at a time! Arriving for the first time on Blu-ray, this long-awaited release contains insightful bonus content, including interviews with director Tibor Takacs, actor & artistic supervisor Randall William Cook, screenwriter David Chaskin, actor Clayton Rohner and actress Stephanie Hodge, behind-the-scene footage, audio commentary and much more.