D23 is a Disney lovers dream and there is so much info coming out about the new films from Disney/Pixar.

Two of the new films from Dixar and Disney are The Good Dinosaur and Zootopia.

Check out the first looks photos below!

Anticipation for Disney·Pixar’s “The Good Dinosaur” was amplified when director Peter Sohn and producer Denise Ream shared breathtaking sequences with fans, including never-before-seen footage of a trio of T-Rexes in action.

In theaters on Nov. 25, 2015, the film introduces audiences to Arlo, a sheltered Apatosaurus who finds himself far from home, and Spot, Arlo’s unlikely human friend. “Arlo and Spot journey through a world that has been greatly inspired by the American Northwest,” said Sohn. “It is epic in scope, soul-enriching and simultaneously beautiful and treacherous. In this world, we meet up with a very special family of T-Rexes, who help Arlo find a way through his personal fears and ultimately teach Arlo what he’s truly made of.”

A TRIO OF T-REXES — An Apatosaurus named Arlo must face his fears—and three impressive T-Rexes—in Disney•Pixar’s “The Good Dinosaur.” Featuring the voices of AJ Buckley, Anna Paquin and Sam Elliott as the T-Rexes, “The Good Dinosaur” opens in theaters nationwide Nov. 25, 2015. ©2015 Disney•Pixar. All Rights Reserved.

International superstar Shakira is lending her Grammy®-winning voice to Gazelle, the biggest pop star in Zootopia, D23 EXPO fans learned via a taped message from Shakira today. Ginnifer Goodwin (ABC’s “Once Upon a Time,” “Something Borrowed,” “Walk the Line”), the voice of the film’s rookie rabbit officer Judy Hopps, saluted fans alongside directors Byron Howard (“Tangled”) and Rich Moore (“Wreck-It Ralph”),  and producer Clark Spencer (“Wreck-It Ralph”). Hilarious new scenes from the film were unveiled, plus a tease of the all-new original song, “Try Everything,” written by singer-songwriter Sia and songwriting duo Stargate, and performed by Shakira.

Said Howard, “For the role of Gazelle, Zootopia’s most beloved superstar, there was only one person on our wish list: Shakira. Luckily for us, she said yes. Her immense talent and charm bring Gazelle and her song, ‘Try Everything,’ to life.” 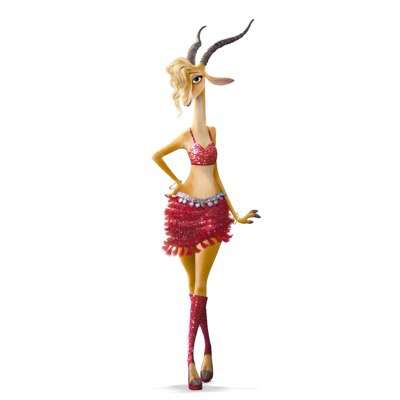