Son of Monsterpalooza, the annual horror convention was held this past weekend and MTF Contributor, Paul headed down to check out all the grizzly fun. Conventions can be a blast and Paul even brought along another horror nut… His grandmother! All together now… Awwwwwww…

I love cool grandmothers! I miss mine desperately.

Anyway, check out Paul’s recap below!

Arrived at Burbank around 9:30am and ate at the dreaded Denny’s by bob hope airport. I think they changed management because it was actually pleasant! Weird! Anyways, we finish there and get in line for will call (btw I brought my grand mother who is a huge universal horror fan)

We run into on other grapher and chat while in line, then one of the few annoyances start… my name is not on the list (not the first time for monsterpalooza this has happened) I bought my tickets as soon as I saw the Texas Chainsaw Massacre cast reunion and I’m glad I took a screenshot of the confirmation. 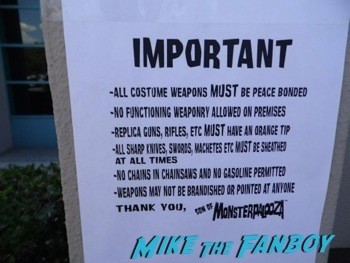 First we see the Stan Winston display featuring props from his films. It’s a regular display. Next was a great puppet display featuring the puppet from goosebumps (just binge watched on Netflix, so I was a little excited over slappy)

Next I see the suit actors from the 85-03 Godzilla pictures… Ok… not as good as last year. Next the scream great himself TOM SAVINI!!!!! Now I’ve met him before and he’s very direct and not the friendliest to most fans but he’s cool with me. I just had one thing for him to sign, my Jason figure. I got Kevin bacon to sign and he was thrilled and I had my grandmother take a photo with him. 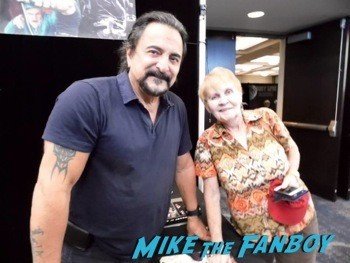 Next was Bela Lugosi Jr. now if you’ve ever seen a starstruck old woman… that was my grandmother and she’s not modest at all. She sat next to him and talked for a good half hour about his father and the wine and life.

Next, William Vail and Terri McMinn where just awesome! they played Kirk and Pam in Texas chainsaw massacre! The funny thing about the Tcm people is there is so much documentation on the film and being one of my favorites I couldn’t think of any questions to ask! 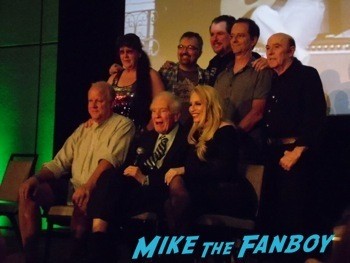 Next was leatherface himself Gunnar Hansen who is intimidating at first glance and his handler wasn’t the most pleasant but it’s a horror convention so I forked over the extra money for him ($40 for any large item to be signed and $20 for photo op which I declined) So my grandmother got to speak with him about how I had her watch the film and read his book and he liked that. Later I would actually get have a decent conversation with him.

Next was going through the main section which wasn’t that impressive same vendors as always. I did stop by dick smiths booth and offer condolences (we lost both him and tcm’s Marilyn burns this year) 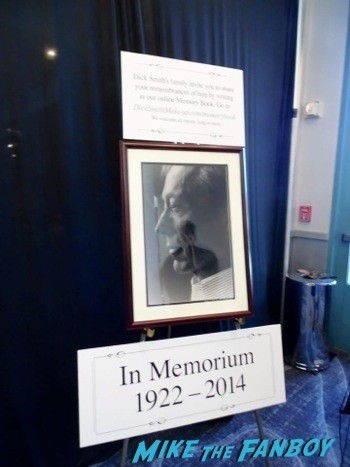 Next was meeting the cast of day of the dead. I first I heard Joe Pilato aka Rhodes shouting lines which is always awesome. Then I got him to sign my bub figure after I persuaded him to after that zombie shot him in the movie and next was Lori cardille aka sarah she was one of the nicest people I’ve ever met at one of these cons and definitely a great reminder of why I go to these.

Next I wanted to see the amazingly talented iconic clive barkers art exhibit and run into grapher DVD Dave on the way nice!!!

Ok now I am photographing the art which is large collection wish they framed them but it works so am walking and noticed a booth holy f* ck unnanounced Ashley Laurence and she’s sitting at a booth charging $30 for a signature and $20 for a photo op damnit next time! 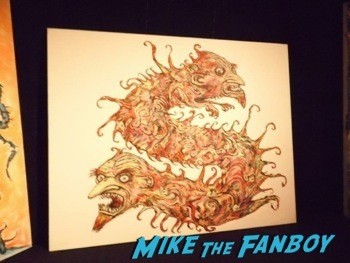 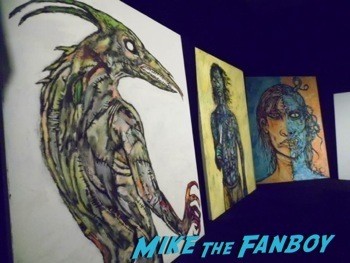 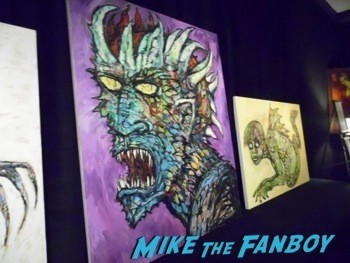 We then proceed to the frankenstein’s bride (Elizabeth) reimagined which is very impressive about 100 different mold reimagined pieces of the bride. 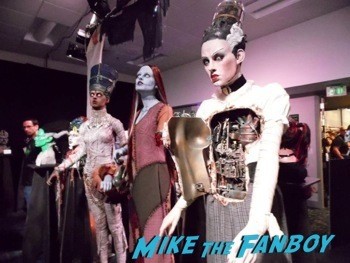 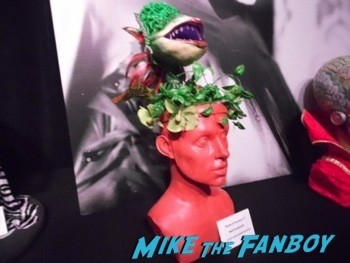 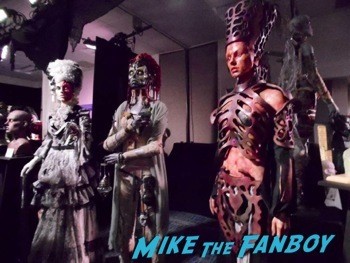 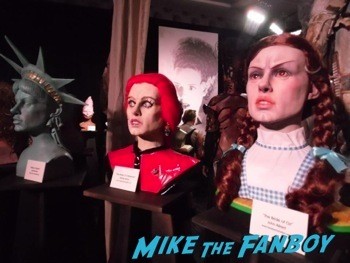 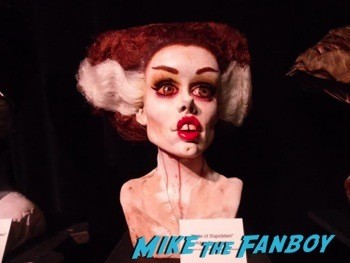 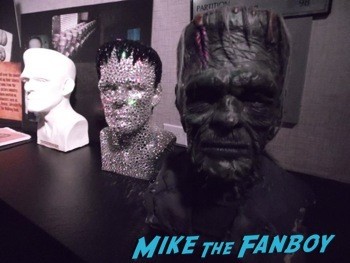 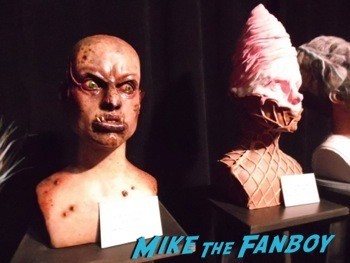 after that we head into the conference room for the day of the dead and phantasm panels which were both amusing and great day had some great stories and phantasm showed clips with mystery science theater type banter from the cast. Great stuff! 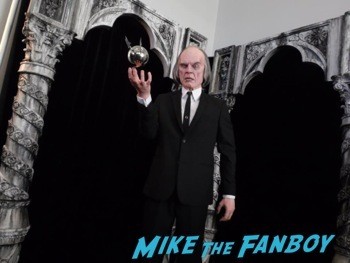 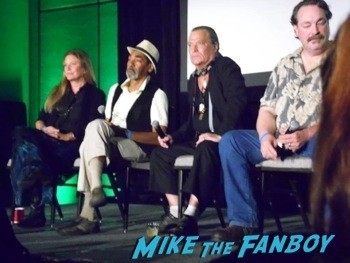 Then we left to get some coffee (iced it was close to 100 degrees outside) and while exiting I finally got to chat with Gunnar about Hollywood chainsaw hookers and how I’ve been trying to meet him for years and blah blah blah fanboying all over him so we get coffee and come back but are too late for the costume contest and call it a day. 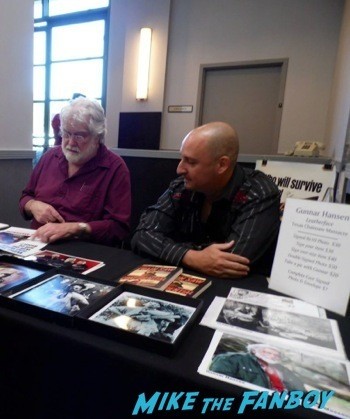 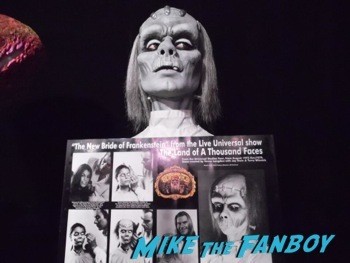 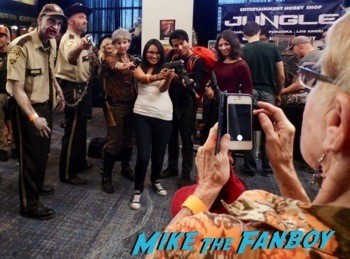 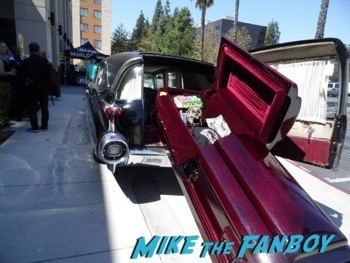 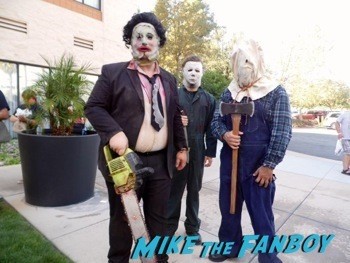 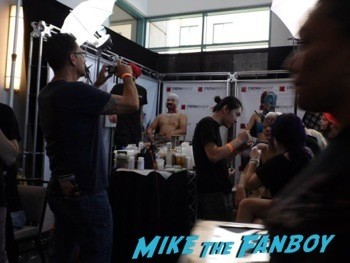