Today, is a super shitty day… Dude, you don’t even know… I’m driving to meet Mr. Anton Yelchin and Zoe Saldana when I see flashing lights behind me. I’m like, WTF! So, I pull over… And the officer says, I was holding my phone. I said, no that’s an I-pod, he says, “I saw your jaw moving.” I was like yes, I have a headset… See… And I show him the headset… He grabs my insurance and license… not registration ironically, and heads off and writes me a ticket… Now, I was on the phone, but had a headset on. I was so pissed…

I have NEVER had a ticket before, I’m anal when I drive… I’m so upset, and driving to park. I stop at a stop sign, make a left and what do you know… I get pulled over again… This time I didn’t stop for the required five beats. This officer said, I “Flew through a stop sign…” Is there like a dark cloud over my head today? The second officer was really nice though, and only gave me a fix it ticket for a brake light that’s out, that I didn’t know about… He even called the first officer a dick, which I appreciated. But I will admit I’m a little worked up.

5:39 p.m. – I brought a Complex magazine and my Colombiana mini poster for Zoe Saldana. I’m a huge fan of hers, and I’ve heard lately she wasn’t as nice as she used to be. Although I have met her a couple times and she’s always been cool as far as I’ve seen.

5:54 p.m. – I should probably repost that article… hmmmm I sense a Mike The Fanboy Flashback!

6:02 p.m. – Everyone was kinda spread around but the barricades are now up and the masses are lined up.

6:13 p.m. – CB is going to get a sharpie in the eye. He just told me he found a gray hair. You know why… I get grey hair’s because of CB! GRRRRRRRRRR… 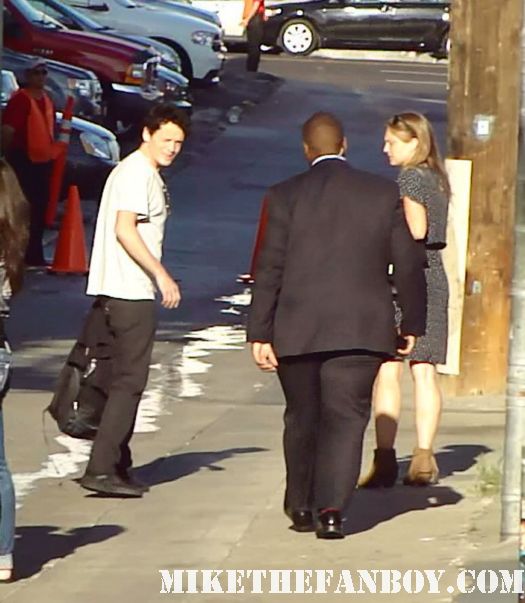 6:15 p.m. – Oh crap, there’s Anton Yelchin! No one see’s him! lol… CB and I start yelling and everyone joins in. Anton turns and mouths, “Hold on one second.” He disappears into the gate. 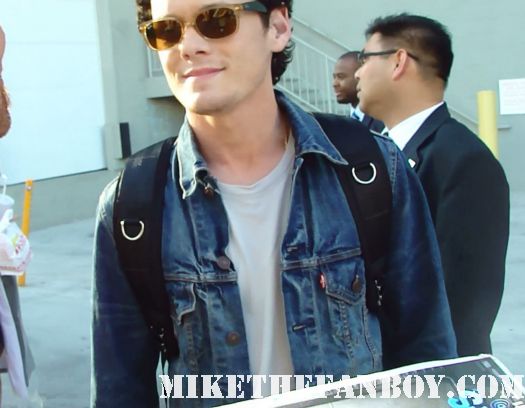 6:19 p.m. – CB has like 15 things for the guy, lol… No I’m kidding, but he gets a couple things personalized. Scotty didn’t have anything so he got my Fright Night poster signed. I got my Star Trek poster and my Individual Fright Night mini poster done. 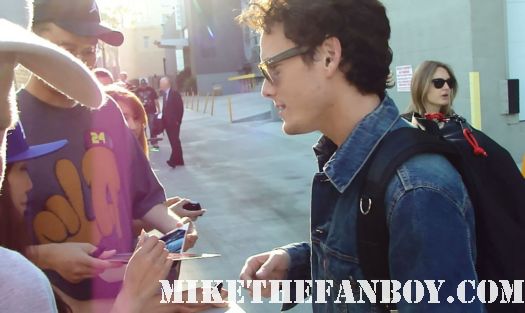 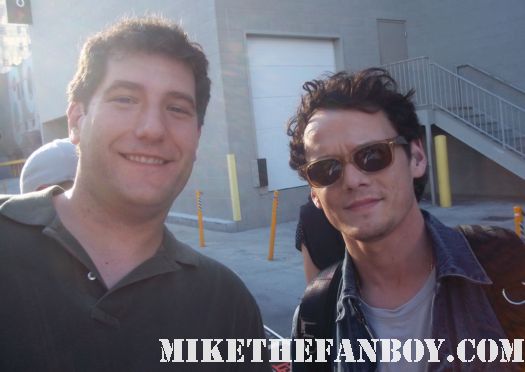 6:20 p.m. – I told Anton Yelchin how much I enjoyed Fright Night and he was very thankful. Such a nice guy. He seems very humble. For being in Terminator and Star Trek, I’m shocked at how cool he is. 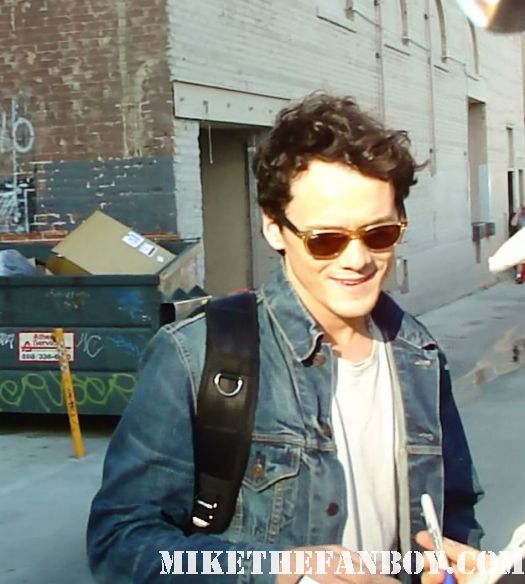 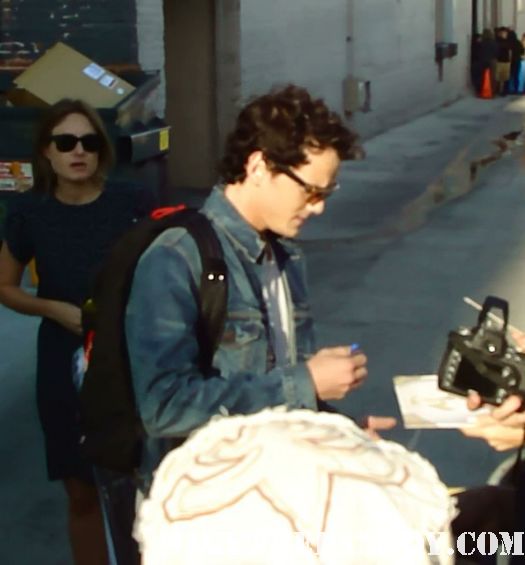 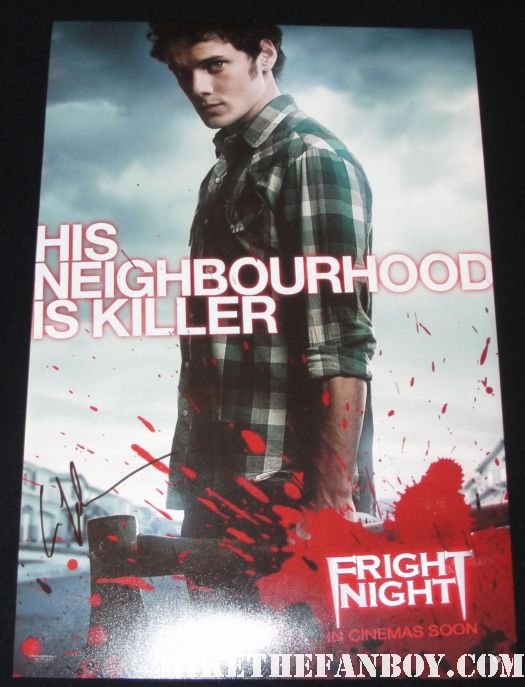 6:23 p.m. – And Anton is still signing away. he’s doing the entire line. Photos and everything. Such a stand up guy. I always appreciate it when stars are cool to their fans. 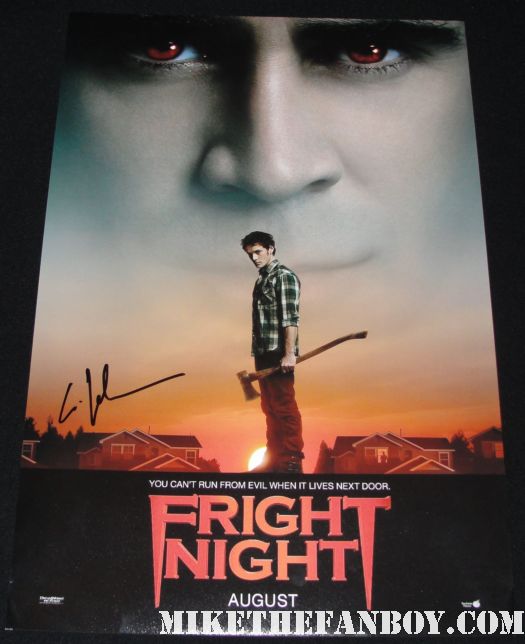 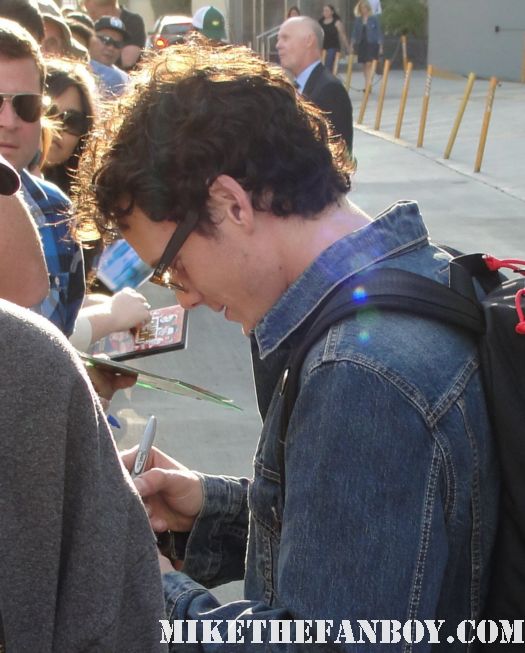 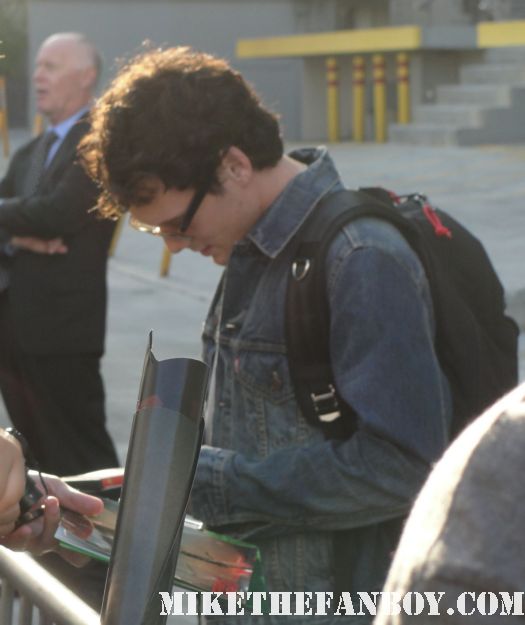 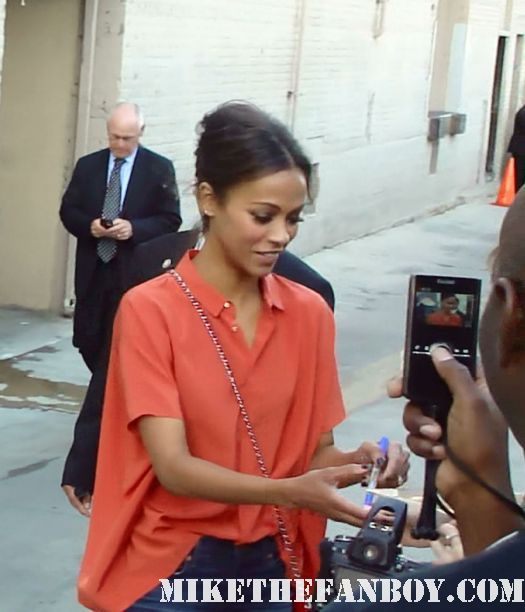 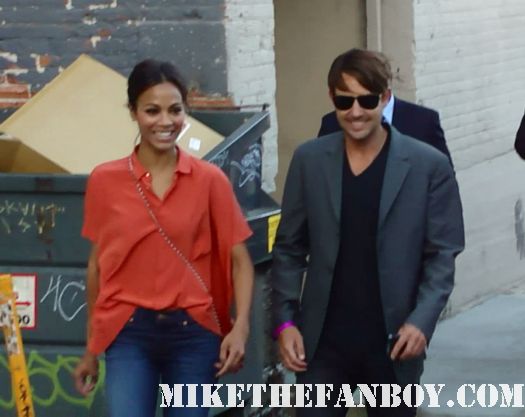 6:35 p.m. – She is signing pretty much one per person or taking photos. Man, what to do, what to do… I know I look like crap today, so I’m going with getting my Colombiana poster signed. I’m stoked to see it. The previews look great! 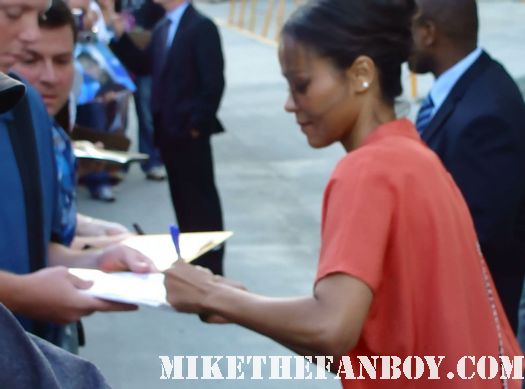 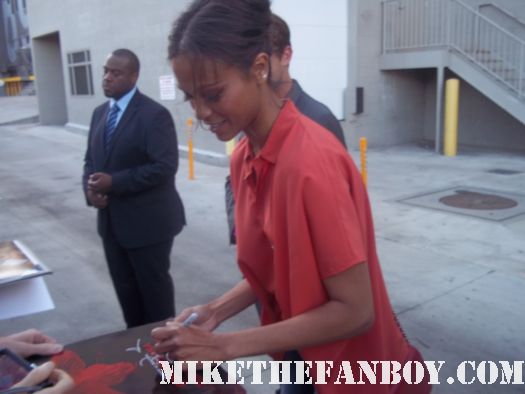 6:36 p.m. – Zoe Saldana signs for CB and then looks super happy to see the Colombiana posters Scotty and I have. She even did a cute xo on the top of mine. 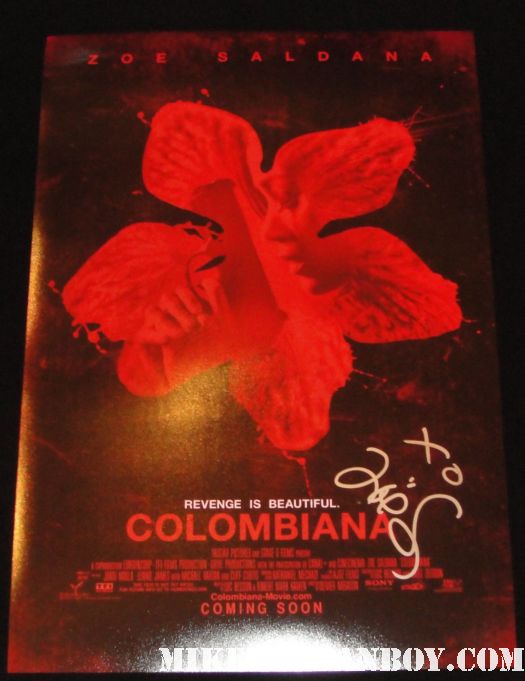 6:37 p.m. – Wow, she is literally doing the whole line, I’m very impressed! I didn’t expect her to come over and not only did she come over she came over on the way in! Rad! 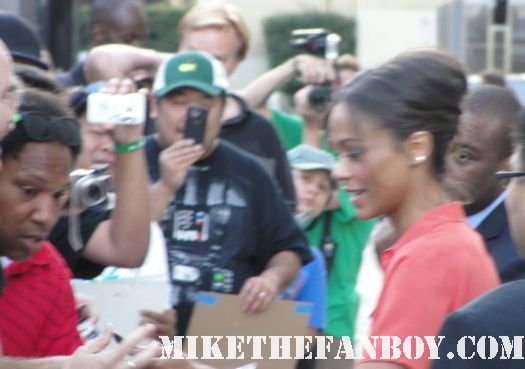 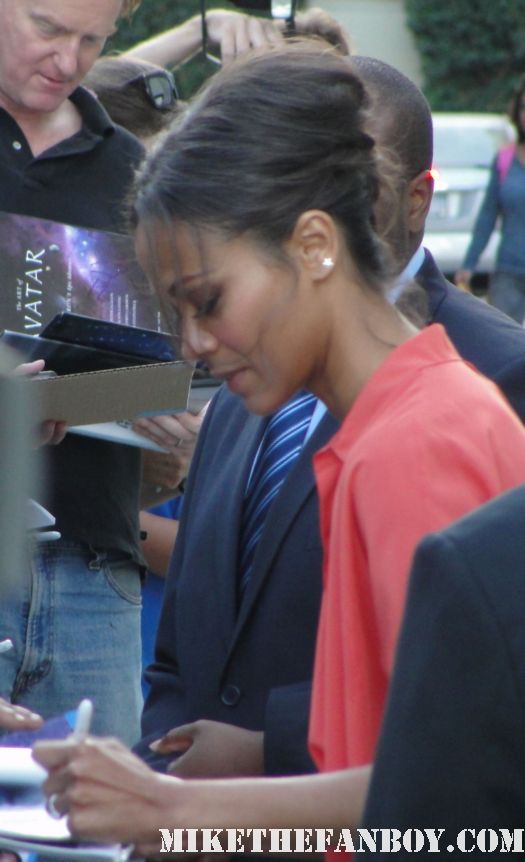 6:39 p.m. – Zoe is moving fast but making sure everyone gets at least a photo or autograph… I’m very impressed with her I’ll tell you! 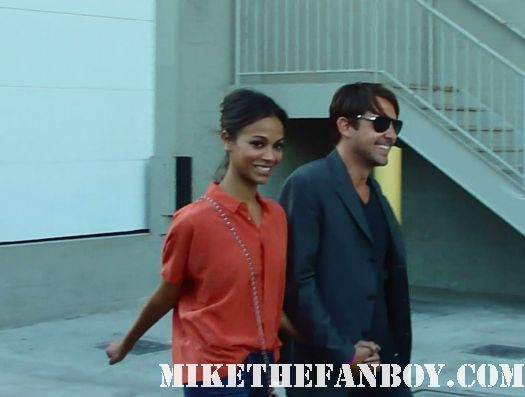 6:45 p.m. – That’s it! She finished the entire line and then waves as she goes in. One of the fans hands her a Star Trek rubber bracelet as she passes by. I’m so happy we didn’t have to wait all night! It’s really rare when there are two people on a show I care about but really rare when both of them come over in the beginning! 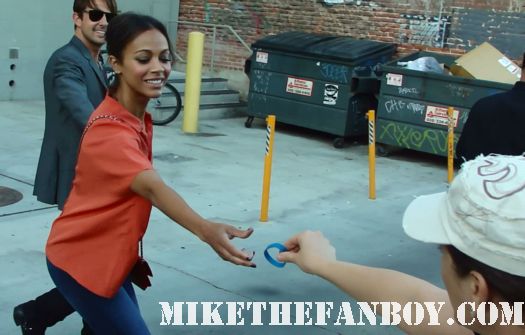 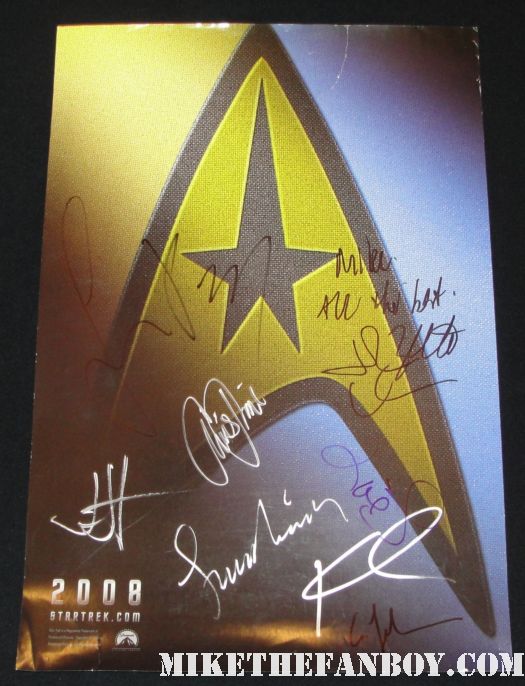