Saturday, January 11th was a big day for Outlander fans as Starz threw a wonderful fan event in anticipation of the new show based on Diana Gabaldon’s beloved series.  It just so happens your “TV Heartbeat” Erica and “The Novel Strumpet” Alicia are huge fans of this series so we decided to do a joint review of the event. 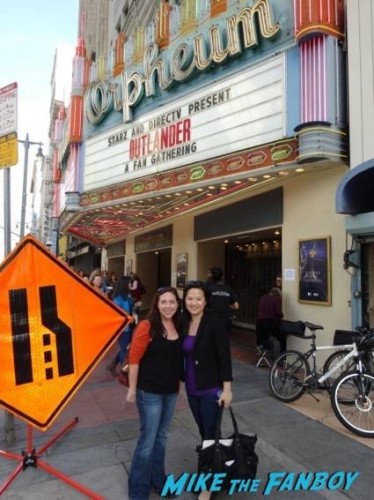 Note: The entire audience were fans of the book so we discussed spoilers pretty freely. Since we’re re-capping highlights, the same goes for here! If you haven’t read the book, there are major spoilers so you have been warned!

To start off, we thought it was really well organized.  They held the event at the lovely Orpheum Theater in downtown L.A for around 1200 people.  We walked around the line to capture any fan made goodies (sadly not a lot) and at 2 pm it was up to 900 people.  Some had been there since 10am waiting to line up. 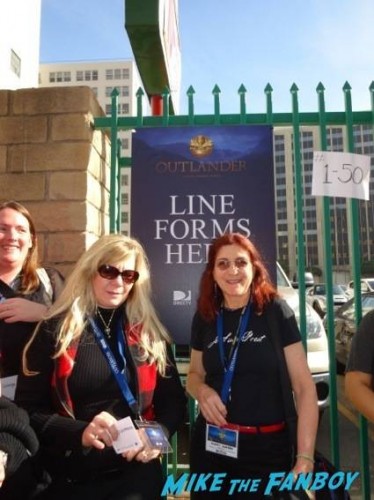 The mood was jovial, excited — stories were being shared, some had brought well-loved books hoping they might get Diana Gabaldon to sign them (Novel Strumpet: Like me and even though this day was not the day, one day I will get her to sign my book!) and of course men in kilts! 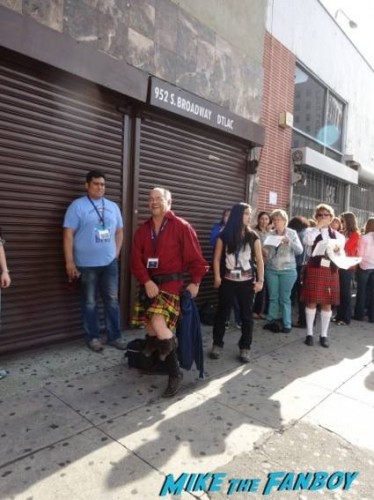 We estimated the ratio of men to women at 1:20…LOL!

They started letting everyone in around 3pm, we grabbed our passes and went to our seats.  Once settled, we took off to check out the lobby, which had large posters of some of the images that have been released.  Of course how can one resist getting a pic with Mac Dubh himself – James Alexander Malcolm MacKenzie Fraser? 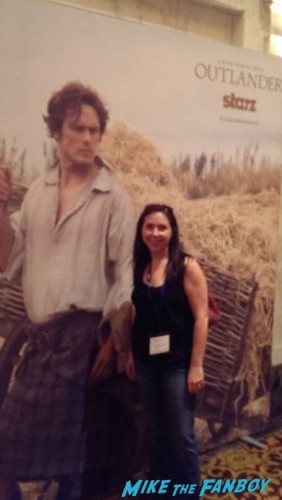 We mentioned it held a lot of people…right? 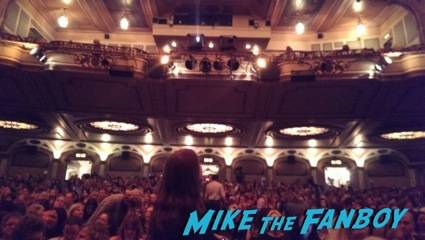 By 4pm everyone was seated and it was time to begin!

Novel Strumpet:  The one thing I really wanted was bagpipes….AND THAT’S HOW THEY OPENED THE SHOW!!!!

Erica: I was really happy for Novel Strumpet, but had to restrain her from storming the stage…no really.

The event’s moderator was Alicia Quarels whom we’ve mostly seen on E!  She did a good job of balancing her own questions with those from social media and in-house, although they jumped topics a lot and she couldn’t remember Caitriona Balfe’s name to save her life.  (Kept calling her Claire, Kaitlin or Kate, even after Caitriona corrected her.)

Side note: Diana Gabaldon calls Sam Heughan “Sheugs” because her son’s name is Sam and it gives her “cognitive dissonance.” 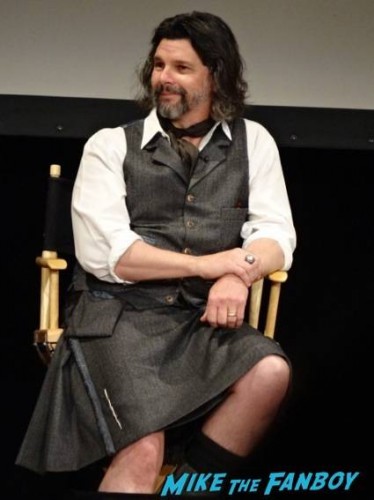 Erica: Loved what Ron was wearing – his wife (the head costumer) talked about styling him for this event. He looks very suave in a formal gray kilt.  He looked comfortable in the outfit, despite the very high director’s chairs, which aren’t made for guys in short kilts.

Novel Strumpet: The front row got quite a different “show” between him and Sam 😉

Before the panel could start, the crowd sang “Happy Birthday” to Diana since it was her birthday. She was very gracious about it.

The panel began with some general questions and a look at some of the concept art for the show.

Erica: This was familiar news for those that attended the New York Comic Con events or caught the TV Heartbeat re-cap of Outlander at NYCC.

Alicia Quarles asked how they’ve kept such a tight lid on production, Ron said “they shoot people”…lol…then they showed us the first look at the trailer!

After that they brought out Sam Heughan (Jaime) and Caitriona Balfre (Claire) to another standing ovation and another kilt “show.” 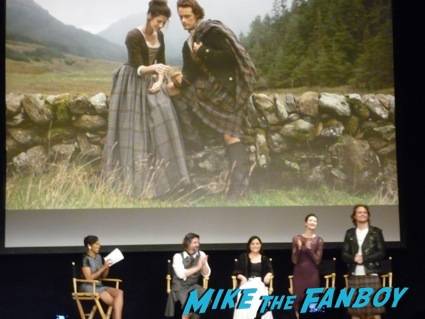 Then the panel started in earnest.  Some of our favorite moments by category:

On Filming, Writing and Costuming:

Ron went over how he got started with the project and mentioned that some of the writers were in the audience, which got the crowd excited.  He kept emphasizing all the things they were doing to keep as faithful as possible to the book:

NS:  I liked how Ron kept reiterating how they’re going to try and keep as true to the book as possible.

E: Do you think he will be faithful?

NS: * shrugs*  I really hope so.  I’m trying to keep an open mind and not get too bogged down in judging it too closely to the book.

E: I have faith in him as a showrunner and he certainly is taking great pains with the material.

When asked about reading Ron’s pilot script Diana said: “This is the first script based on my work that I ever read that didn’t make me either turn white or burst into flame.”

Novel Strumpet: That should give us some peace of mind that they’re doing something right, yes?

E: I think Herself is being very sincere with her support so we should all feel that this is in the right direction.

The biggest deviation mentioned so far is how they’ve re-set the time of year since they started filming in fall in Scotland. It’s now winter and it’s pretty impossible to disguise Scotland in winter as Scotland in summer. (Diana nodded along and is fine with this tweak.)

After getting laughing earfuls from wardrobe when he writes scripts that say “they quickly changed and left,” Ron filmed a montage of Claire getting dressed in full 18th century clothing — which took all day.  Sam joked that in Scotland, undressing was considered foreplay.

Sam, who was wearing a modern MacKenzie tartan, talked about the versatile nature of a kilt because they were also used as sleeping bag, pockets, shawl, camouflage, etc.

They got into a little about the use of Gaelic in the show.  Caitriona mentioned that she speaks Irish Gaelic which is a different dialect than Scots Gaelic, so her and her costume girl (also Irish) can have secret conversations together (which Sam says is a little troubling).  LOL.  One of the audience questions to Sam was about his favorite Gaelic word.   The answer made the entire audience melt….well, just watch:

Erica: Lots of pressure on this wedding scene

Quarels asked Ron how much of the sex and violence from the books would be in the show:

Talk turned to Caitriona’s and Sam’s takes on Claire and Jaime.  Caitriona said she liked getting a role like Claire because “she’s just badass.”  One of the audience questions was how Cait and Sam felt they were different than their characters:

Caitroina told the story of purchasing Outlander from her local book store and her experience with the unsuspecting clerk:

Cait and Sam also talked about their initial reaction to the news that they got the part and how they celebrated, or didn’t, upon hearing they got the roles:

They also talked about the scenes they looked forward to filming:

Erica: Action Claire, not Dr. Claire, Medicine Woman. I think everyone wants to see the wedding/wedding night, but I’m also excited to see where Jaime brings Claire to the stones and tells her to go, and the reunion after.

Novel Strumpet: It may be a little sadistic of me, but I’m looking forward to the big beating/torture scenes because they are such pivotal moments in the lives of the characters and show the brutality of the era.  It’s a nice contrast to all the romance everyone keeps talking about.  Btw, I’m not alone…

For some unknown reason, Alicia Quarels asked Diana about laying the groundwork for “Fifty Shades” and “Twilight,” since, in her twisted logic, all three book series feature strong male and female characters.  The audience booed the question and Diana politely said: “Thankfully, I’ve never read either.”

Novel Strumpet: How do they even compare?!?! Good answer Diana, good answer.

Some of the other highlights was the announcement that Bear McCreary will be doing the score, Diana met Sam and Caitriona just a couple of days before the event and the fact that Sam and his brother were named after characters in Lord of the Rings.

Novel Strumpet: Which would be Samwise right?  Evidently extreme loyalty is a theme here…. ;P

The panel finally wound down (after nearly 90 minutes which was amazing) and they just couldn’t resist bringing out a birthday cake for Diana:

But the fun didn’t end there!  Once the panel was over they had a tea service for the attendees.  This was really the only clusterfrack of the night that I noticed.  I mean 1200 people are trying to crowd around tables to get tea and goodies: 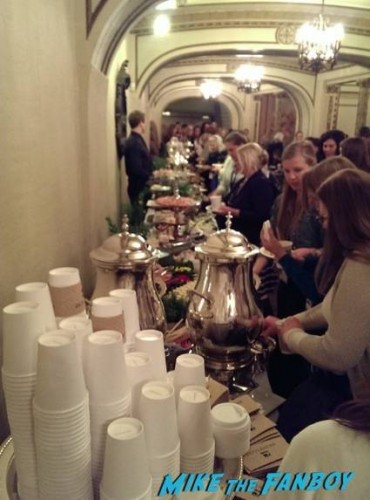 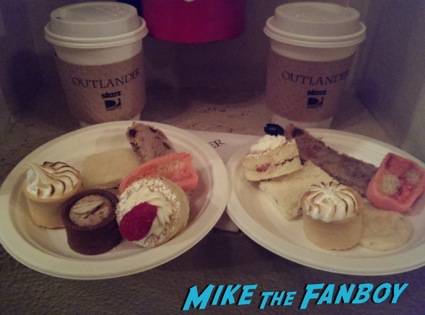 Erica: But we did have cucumber sandwiches with the crust cut off.

After tea and snacks we decided to see if there was a chance we could get the cast, or fingers crossed the author, as they were leaving.   No Diana Gabaldon or Ron Moore but Caitriona and Sam came over to say hi to the fans: 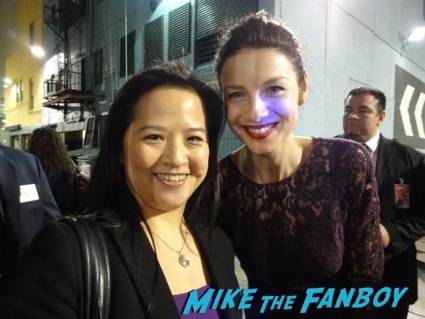 E: It was very spontaneous so it was great that they came over. Caitriona was very sweet with everyone. 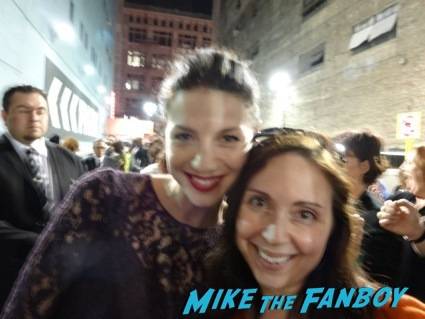 E: Sam was wonderfully patient w/fans and took a lot of selfies with them. Until he got slightly freaked when someone wanted to get rather personal…ugh! Hopefully she didn’t freak him out permanently…

NovelStrumpet: Yeah, it went from chatty to  “Oh, look at the time…gotta go guys“ LOL 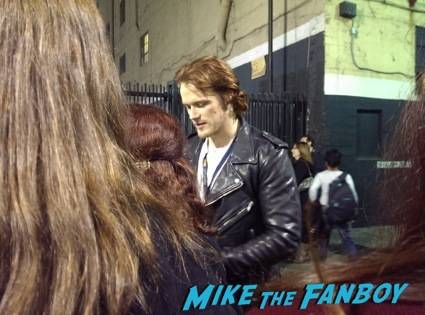 Then it was over.  Sadness.  Until “summer 2014” arrives and the show finally starts!

Here’s a little cuteness that’ll have to tide us over for a while — it’s Sam giving us “Jaime’s Wink”:

Novel Strumpet:  Well I have to say it was a lot of fun and a really pleasant experience.  I feel that conceptually the series is in good hands and am even more excited about the show than I was before.  I’m still not sure how Cait and Sam will do as their characters but I’m holding out hope.  Much to the horror of you all, Starz gave us #PocketJaime’s as we walked out and GAME ON!  They have no idea what they’ve unleashed…mwahahahahaha….

Erica: I felt reassured about the direction of the show after talking to Ron and Diana back in October. It was great to see Caitriona and Sam and see how well they understood their characters. They seem to have fun with each other so I can’t wait to see the on-screen chemistry.

How are YOU guys feeling about the show? Excited? Nervous? Scared? Let us know!