This week, a lot of events were happening all over the place. Scotty and I opted to head back down to Palm Springs for a screening of the Post. There was going to be an introduction by Steven Spielberg, Tom Hanks and Meryl Streep.

That’s a pretty amazing list for just a screening at Palm Springs.

We got there and met up with Lindsay and Chris who also headed down.

They were letting everyone stand right on the red carpet for a bit and Lindsay and I got interviewed for the news.

Scotty and Lindsay did a too cute photo on the carpet! 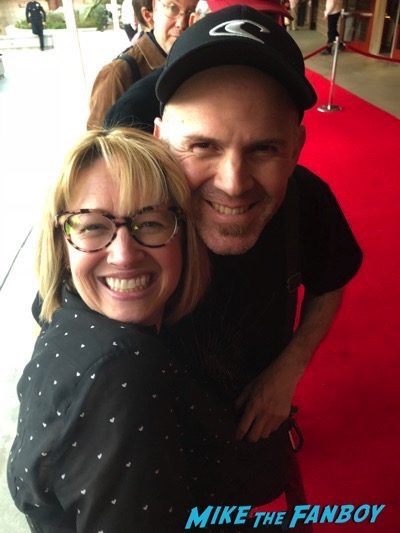 The staff was cleaning the red carpet… in the finest bowling shirt allowed. Nothing but top notch here. 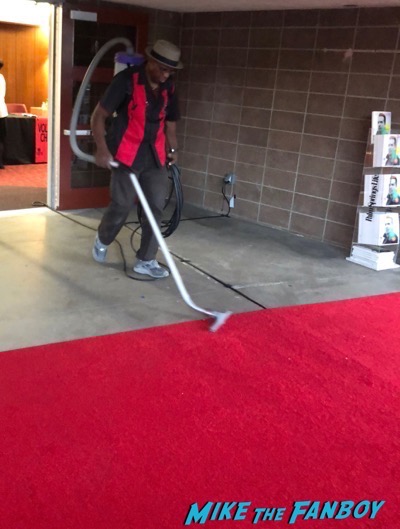 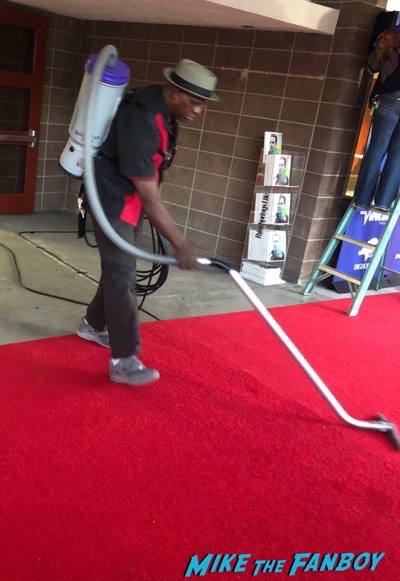 Then we were all booted off the property. Nice. In fact, they threatened to call the sheriff on us.

So, the subtitle for today’s recap? “Back to the bush.” which is where we had to stand behind. A bush that was full of pickers and was pretty thick. In fact, you could say it was a thicket.

But I like saying back to the bush, so let’s go with that.

It didn’t stop the high school drama department from trying to sell refreshments to the fans waiting. 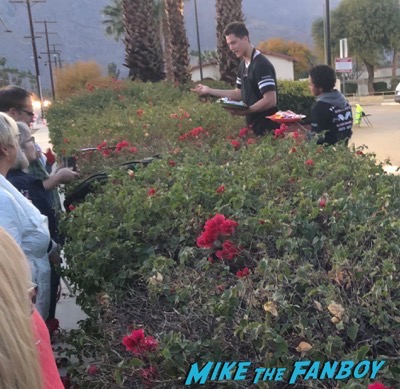 You have to admire their fortitude. 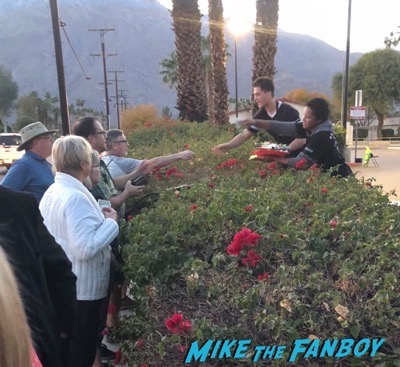 We weren’t that far from the drop and people arrived and SUV’s circled.

Finally, we saw someone and it was Steven Spielberg. He waved and went on the mini carpet to do interviews. One girl was very adamant about yelling and Steven pointed over our way a couple times. 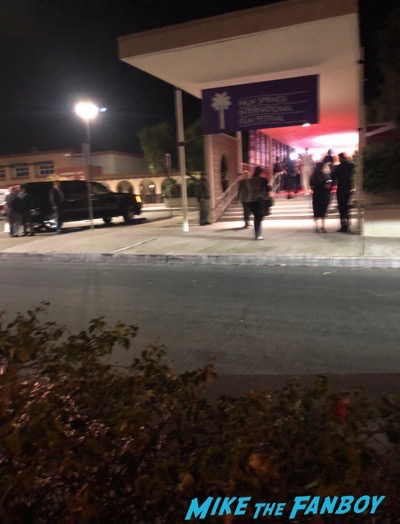 No Tom or Meryl in sight. #Shocking

Then, Steven Spielberg came on over and signed up a storm. The man was a machine. I was a little tentative because the bush and/or thicket was so scratchy I didn’t want to put a photo on top of the pickers and get it messed up. 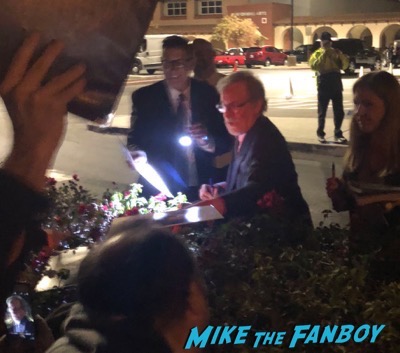 Steven signed multiples for everyone, He finished my Raiders of the Lost Ark poster that I already had Karen Allen and Harrison Ford on, as well as my Last Crusade poster I had Harrison Ford on. 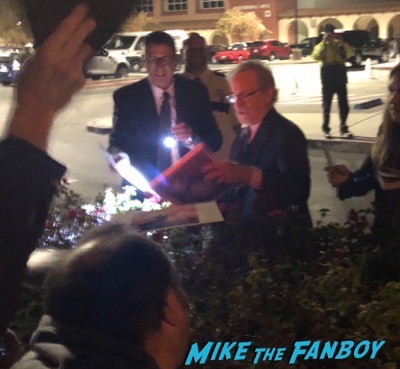 Sadly, he signed on the “d” in ford on my Temple of Doom poster which devastated me even though everyone said, it wasn’t that bad.

Steven did say, “Guys, I did more movies than Jaws!” after seeing so many Jaws posters. That was pretty funny.

It was an epic night even though there was a slight devastation about the Ford graph. You can still see both, but Ugh…

Steven Spielberg was super nice, he went over and above!

Tom Hanks and Meryl Streep? They were driven to the very back of the auditorium so no one could see them and didn’t even do the carpet. Uhh Huh… 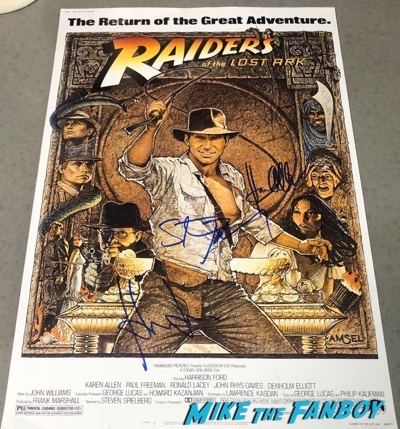 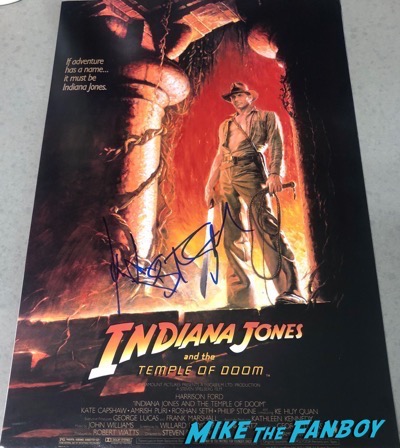 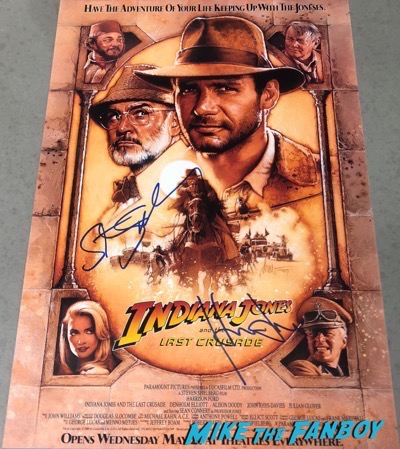 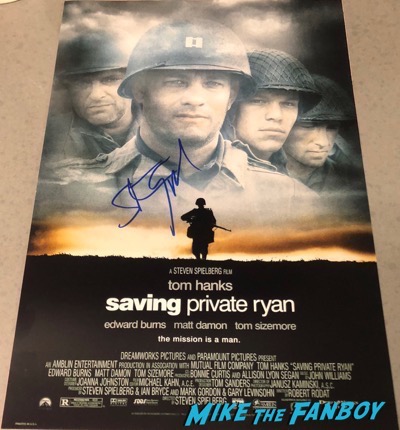 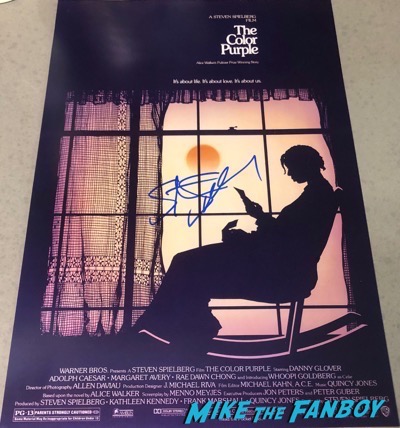