Awww I love hearing stories like these! Suddenly Susan just sent in this report where she was able to meet Mr. Jeffrey Dean Morgan. Now, I’m sure most of you know how awesome Jeffrey is to his fans, like uber nice, but Susan never had a chance to meet him and see the awesomeness first hand… Plus, the girl got a kiss from The Comedian. Yep, saliva being exchanged.

If it wasn’t some some pushing and shoving from dealers it would have been a perfect evening! Sigh.. Why.. WHY! They really do ruin everything.

Check out Susan’s report after the jump!

I would die to get a kiss from Jeffrey Dean Morgan. I’m sure many fans have actually said that aloud, while others have quietly thought it. Last night, it just about came true for me. I got a kiss and I almost got killed, crushed to death by a trove of DBHs. What’s a DBH? That’s my own pet name for a “professional” dealer, or douche bag hound, and this place was soon to be ripe with ‘em.

The Magic City premiere was at a new location for me, so I had no idea what to expect. I left work early, another pesky doctor’s appointment (insert sneaky smile here) and arrived a little over an hour before the red carpet. Only 4 other people were there. My good pal, CB, a dealer who I don’t mind so much and two DBHs I had never met. These were the kind who you look dead in the eye, ask what time it is, and they completely ignore you. Yup, true DBHs.

Now even though I’ve been doing this for awhile, I still act like a newbie sometimes and my naivety astonishes me. There I was thinking this isn’t bad at all. This will be good. This will be easy. Just you wait the logical part of my brain should have said. I’m only there for Jeffrey and I’ve heard time and again how super nice he is, so I’m very optimistic. I’m a fan of Danny Huston too, so I brought along my Wolverine DVD cover. Stop snickering. Any movie where Hugh Jackman is naked or half naked is an auto purchase for me. Back to JDM. Wow, I’m really into the anagrams tonight. Anyway, one of the event planners asked me if I’m we’re here for signatures. I said, “well, I am”. She says she’ll try to get a barricade or something up for us. Now we’re really cooking with gas.

Two college intern looking fellows bring out a velvet rope and make an L shape with it. CB and I line up along it and I turn to see about 6 dealers are crammed into the corner where the rope angels. I guess their logic is that everyone will come to that one little corner then. I’m still not worried, as I doubt JDM will stop signing before he gets everyone. After about 10 minutes, I turn to see a crowd of 20 or more dealers. I swear, they’re like fucking gremlins that someone threw a bucket of water onto. They just keep multiplying!

Right on schedule, the arrivals start. Dominik García-Lorido is up first. I don’t know, or care who she is, so I actually duck down so people who want her can get to her. See what a nice person I am? Some child on the show is up next, Taylor Blackwell and she is sweetly signing multiples for the two people asking her, when I hear, “there’s Jeffrey”. I see him! He’s the definition of a real man. FYI kids, I am into the rugged, manly type. No metro, pretty, or girly men for me. The crowd is strangely calm, as if they know they’ll get whatever they ask for from good ‘ol Jeff. Since he is working his way down the line, I am actually second to last, which turned out great because I think I got more time with him. Now, there’s a certain loud and obnoxious dealer out there that everyone knows and pretty much everyone hates. This person has never done anything to me personally and who I have to credit for getting me my Ed Norton signature. This same person is telling Jeffrey how long I’ve been waiting, how much I like him, etc. I am filled with embarrassment and keep yelling for him to shut up (I tried not to give away the gender, so have at it detectives). I got a beautiful signature made out to Susan with an X and an O – that’s a hug and a kiss, symbolically anyway. 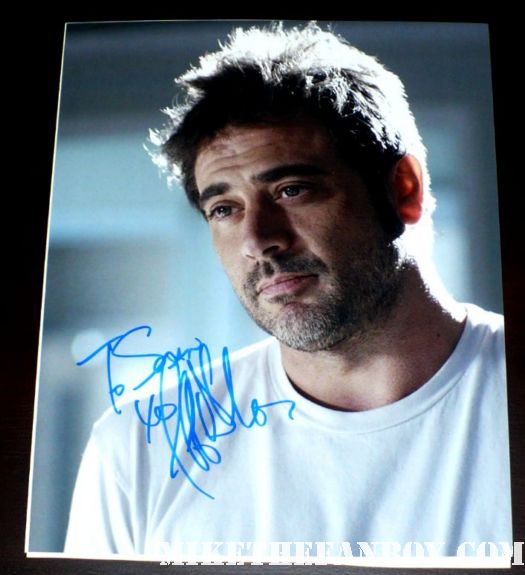 The next thing I hear from that dealer is, “all she really wants is a kiss on the cheek”. Before I can react, Jeffrey plants one on my face. Its takes my brain a second to realize that sudden moisture on my cheek is coming from his lips! The beard was scratchy, but totally worth it! He had a bigger smile on his face than me. I was speechless after that and my night was made. CB was awesome enough to take a photo of me and Jeffrey with his camera and send it to me. I was still reeling from the kiss and was too slow to get mine ready. Thanks CB! Arrivals are happening so quickly I figure I’ll stay for Danny. 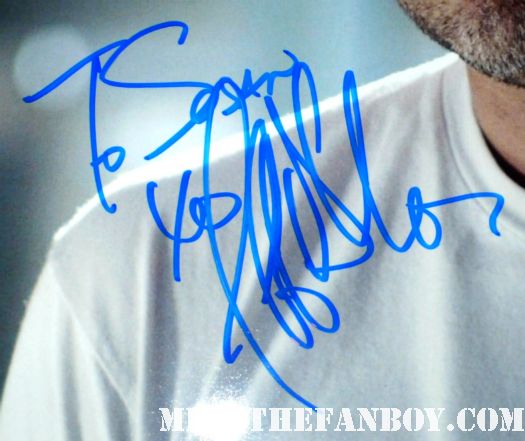 Then the madness began. I don’t remember what ordered they arrived in but Olga Kurylenko and Lynn Collins appeared. I was surprised for Lynn since she isn’t in this show, but there I was with my Wolverine DVD cover. The crowd went wild. DBHs were pushing, crushing, shoving, and screaming. You’d think she was handing out solid gold bars! I was getting knocked about and almost flung over the velvet rope. A security guard came to my rescue and ordered people back, who didn’t listen at all. They moved along the rope with her and continued crushing. Finally, the guard shoved one guy back and said “get off her,” meaning me. I have never been part of such a scene before, not even at Comic Con. I always thought if I were famous, I’d be super cool and sign and take photos for everyone. I see how it is impossible sometimes, honestly. 25 people screaming your name, and over here, and I didn’t get you, and the John Carter photo on top, with all kinds of things being shoved in your face. No thank you.

I decided then to get out before getting seriously injured. I may be about 3 pounds overweight, but I’m still small, only 5 feet tall, so I do not like big crowds. Then CB told me Danny had just arrived and called him over for me. Thanks CB! Danny came right to me first and I asked him to sign it to Susan, which he was happy to do. I moved out of there and let the wolves fight over the scraps for my spot. I said farewell to few peeps and got the hell out of there in one piece. 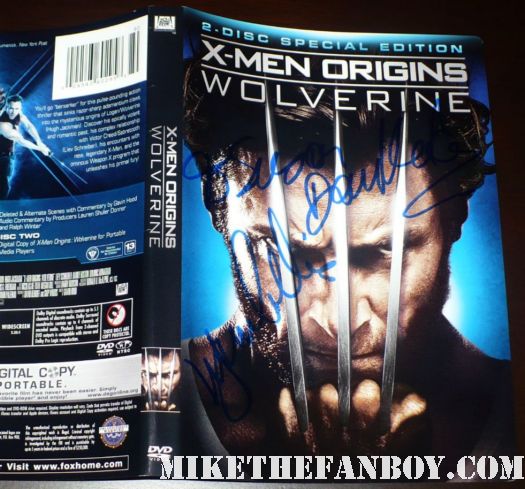 What’s one to do after such a fantastic evening? Stop off at Menchie’s for some frozen yogurt of course. As I’m picking out my toppings, I noticed a handsome teenager-ish kid getting his own. I recognize him from Wolverine. He played young Victor, aka Liev Schreiber, aka Sabretooth. How ironic that I have my DVD in the car outside and an array of Sharpies to use. However, he sits down next to a teenage girl and an older woman. Her mom? His mom? Nope. Not gonna do it. Too weird and too embarrassing to possible get shot down by a teenager in front of other teenagers in the shop. That’s not the way I wanted to end such a successful evening. An uber successful evening indeed.