I have been reading all of Jack’s posts regarding his success at Paleyfest this year and finally broke down and am going to go to at least one event on monday, when in my hot little inbox comes a new report from Suddenly Susan!

Susan was able to attend The American Horror Story panel which I believe led the Paleyfest this year. Now, this cast isn’t the best autograph signers in the world… Cough… Cough… Francis Conroy told me to my face she thought “Autographs were weird” So, there weren’t that many high hopes for this cast! lol…

Check out Susan’s recap from the Paleyfest’s American Horror Story panel after the jump!

I can’t really complain. Paley Fests of the past have been VERY good to me. I have an almost complete cast signed photo of Freaks and Geeks, Community, Desperate Housewives, and The Walking Dead. I want to give special nod to the TWD cast. Their screening/Q&A happened just after the first few episodes had aired. The fan base was big, but not rabid (excuse the pun), not yet anyway. Talk about nice! That whole cast was fantastic to the fans after wards. I even got photos with Andrew Lincoln and Jon Bernthal. John actually lied down on the stage to be in the photo due to the massive height difference. They were so grateful that the audience had taken the time to come out and see them and that were watching and enjoying the show. 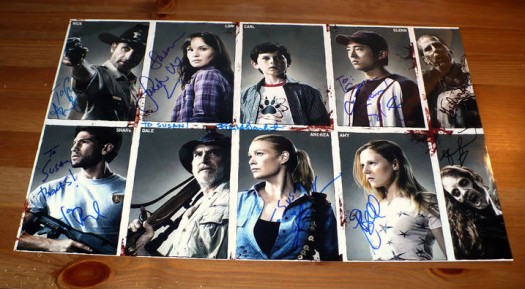 Cut to American Horror Story. Now, I’m no fool. I know there was no way in hell Jessica Lange was going to sign. But hey, I’ve only heard good things about Dylan McDermott. I was a little bummed that Evan Peters and Taissa Farmiga weren’t on the guest list. I enjoyed their characters the most. I was, however, pleasantly surprised that Frances Conroy showed up, as she was not listed. 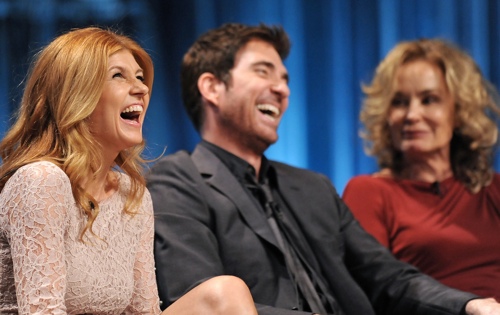 They screened episode “Birth” and the Q&A afterward was funny, entertaining, and gave some insight for next season. Jessica Lange was an absolute riot, especially when a drag queen (what he called himself) was dressed as her character and asked a question from the audience. Jessica loved it! Since the cast was being so playful, things were looking bright.

The moderator was just wrapping up his, “thank you all for com…” and swoosh, the front was mobbed. I managed to get to the stage, even leaning on it, but was a bit down the right side. Not too bad, and at least I am in front. Some d-bag with TWO posters purchased at the event and taped to cardboard was to my left. He was taking up at least 3 feet, blocking 2 or more people to his right and left. I was just thinking I’m going to have a problem with this butt head, when to my shock and horror, the entire cast had scurried off stage! What’s this? No autographs, at all? 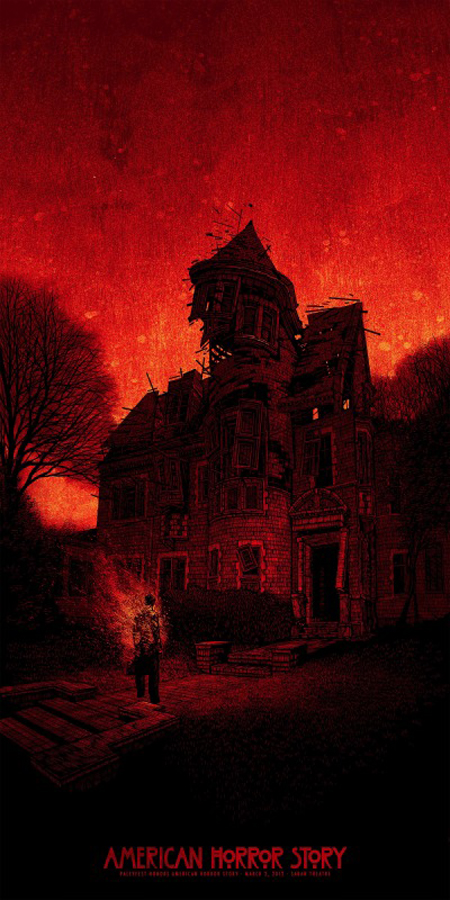 Lovely Alexandra Breckenridge was standing by her chair, looking like a deer in the headlights, as if she had never seen an autograph swarm before. Geez, woman, this is all part of the fame train, so get on board! She’s quite nice and starts signing for people. I nearly pulled my arm out of its socket to get my photo over douchey poster guy’s, but I am able to and she signs for me. I can tell she wants to leave, but everyone is clamoring to get her. Someone tells her “thanks for being so nice,” and she says, “Well, not really”. It’s super awkward. She definitely wants to go, but feels bad. She’s staying out of guilt. But hey, I’ll take a guilt fueled signature any day. It is sweet of her to sign. Then, she says, “Well, you guys came out tonight to see us.” She looks to the other side of the stage and says, “Oh, now he’s being nice.” I can’t see anything, but I hear its Dylan. He signed a SMALL handful on the far left side and retreated back. Security comes and tells Alexandra five more and actual counts them out loud. True to his word, he pulls her away after five. Eight cast members, one signature. Too bad because I had a pretty cool 11×14. 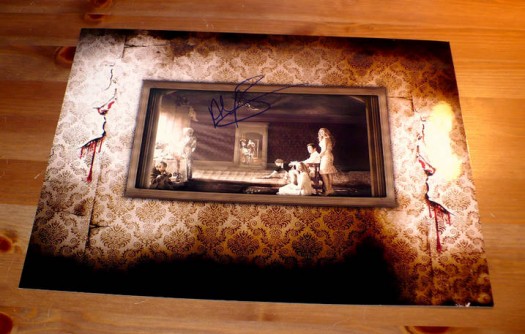 I’m not sure if it the Paley people are trying to discourage signings, or if the security that night was being particularly hard ass, or if the whole cast gave us a big F-you. Who knows for sure, but it was the most disappointing Failey, I mean Paley fest yet.