I can’t remember a film that really has relied on the name of its producer and director to get people interested in going to see it like Super 8. It’s kind of a phenomenon really…

Anyway, there were some surprises! Cloris Leachman! Really! And a really fun write up, so good job CB!

This is definitely a must read kids!

NANANANANANA CB, CB, CB! Wow, today I am pumped up, because today is the Super 8 Premiere. I really don’t know a majority of the cast; I’m mainly going for one person, STEVEN FREAKING SPIELBERG! I wouldn’t mind J.J Abrams or the lovely Aly Michalka though. I can’t even begin to tell you how big of a fan of Steven Spielberg work I am, but because it’s Steven Spielberg, this was also the HARDEST premiere I’ve ever prepared for. I had no idea who might show up, so I took the best guesses I could. I had my Super 8 poster, a photo of Steven and George Lucas, a photo for Aly and even a photo for Tom Cruise, on the rare chance he shows up. Well, I’m taking a lot more stuff than I usually take, but let’s hope for the best.

4:00: I arrive here and my good friend Victor saved me a spot in line. He’s a huge Tom Cruise fan and I told him, bring your photos just in case. It’s a really peaceful day, but everyone is here for Steven. That’s cool, me too. 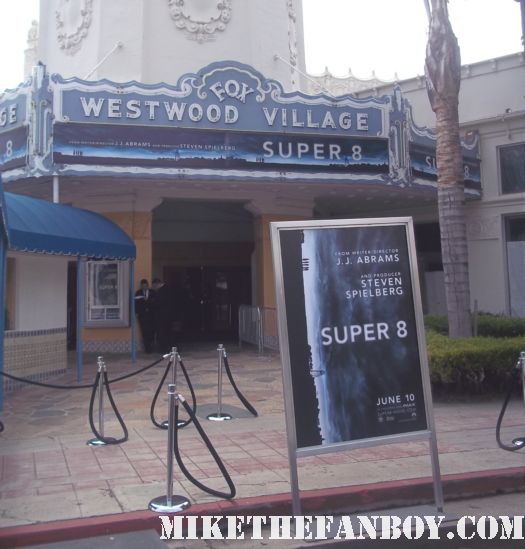 6:00 we see the press people enter their pen, so the evening should start soon. 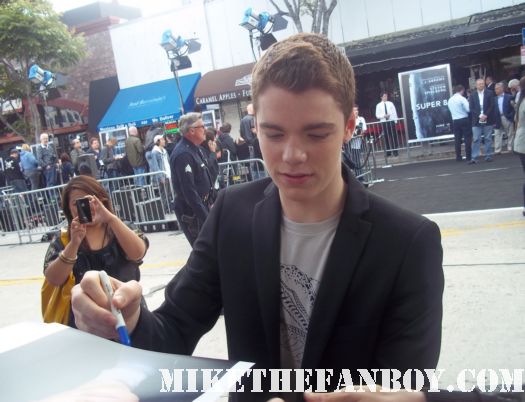 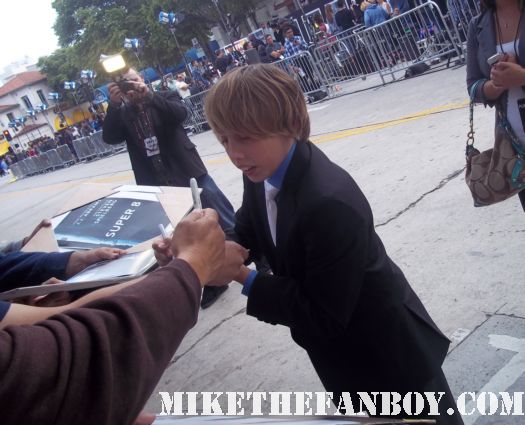 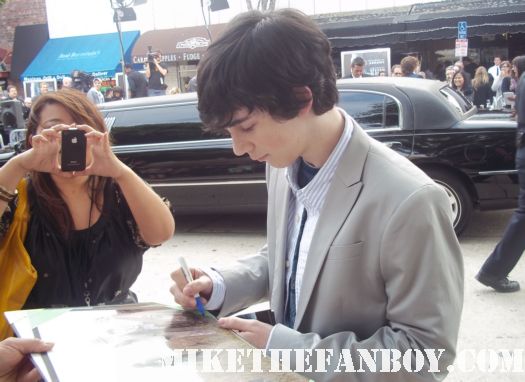 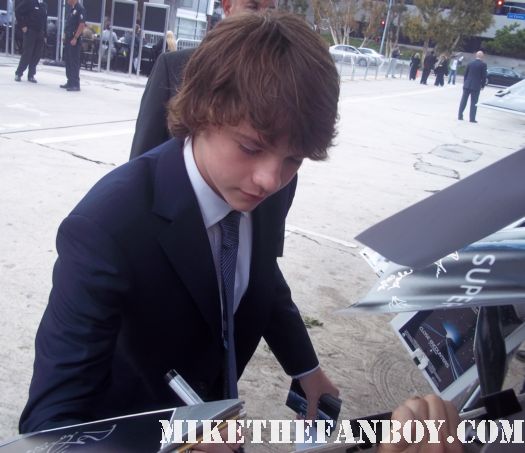 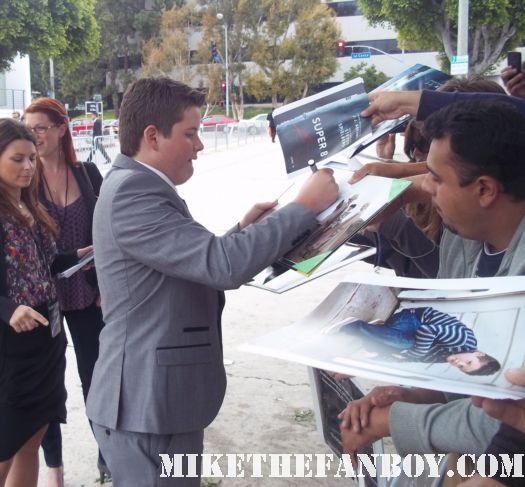 (Editor’s Note: CB told me he didn’t know a lot of the Super 8 cast because they were all kids, and relative newcomers. But They include, Gabriel Basso from The Big C, Ryan Lee, Zach Mills, Joel Courtney, and Riley Griffiths M-)

6:50: WOOT, Aly and AJ Michalka Arrive. I love Aly, and HellCats is my guilty pleasure…Oh yes…..Did I mention how gorgeous Aly is??? DID I???? They both come and sign together. I get Aly to sign my photo and AJ to sign my poster. 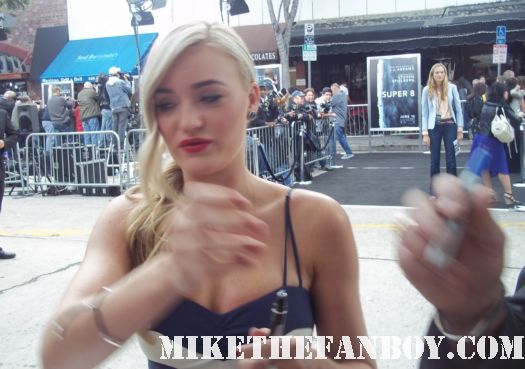 I also ask to take a photo with AJ, which she does. SO AWESOME!

6:53: I see a tall lanky redhead, its Conan O’Brien! We yell for him and he doesn’t come over. YES, I can go to my car and get the Rolling Stone with him on the cover in my car…some dorkus gave it to me….. 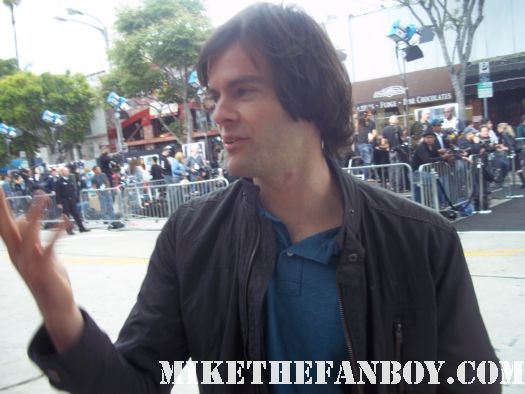 We yell for him and he comes over. I have nothing for him, so I take a photo with him. 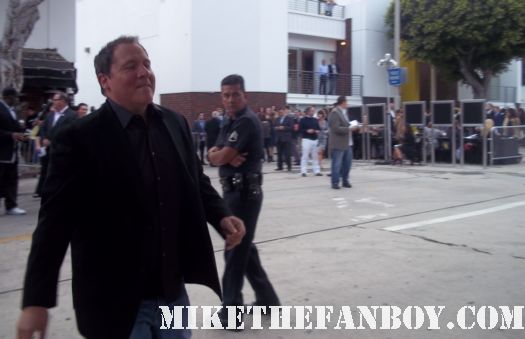 6:58: OMG, ITS JON FAVREAU! We yell for him and he comes over as well. I had nothing for him, but got a photo with him. 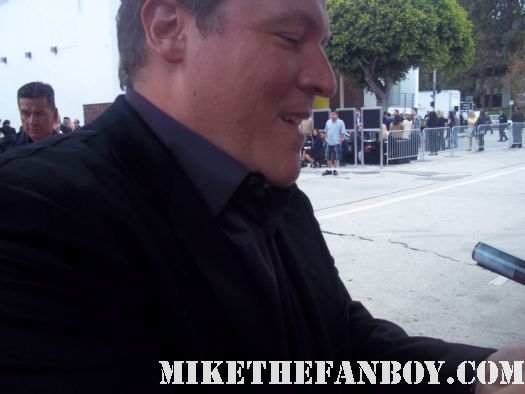 7:00: OMG, ITS MICHAEL BAY! We yell for him and he comes over too. Once again, I had nothing, but I get a photo with him. 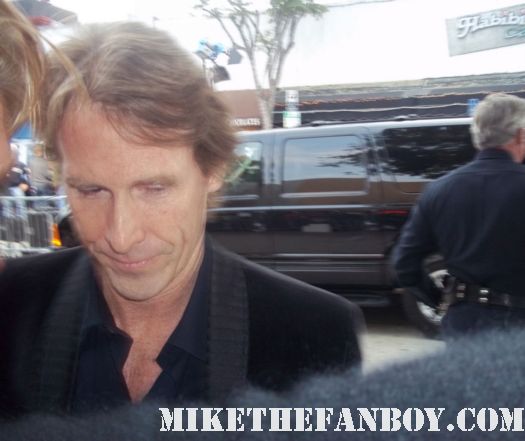 7:10: Hey, It’s Elle Fanning. She does some pictures first, and then comes over to sign. She’s so nice. 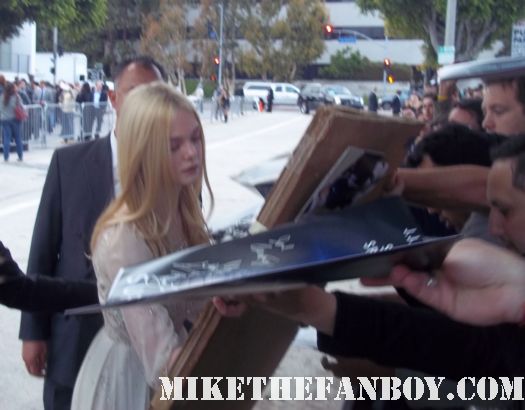 7:15: Another Limo arrives and it’s J.J Abrams. He waves, but goes right to the carpet. Dang.

7:20: An SUV pulls up and there he is, STEVEN SPIELBERG!!! We roar, ROAR for him, and he waves and does the carpet. DANG!

7:30: OMG, another SUV pulls up and its, TOM FREAKING CRUISE! YES TOM CRUISE IS HERE! Victor is freaking out, but Tom doesn’t cross to sign.

7:45: I’m supposed to head out and go somewhere else, but I decided to stay because Tom Cruise is here, and Spielberg and Abrams didn’t sign.

10:05: First one I see leave is CONAN-DO himself Mr. Conan O’Brien…I yell for him (CB note: I ran to my car to get the Rolling Stone issue) and he comes over and signs it and takes a photo with me. so, so happy.

10:10 Next out is Steven Spielberg, and guess what, he comes and signs for my section. 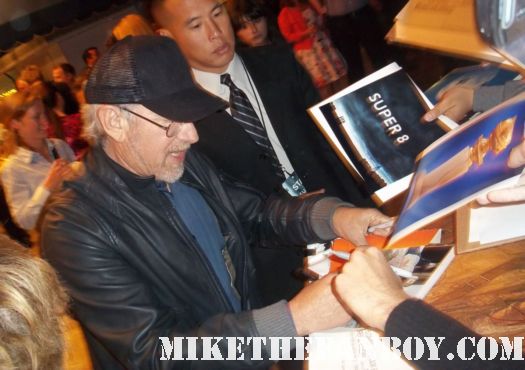 Problem is, he’s only three people away, but he’s only signing in that section and not moving…..Enter Cloris Leachman. SHE IS A DOLL. I LOVE HER, LOVE HER. She took my photo to get signed by Steven, and he did it. She then took my poster and got Steven to sign it too. I LOVE YOU CLORIS! 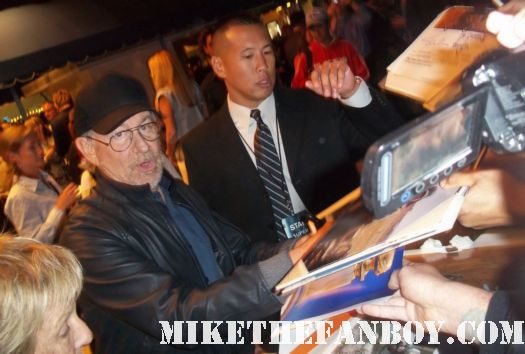 If it wasn’t for Cloris Leachman, I would not have got Steven Spielberg. Cloris Hugs Steven and follows him into the party….

(Editor’s note: dude, that is too funny! How awesome is Cloris Leachman! M-) 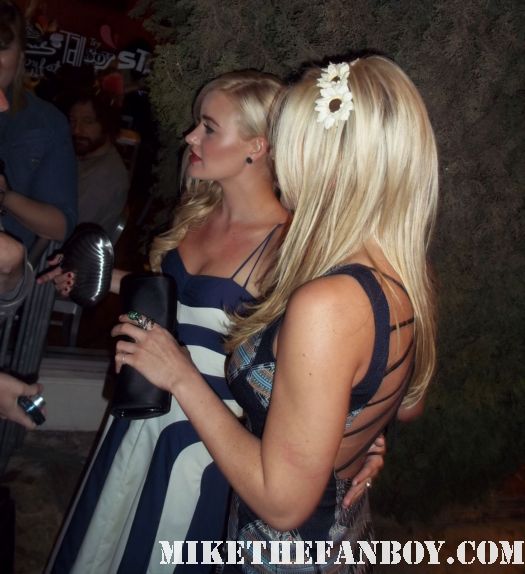 I finally get my photo with the beautiful Aly. She’s drop dead gorgeous. Yes, I told her, HellCats is my guilty pleasure and she thanked me… 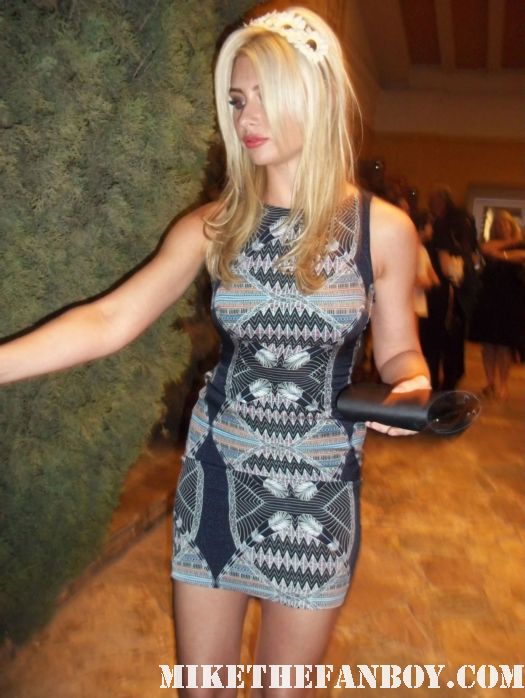 10:20: Tom Hiddleston is here. He plays Loki in Thor, and of course, I had nothing. So he comes over and takes a photo with me. He’s so so nice. 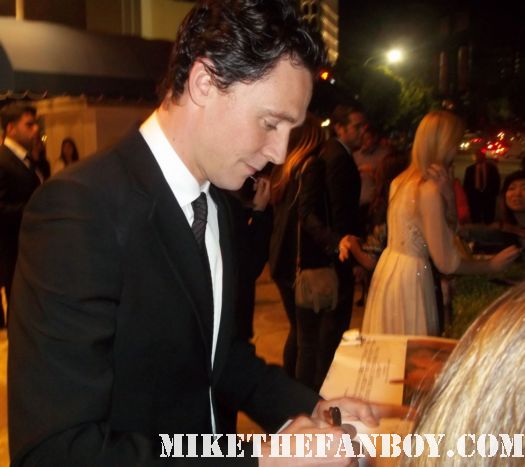 10:25: We ask around if JJ is still inside and he is. A few seconds later, he comes out and comes over to sign graphs. 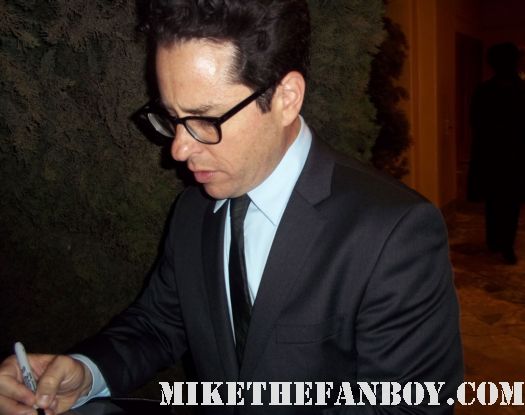 I get him on my poster and I complete it. I got everyone, the whole cast and the director and producer. I then ask for a photo with him and he obliges. 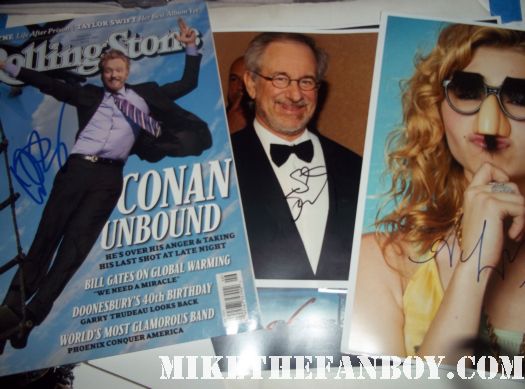 Man o man, was I tired. It was so worth it though to get Spielberg and Conan. I’m excited I got both of them. Everyone was awesome and I’m glad I can rest now. Until next time, same CB hour, same CB channel, same CB BLOG!!! KAAAAPPPPPOOOOOOWWWW! 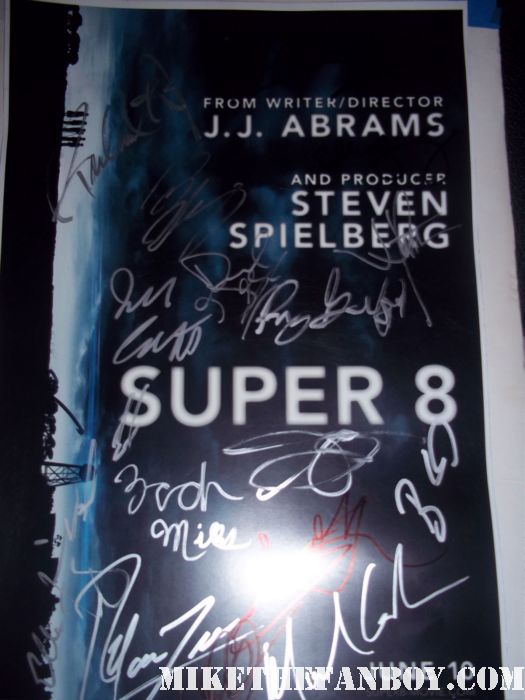