Home / NEWS / Superman Blasts Its Way Onto 4K For The 40th Anniversary! 4K Resolution with HDR!

TO BE RELEASED ON ULTRA HD BLU-RAY COMBO PACK

CELEBRATING THE 40TH ANNIVERSARY OF THE LANDMARK FILM AND

THE 80TH ANNIVERSARY OF THE BELOVED DC SUPER HERO, 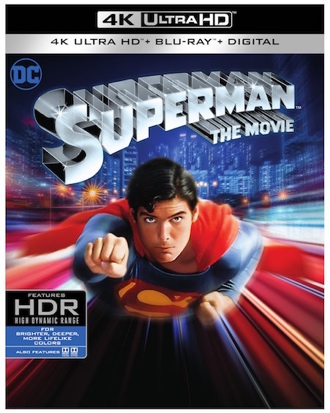 Based on the DC character created by Jerry Siegel and Joe Shuster, Superman was produced by Pierre Spengler from a story by Mario Puzo and a screenplay by Puzo, David Newman, Leslie Newman, and Robert Benton. Ilya Salkind served as executive producer. The film also features Ned Beatty as Otis, Jackie Cooper as Perry White, Glen Ford as Jonathan Kent, Valerie Perrine as Eva Teschmacher, and Terrance Stamp as General Zod.

Superman was nominated for three Academy Awards, including Best Film Editing, Best Music (Original Score) and Best Sound. The film also received a Special Achievement Academy Award for Visual Effects. In 2017, Superman was inducted in to the Library of Congress National Film Registry.

Academy Award winners Marlon Brando and Gene Hackman head an all-star cast in the fantastic, action-packed film that made Christopher Reeve an international star playing the greatest superhero of all time. From the doomed planet of Krypton, two parents launch a spaceship carrying their infant son to earth. Here he grows up to become Clark Kent, mild-mannered reporter for the Metropolis Daily Planet. But with powers and abilities far beyond those of ordinary men, he battles for truth and justice as Superman.

Commentary by Pierre Spengler and Ilya Salkind
The Making of Superman: The Movie 1978 TV Special
Superman and the Mole-Men
Cartoons
TV Spots and Trailers

On November 6th, Superman 4K UHD will be available to own for streaming and download to watch anywhere in high definition and standard definition on favorite devices from select digital retailers including GooglePlay, Vudu, Xbox and others, and will be made available digitally on Video On Demand services from cable and satellite providers, and on select gaming consoles.

*Digital movies or TV episodes allow fans to watch a digital version of their movie or TV show anywhere, on their favorite devices. Digital movies or TV episodes are included with the purchase of specially marked Blu-ray discs. With digital, consumers are able to instantly stream and download movies and TV shows to TVs, computers, tablets and smartphones through retail services like CinemaNow, Flixster Video, Vudu and more. For more information on compatible devices and services go to wb.com/digitalmoviefaq. Consult a digital retailer for details and requirements and for a list of digital-compatible devices.