There are cons that just seem awesome and I always say, “Gosh, I wish I went to that…” Then there are times when I’m like… God, I’m so glad I didn’t go to that! LOL… The latter is the case with Suddenly Susan as she headed down to Nuke The Fridge at Frank and Sons.

Susan has been wanting Stan Lee for a long time now and she thought this would be a great opportunity. Wow… What a hassle! I’m not even going to go on and on because Susan explains it quite well.

Take it away Susan!

I’d been meaning to check out Frank & Son Collectibles for some time now. I finally did so last weekend during their annual Nuke the Fridge Convention. I was pretty impressed with the size of the facility and the number of vendors. I’ll have to venture back another time because I barely got to look at anything. And that’s where the trouble started. 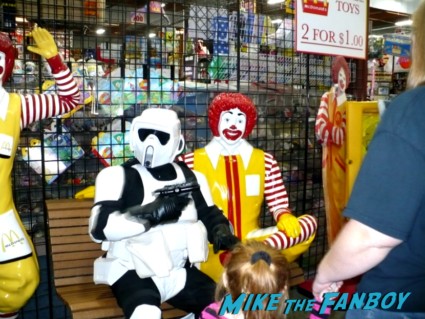 You see, I went with the sole intention of getting Stan Lee to sign this cool Hulk poster I have. I almost skipped this event entirely, because I had no details on the signing. It took a lot of digging, and believe me the information was buried deep, to finally find out autograph tickets for Stan were being pre-sold. The price was $45, which, wasn’t too bad. I’ve seen other venues charge $55 and upwards. The next piece of the puzzle was to find out when he would be signing. This was also buried deep, but after a few phones calls, I was told 10:00am. The warehouse doors opened at 9am, but I was told to get there by 7am if I wanted to find parking. Wow, really? Is this Comic Con I was attending? 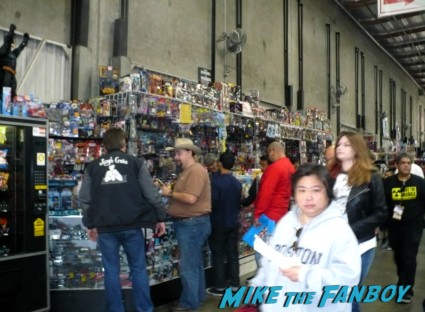 I sort of took the advice and arrived at 8am. It’s a very industrial area and I found parking in a Business Building’s lot, as they were closed for the weekend. I saw a bunch of people doing the same, so I figured it was ok. There was a fairly large line waiting to get inside. I was also told during one of the calls, that the autograph tickets needed to be picked up at ‘will call’ at 8am. Well, there was only one line and no one seemed to be aware of a will call line. I met a very nice gentleman in line and we chatted over the next hour before getting inside. We stuck together, the blind leading the blind, but better to be with someone in an autograph quest than alone, right?

It took us an HOUR to find the will call line for Stan’s autograph. We were moved back and forth from line to line, and by line, I mean cluster of people. Finally, a woman came by and took our printed receipt in exchange for our autograph ticket. 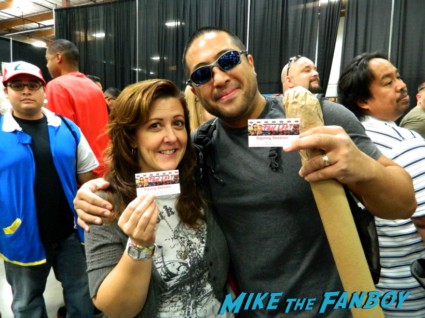 Within minutes there was a scalper with FIVE tickets he was trying to unload for $80!! That’s a $35 dollar markup. I never saw anyone buy one and I hope he left with all five and had to eat what he paid for them. Dick. 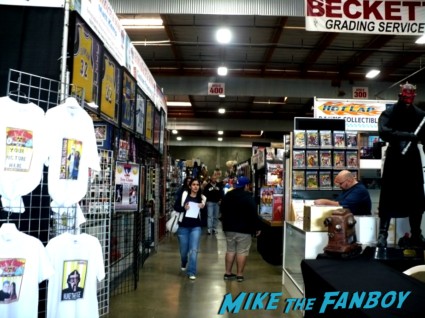 So yay! Now we have our ticket and now we are in the correct line! Should be smooth sailing from here, right? Oh contraire. They had run out of the Tensa Barriers to keep everything orderly, and we were at the back of them in a small herd of people. At around 10:40am there was an announcement that the man himself had arrived. The crowd went crazy. We couldn’t see a thing, but we saw people exiting with their signed goodies, so we knew he had started. We literally didn’t move for 40 minutes. Not an inch. Then I noticed the filtering of people on the far left side, all just cutting right in as we stood and waited like dum dums. Finally, we started inching up and once we had made it inside the barrier, things seemed to move a lot faster. 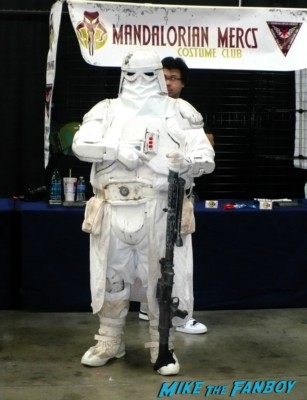 I have to say that Stan was looking terribly skinny. He’s a thin man, true, but the word frail came to mind. At one point he stopped and took a white envelope out of his pocket and unfolded it. He pulled some pills out and put them in his mouth. There was a soft, collective “awwww” from the crowd. I think it hit us all at once that Stan Lee is in fact, mortal. He chugged some orange soda to wash them down, holding the bottle with both hands. Then, the feisty artist we know and love was back, as he pounded the table with his fist and jokingly shouted, “ok, what’s the hold up here.” 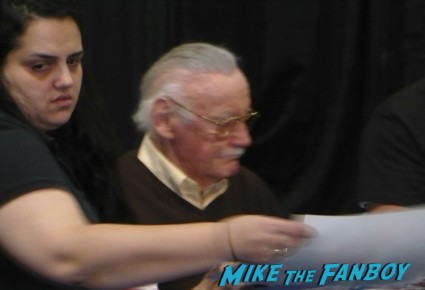 The actual signing moved pretty quickly and Stan’s “helper” was a nasty woman who clearly wished she was anywhere but there. We all know Stan is pretty set with money, so I truly believe he continues to do these things out of love for his fans. He enjoys meeting them, making them happy, and he sincerely knows all he has in life is thanks to them. I asked if I could have my poster personalized by the first helper monkey, but he said no. I should’ve just asked Stan to do it, but Attila the Hun probably would’ve stopped him anyway. It’s a real shame when you’re paying for an autograph, but can’t get it personalized. No matter. I got a fairly decent signature. 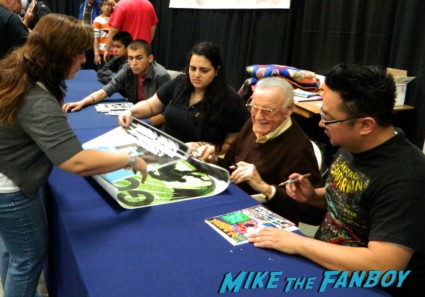 The Sharpie was at that in between moment of not exactly being dry, but not super fresh and new either. Stan was super nice, asking where you wanted the signature and what color marker to use. He ended with a smile and “thanks dear” to me, so a pretty good experience. From arrival to signature took 4 hours. Yes, four fucking hours for a pre-paid autograph! These people were not prepared for the madness, that’s for sure. 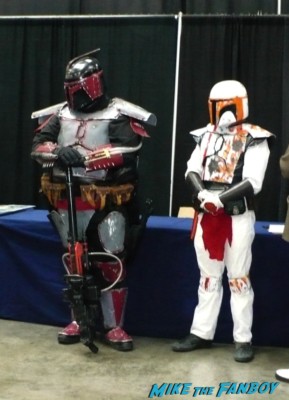 The most revolting display I have ever seen came after you got your signature. There were two lines: one for those who wished to exit and one to the PSA/DNA verification and comic book grading. Yup, that’s correct; once you got your Stan Lee autograph, you could walk right into a line where you paid more money to have it authenticated right then an there. They were basically saying, Stan’s going to die soon, so make sure you pay us to have your autograph authenticated so it will be worth more. Seriously, fucking, disgusting.

There were a lot of wrestlers and Playboy bunnies in the area signing (I’m sure Billy Beer can tell you who they were) and a few random horror movie “actors”. There was also a Willy Wonka reunion of the original (and only as far as I’m concerned) Veruca Salt, Violet, Mike TeeVee and Charlie Bucket himself! They also had pre-signed items from Augustus. I would have loved to get Peter Ostrum (Charlie), as I’ve never seen him at a convention before. He lives in upstate NY and works as a farm vet. However, the prices were too high. $40 for an 8×10? No thanks. 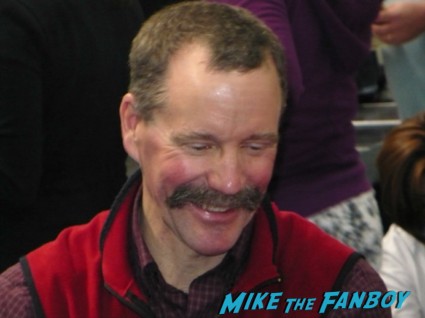 All in all, not a bad day for free admission and free parking. I’d love to check out what else they have to offer, but another time. After getting up at 6:30am, driving 45 minutes, and waiting 4 hours in line, I was pretty much done.

Susan Falls in Love With A T-Shirt! 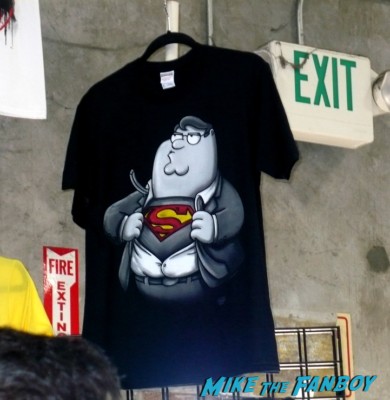 This Is For You Joseph Gordon Levitt!! 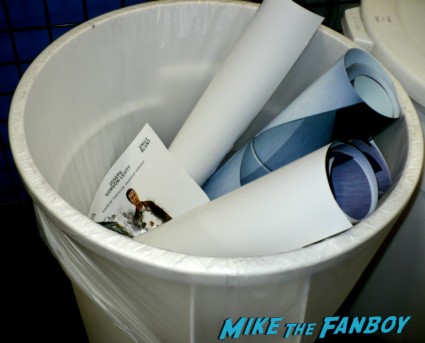