OMG! Anna headed down to the Sydney Oz Comic Con and got some of the best photos ever! First off, I love the picture she got with Anya and Xander… I mean Emma Caulfield and Nicholas Brendon. LOL…

The one with the guys from Veronica Mars jumping! It’s so cute! Seriously, amazing. You have to check it out!

Oh, plus a little actor by the name of Orlando Bloom! Rockin!

Sydney Oz Comic Con was finally here last weekend! I’d been looking forward to this weekend for ages since they announced all these amazing guests. Being a Veronica Mars fan I was super stoked when they announced Jason Dohring, Percy Daggs III and Michael Muhney.   I was also looking forward to meet Orlando Bloom, Emma Caulfield & Nicholas Brendon from Buffy and Mark Sheppard from Supernatural & White Collar. Other guests that were in attendance included Jason Momoa, William Shatner & Corin Nemec to name a few. It was a pretty good line up for the first time Oz Comic Con held in Sydney.

Being a Platinum Ticket holder, that my friends had gifted me with for my birthday I got to attend the cocktail event on Friday night. The party was quite busy and I got to speak and meet to people on my list except for Orlando Bloom as he did not attend. In summary, I got to hear some funny anecdotes from Michael Muhney and Percy Daggs III, find out that Emma Caulfield was obsessed with sleestacks, had an interesting conversation with Mark Sheppard, received hugs from Nicholas Brendon and was super excited when Jason Dohring recognized me from Melbourne. It was a good night as I’d made some new con friends and was looking forward to my convention weekend.

The first thing I did was line up for Orlando Blooms autograph. The security was quite strict compared to other guests. We weren’t allowed to have our bags with us as we approached the signing table and there was security everywhere. From 9-9.30am Orlando was supposed to be doing an extra signing for Platinum, Priority and Experience ticket holders. Apparently he ran into traffic and he didn’t show up until after 9.30am which was when his photo session was supposed to start!  LOL Orlando started to sign for a bit before doing his photo session. Fortunately, his line progressed really quick. They made sure no one took their time with Orlando; when it was my turn I got my LOTR boxset signed. He was quite friendly and nice and thanked me for coming. 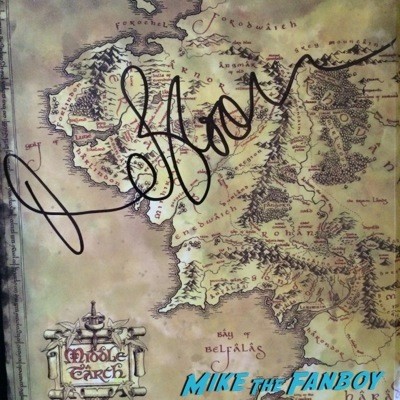 Once I was done I ran over to Jason Dohring’s photo session which was also at the same time as Orlando. Luckily it hadn’t started yet. I had brought some props in and got take a funny photo with Jason. 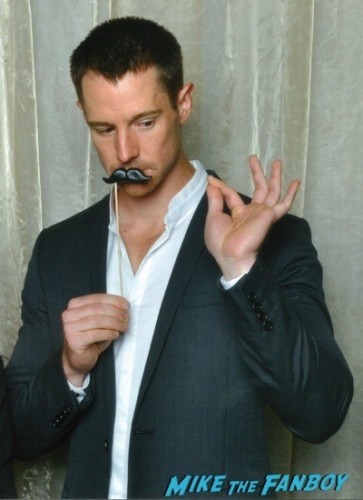 I then ran over to Orlando’s line which was moving quite quickly. It was pretty much in and out. He had security right behind him to make sure no one would take their time in the photos. Orlando was quite friendly and thanked me for coming out again.

My next photo session wasn’t for a while so I decided to head over to the autograph area. First up was Michael Muhney; I got Michael to sign my Veronica Mars sleeve which he wrote go see the Wizard. We touched on a conversation on the night before and then he gave me a hug and off I went. Next I went to see Percy Daggs III who I also got to sign my season 3 sleeve. Percy commented that I looked brighter today and then I explained that I had a long day from work the day before. 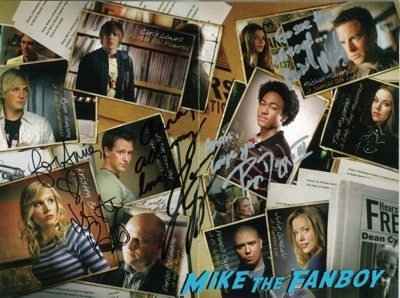 It was now time for the Veronica Mars group photo. I was greeted with hugs from Percy & Michael. Jason gave me a handshake haha I asked the guys if they could do a jumping shot with me. It took us 4 shots to get it there. The first one, we jumped to early. The second one Michael covered my face with his arm and then the third one Jason jumped to high and was cut out of the frame haha. Percy commented in the session how he wanted a copy of this photo too. I decided that I would reprint copies for each of them. I don’t usually post my picture but Michael Muhney tweeted this photo after I gave him a copy. 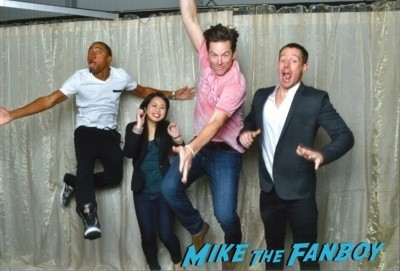 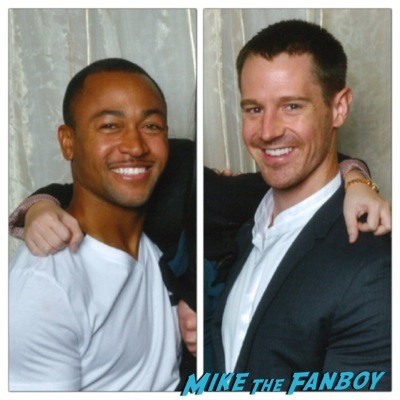 After all the group photos, I had my solo photos with Percy & Michael left. Both Percy and Michael again greeted me with a hug. 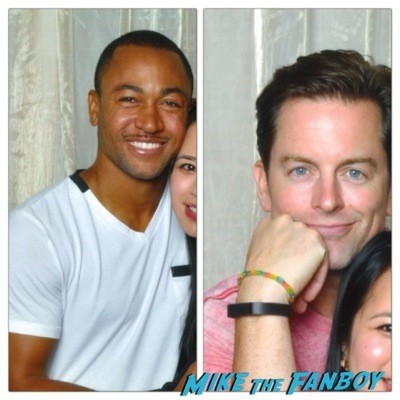 After my photos were done, I went off to see Jason’s Panel. There were a range of questions. One funny question was how did Neptune grand compare to his Sydney accommodation lol. 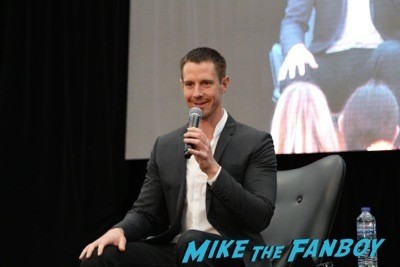 Percy & Michael’s panel was right after on the other side of the centre. I quickly ran over there and was able to get a seat in the front row. Their q&a was quite fun. Michael told everyone that he got taught that he could beat box by saying boots and cats really quickly on the microphone haha
  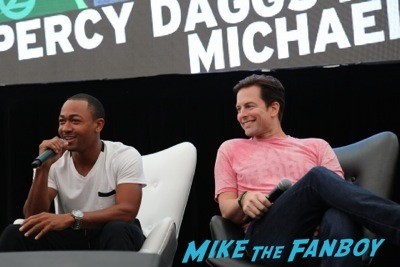 After I was done with the Veronica Mars guys, I headed back to the photo area. I had two more for the day – the Buffy Duo (Emma Caulfield & Nicholas Brendon) and Mark Sheppard. The Buffy duo photo was a bit rushed as they had a huge line! When I walked into the booth for Mark Sheppard, he recognized me from the night before and was happy to see me.
  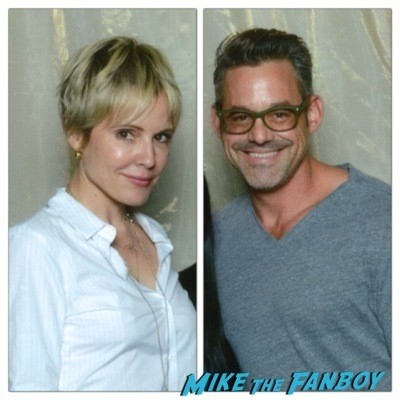 After that I headed to the Orlando Bloom panel and then oz comic con was over for the day. 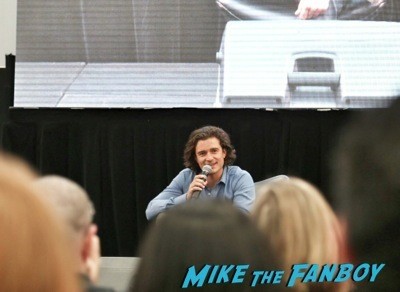 On Sunday, I attended half a day as I had to leave early to fly interstate. As I had so much fun with the Veronica Mars guys on the Saturday, I decided to get another set of photos with them again. Here is a collage of some of the photos I took on Sunday. 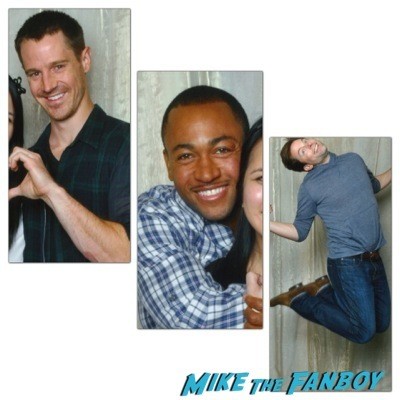 Overall I had an awesome weekend, especially meeting the Veronica Mars guys. They were friendly, fun and down to earth. This being Sydney’s first Oz Comic Con I was really happy with the event. It was a great venue although a bit hard to get to, wasn’t overly crazy to get around inside and a great line up. I’m looking forward to the next Oz Comic Con and really hope the Veronica Mars cast return.
I hope you enjoyed today’s recap and photos. Until next time,