I know you guys have heard me talk about the awesome new series on History Channel called Vikings. Let me just tell you, it’s awesome. Seriously awesome. Before I started watching the series, I admit I wasn’t sure how much I could get into a series based on Vikings, however once I previewed the first episode I was hooked!

Basically, think of Vikings as a less dense version of Game of Thrones. It has an amazing villain in the form of Gabriel Byrne, swords, epic battles, seriously for History Channel’s first scripted series ever, it’s pretty awesome what they have been able to accomplish.

AND… It’s been renewed for a second season already! I hate getting into a series and having the network pull the rug from under me, well no worries guys!

At Wondercon I had the opportunity to sit down with the cast of Vikings and talk to them about making the series, the audition process and more.

The first cast member I spoke to was the gorgeous Katheryn Winnick (Bones) who plays Lagertha Lothbrok.

Lagertha is the wife of Ragnar Lothbrok and their marriage is a love-match. She is a strong shield-maiden and warrior. She is independent and strong-willed both in protecting her family and accompanying her husband on some of his dangerous and daring raids.

Katheryn said that one of the things she loves most about Lagertha is that “she is so complex and has so many layers.” In fact she wrote creator Michael Hirst an email and asked to be continually challenged and find more meaty stuff. 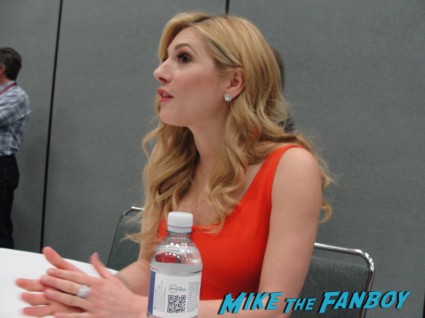 After she read the script for Vikings Katheryn knew she “wanted to get in on this” but no one was taking meetings. So she put herself on tape in her living room. She didn’t hear anything but was shooting in Toronto, her agent said, “You need to get more raw and wear less make-up or something to make sure you can pull of a viking.” Katheryn went to a costume store and rented what she thought was a “viking outfit” and went in with dirt in her hair. Three days later she was off to Ireland shooting. 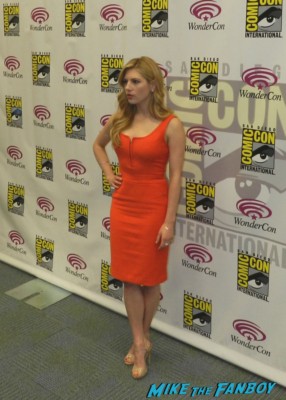 Receiving her first black belt at age 13 Katheryn is an accomplished martial artist but shockingly given that the series and the character of Lagertha in particular requires so much physicality the audition process didn’t.

In terms of shooting in Ireland, Katheryn said, being in the middle of Ireland you’re in an environment where things slow down and you have to relate to the other cast members.

“When you’re sitting in a tent, next to a heater, it forces everyone to tell stories and get to know each other. The Vikings are a community and that helped us become a family.” 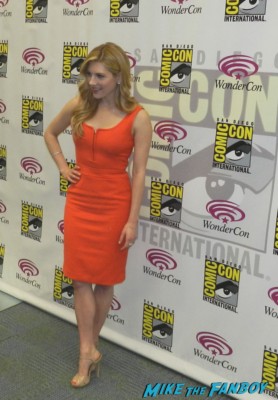 The Favorite thing about playing Lagertha, “I absolutely love the fact she was based and a real shield maiden and love understanding their belief culture and the fact that they are Pagans and how they dealt with their day to day lives.”

“Looking at other characters throughout history, I thought of Joan of ark and Catherine the Great when preparing for Lagertha, they were two people who were tested in a time when there were a lot of conflicts and it was hard to be a strong beautiful woman and how do you fit that mold. There’s a struggle to survive but also be independent.”

Next I chatted with George Blagden (Les Miserables) who plays Athelstan.

Athelstan is a young, innocent, Christian monk living in the remote monastery of Lindisfarne on the Northumbrian coast of England. For centuries nothing disturbed the peace and tranquility of the religious way of life there – until the Vikings came.

The first thing George talked about in terms of the series was that “the audience will learn a lot of new things about the Vikings through Athelstan’s eyes.” Sort of like, “the viewers” way of breaking into the Viking culture.” 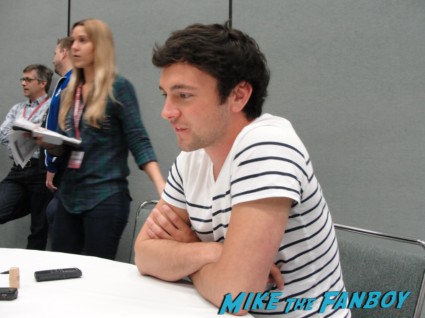 George said that he actually avoided a lot of the lectures about the Vikings when preparing for Athelstan. He’s a monk so everything about the viking culture is new to him as well as us. 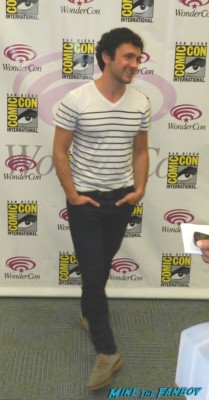 According to George one thing has been the most challenging aspect of the character, “I know it sounds silly, but it’s very challenging as an actor to be yourself. It sounds ridiculous, but before Vikings I was shooting Les Miserables and I was playing a character who was very much not me, he was a drunk womanizer who is confidant and loud, sometimes that’s a lot easier as an actor to do. When you turn up on set and the director says, we really want to see George as Athelstan just bring as much of yourself as possible, you kind of start analyzing yourself, what do you mean? What part of myself do you want me to bring? So that’s been really challenging.”

Best quote of the day, “Even the most religious of men are still human.” I might have to steal that line.

In the second episode Ragnar (Travis Fimmel) takes over the monastery where Athelstan lives. During that raid, Ragnar does not allow his brother or the other vikings to kill Athelstan. I asked George what he thought it was that made Ragnar not only stand up for him but be willing to fight for Athelstan’s life.

“Well, it’s a snap judgement and I think it’s because Athelstan speaks his language. He’s about to run him in with a sword and suddenly he’s presented with an Anglo-Saxon monk that communicates with him and that’s surprising to Ragnar. That’s certainly why he doesn’t kill him immediately and I think that the corks start turning in Ragnar’s brain. Maybe this man could be useful to him. Maybe I can gain something from this man. The more and more he learns about Athelstan on the boat and his own house, he realizes that it was a really clever move. Someone described it as a relationship of fate and I’m quite interested in that now. These two men are drawn to each other from different worlds.”

“There have been viking movies and such but on a scale like this on episodic television it’s never been done before, telling this story.”

And what does George want for his character? “I would love to be a warrior monk or side kick. Wield a sword or something. I’m not sure that’s what’s in mind. I hope I get to go back to Ireland for the next 10 years.”

Finally we got to speak with Ragnar Lothbrok himself, Mr. Travis Fimmel! 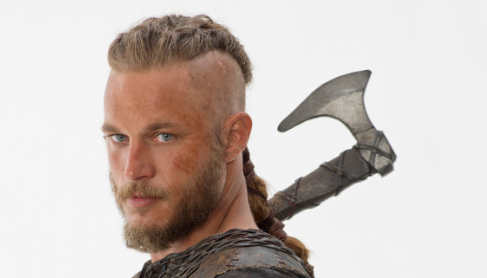 Based upon the real-life Viking leader who exploded out of Scandinavia and onto the world stage in the 8th century, Ragnar Lothbrok is a compelling, charismatic man who is always looking to break through barriers and discover new worlds to conquer. 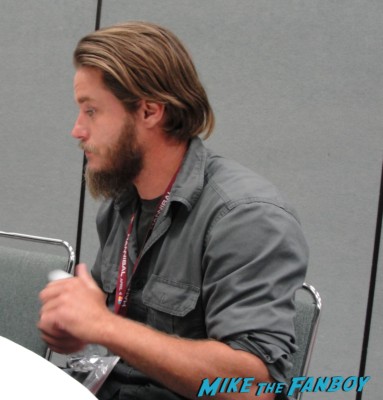 To prepare for the role, “I actually didn’t have a lot of time to prepare, but I was preparing for another martial art film so I was half way fit. I don’t have to remember the lines or anything. I tried to get them to do a pillaging bootcamp but they didn’t go for that.”

“I like the street smarts of Ragnar. If he wants to do something he’s going to do whatever he can to do it you know? Even though some people hinder his ideas sometimes.”

The most challenging thing about shooting Vikings? “The weather, I’ll say it every time, you know Ireland… It rained everyday. There wasn’t many good days and if it was a good day we were in the studio.” 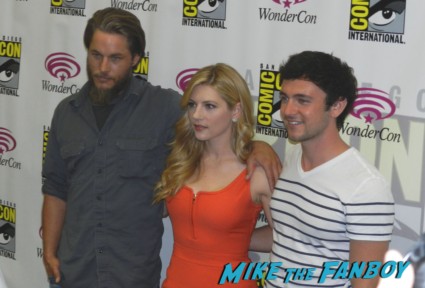 “You start to get used to it. We’re dressed for that weather. It’s funny those shows that have their shirts off all the time, you think Jesus these people weren’t real smart were they? But the costume designers and sets are amazing. You feel like you’re really in it.”

In terms of his relationship with his brother on the show, Travis said, “you love your brothers but they also piss you off. It’s like fighting with your brother as a kid. To be a good leader you have to show a bit of authority. It causes huge conflicts. My favorite shows are all coming up. The last episodes are the best.” 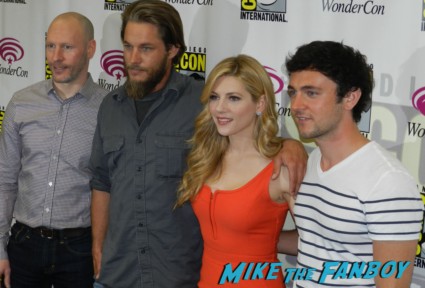 Travis said his favorite thing about the viking culture is “not using a knife or fork! I hate being serious.”

I asked Travis what it’s like working with Gabriel Byrne “Amazing! All actors want to work with great actors. He’s a legend and such a nice guy.”

In terms of the series going forward, “Ragnar is given no choice but to change. It’s never going to be enough for him. You make million and you want another. It’s that thing. Ragnar does really well for himself, but it’s still not enough. He has that thing in him. He wants prosperity and wants to be know. It’s never enough.” 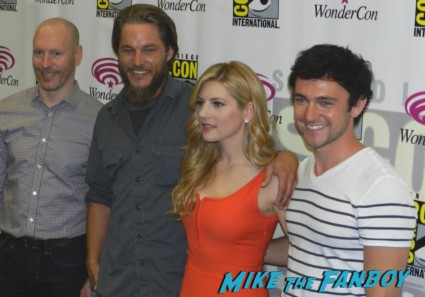 Guys, if you haven’t checked out Viking yet, don’t wait. It’s a great series that you’re going to love.
Vikings airs Sunday nights on History Channel!