If you have no idea about this show, there’s something seriously wrong with you. Honestly, I can’t imagine anyone hating this show. Get your butt over to Hulu and catch up now! But if you are part of the awesome fandom following Vikings, you already know about our feisty French Princess who single handedly brought hope to her people; the only royal who wasn’t afraid to go head to head with the Vikings. Princess Gisla’s character is played by our lovely Morgane Polanski, who embraces her fierceness and willfulness completely. 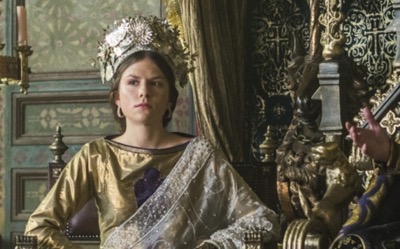 I’m excited to see how her character develops with Rollo this season. We’ve already had some good laughs, and I could only imagine what’s in store for us in the upcoming episodes. We got a chance to talk to Morgane last week, and here are some of the questions she was kind enough to answer. She couldn’t say much about the upcoming episodes for obvious reasons, but hope you guys enjoy some of the insight.

Your character is amazing and you are just on fire on screen. Especially the premier, but was it difficult for you to film your wedding scene? Was it hard to get yourself emotionally ramped up for that? 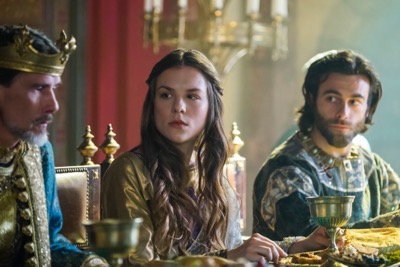 Without spoiling anything, can you tell us how your relationship will develop moving forward?

Gisla stood up to her father, I believe that Rollo is more of a challenge and it’s going to be exciting to see what happens.

Morgane Polanski: “Yes, he definitely will have to work hard I think with how stubborn she is.”

Can you talk a bit about the relationship between Rollo and the Princess – her going from being completely disgusted by him to accepting him or trusting him?

Morgane Polanski: “So, yes, in season three we sort of left it where her father after Gisla’s been defending Paris and basically saving her – doing what her father was supposed to do, he is behind it, accepted without even asking it to her for her to marry Rollo in order for him to defend Paris if his brother attacks. So I think for her like that was the biggest slap in the face, that was humiliating just because he even accepted without consenting of her or asking to her. So I think, yes, so that was her ego it seems is completely smashed.”

“So in season four, we pick up at this wedding which she doesn’t want to, but has to happen, and then they’re going to go on a journey from there. Stuff is going to change, twists and turns and ups and downs. And yes, there’s been really cool stuff to discover so I’m really excited for you guys to see it.” 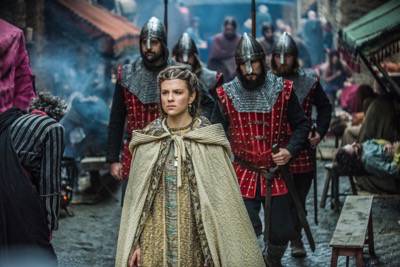 Do you have a favorite scene or episode so far?

Morgane Polanski: “The wedding scene was pretty epic to shoot just because like – first of all, I never went to a wedding so that was my first ever wedding. And like the veil, the whole thing, I mean, yes, that must be to look at. There’s some really amazing stuff I’ve shot after that, but that must have been – and especially the – I mean, I’ve never met anyone that will go in a wedding like sobbing, like they’re walking to the death chamber or something. Yes, that was pretty epic. That was my favorite I think.”

You had that wonderful speech last season rallying the troops. Tell us about playing a strong female character in this series where historically was not really a world friendly to women, or to strong women.

Morgane Polanski: “Well, I mean, I think with Michael Hirst, we’re pretty lucky to have – he likes to write for strong female characters. And I mean, it’s so exciting for me as an actor because although you think you have the fairy tale of the princess she is, she basically does the job her dad is supposed to do and it’s so brave and ballsy and will not – she has so much it seems and she’s so humble that she just won’t allow people to walk on her, yet she has to be the face of the people.”

“Especially this season, my character goes through such a journey and going from adult to a woman and taking a completely different direction and it’s just so interesting as an actor to have that sort of material to bite on and especially as a woman. Yes, it’s really exciting.” 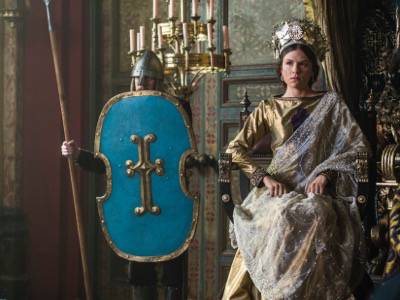 Rollo doesn’t know much about the political maneuverings within the French court but Gisla probably does, so will she steer Rollo in the right direction?

Morgane Polanski: “Yes. Behind every strong man stands a stronger woman. So I think she’s smart and she knows if she doesn’t contradict for her father, she’ll do it through Rollo.”

So you think she’ll be the one pulling the strings? 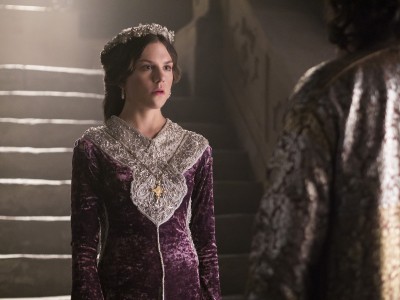 Did you feel any extra pressure playing this historical French figure from maybe your French history teachers in the past? Did you say, “I want to make sure I do everything right by them,”?

Morgane Polanski: “Of course, the pressure is definitely not from my French history teachers. No, obviously it’s always pressure playing someone that existed, but I think there’s so little on that time and I think Michael really appreciates like him giving up us the script and us taking the freedom to just do it as we would do it. At first I really, you know, but then I took ownership of it and, yes; there’s so much you can do, you know?”

Can you talk a bit about how you’re shooting your scenes? Are you guys shooting kind of apart from the rest of the cast and how is it working with Clive Standen?

Morgane Polanski: “It’s not that the shoot apart, it’s just a lot is on location and a lot is in the studio in Ireland. So the studio where France is, is not in the same set of Vikings so I get to see them a lot but not just work with them a lot. And working with Clive is absolutely amazing. He is so easy to work with, we get along really well. He’s a very good friend and it’s very easy. Yes, really, really cool.”

I love that Rollo has finally met his match. Your character has been quite disgusted with him, but I was wondering if her feelings will change when he does turn his back on the Vikings or does she think that he has other motives other than trying to win her over?

Morgane Polanski: “I definitely think he will have to work – I mean, always inside her there will be that, “Does he really mean it? Will he turn on me?” It’s not even to trust the blood. So I think that always will be, but I think he will have to, depending on his actions and how hard he works and how much he proves, I think she’ll, you know. You sometimes you try to fight it but you just allow the benefit I think.” 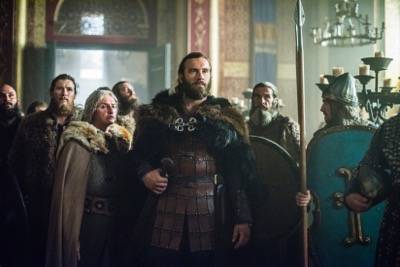 Are we going to see your character become a little more vulnerable than we’ve ever seen her in season four?

Morgane Polanski: “Well, she’s going to put the guards down a little bit. Or, well, it’s just that you will get to see her – as you just think about it in season three you mainly see her in public or rarely see her in an intimate space or somewhere where people aren’t looking, so you will get to definitely see her surrendering.”

I know you were talking earlier about strong female characters and one of the things I do really love about this show is how strong all the women are, but one of the things that we’ve really seen in the past three seasons is that most of the strong female characters are the Vikings and they’re really strong physically and are fighting and things like that. And one of the things I love about your character is that although she doesn’t fight, she’s really strong mentally, she’s intelligent and she – while she can’t fight, she uses her intelligence and her will in ways that we really haven’t seen on the show in a lot of other ways and I think she uses her will in ways that Siggy did in a lot of ways and I think that – can you talk about kind of her intelligence and the way she’s going to use that going forward, and maybe if Rollo’s going to kind of see little bits of Siggy? Because she kind of reminds me, she has glimmers of Siggy in her intelligence and things like that going forward and just kind of the contrast of her strength compared to the Viking women.

Morgane Polanski: “Yes, I definitely think she’s – yes, you said it brilliantly. I think she is as strong as the Vikings but in a completely different way. I think that’s what Michael tried to represent with the difference of culture of the Vikings culture and of the French culture and actually she I think a lot of the times she just – I think the main thing with Vikings is they are as they come. I think the French have – what he tries to is there’s much more layers, there’s much more I think agendas and look over your shoulder. And I think she just adores how straightforward Rollo is, or they are, and I think she is just careful that he – she just teach him the different rules. Yes, the rules are sort of different I think in France and I think she just got used to that, and is very witty and she just knows how to take people. Like she just even with her dad and him and stuff, she just knows how to work around it.” 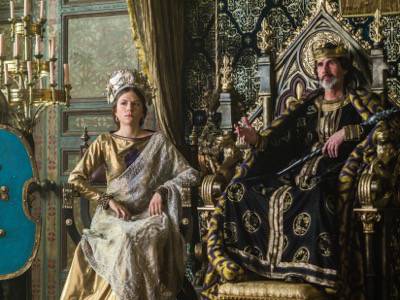 Morgane Polanski: “He can lead because she can play the card. Well, yes, but I just think in every – opposites attract and I think that’s what’s so brilliant when you’re opposite someone that’s so different than you. I think if you’re both open to just learning, you can both take from each other and just sort of meet in the middle. Yes.”

What has your experience been like working on Vikings, just the whole experience of it and what do you like about it and what have you learned from it?

Morgane Polanski: “I mean, it’s been an amazing experience. It’s been so good to be just able – I think you only get to do this on the TV shows, to just have the same character go through so much different emotional journeys. So that’s been amazing, and as a character, to go from a girl to a woman and to just explore the different aspects of her and like not in public spaces and to just see how she would be behind closed doors.”

“What I’ve learned is I mean working, it’s just I’ve learned is it’s just very quick how you work for TV. So, it’s been the best training and just to have amazing costumes and those sets and Ireland is the most – I mean, I’ve never been to Ireland before and I had the most amazing time there and everyone works so hard and they’re on it, so it’s really been lovely. Really, really been lovely.”

A huge thanks to Morgane Polanski for taking the time out of her busy schedule to talk to us. Don’t forget to catch new episodes of Vikings Thursday nights 10/9c on the History channel.