Can I tell you how much I love this story!

MTF Reader and Orphan Black fan, Jeri had an amazing moment meeting Tatiana Maslany. Now, as you’ve probably read here on MTF Orphan Black is a huge favorite of ours, so reading Jeri’s encounter with Tatiana Maslany brought such a huge smile to my face!

Jeri was in NY and… I’ll let you read Jeri’s recap for the full story. It’s so adorable!

When I heard Tatiana Maslany of ORPHAN BLACK was going to be a guest on LIVE WITH KELLY & MICHAEL, I knew I had to take a day off from work to see if I could meet her and hopefully snag an autograph!

So, when the day came, I went to wait outside of the studio for her by the stage door and a garage. I got there at 6:45 am. I waited for a very long time before anyone else showed up. Finally, two people came about 8am to wait for her also. They were seasoned autograph seekers, and they told me that getting autographs at KELLY & MICHAEL was hit and miss. They said that most guests pulled into the garage at the studio, and that security would then shut the garage door before the guests got out of their black SUVs. (Incidentally, Jane Fonda was also a guest that day,along with Derek Hough). I didn’t know all of that, and my hopes were nearly crushed. I was so afraid that would happen here.

There was also no need to get there so early. Most people who came showed up around 8:30. Hey, you live and learn! All in all, around 25-30 people came to wait for Tatiana. Security by that time had placed us behind a barrier, but after that disappeared completely. One by one, the guests arrived, along with the hosts in their SUVs, and one by one into the garage they went, not stopping to acknowledge the people waiting outside. No Tatiana this time. Jane Fonda seemed to have ducked in her SUV so no one would see her. (This was the conclusion by process of elimination after seeing everyone else arrive. There was one mysterious, Empty SUV with no one in the back seat)! I guess Fonda ducked because she thought we were waiting for her….

We waited and waited. Around 10am, the guests and the hosts started leaving, one by one. All had left, including a ducking Jane Fonda as, we had seen that mysterious empty SUV again.

Finally, Tatiana left. A photographer showed us a picture she had just taken of Tatiana getting into her SUV. Off she went, no stopping for autographs. After the crowd realized that she had already left, there was a lot of disappointment from all of us.

But….suddenly someone screamed, “OMG HERE SHE COMES”. Sure enough, there she was, RUNNING toward us from the street corner. She said that she had told her driver to pull over so she could come greet her fans. 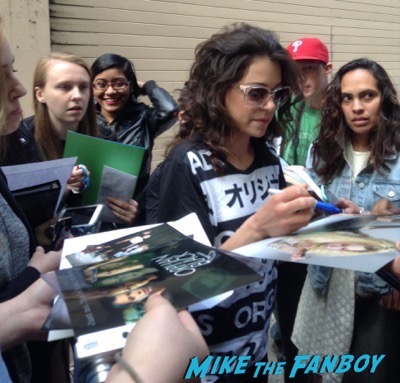 She started signing autographs and posing for pictures. Tatiana finally got to me, said she loved the Orphan Black shirt I was wearing. 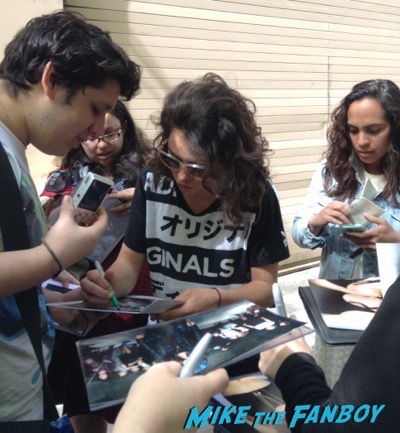 She signed for me, and took a picture. In my whole autograph chasing life, I have NEVER met someone who was so nice and so accommodating and who ran toward her fans. 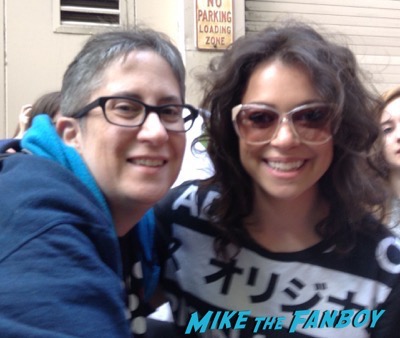 Most of the time they run away like bats out of hell. Tatiana signed for every single person there, and took countless photos with us. I don’t know if she signed or posed for photos for her appearance later that day on THE LATE SHOW with SETH MYERS. I didn’t see anything posted on Instagram or Twitter. I think that I must have struck gold that day. All in all, the best autographing experience of my entire life. 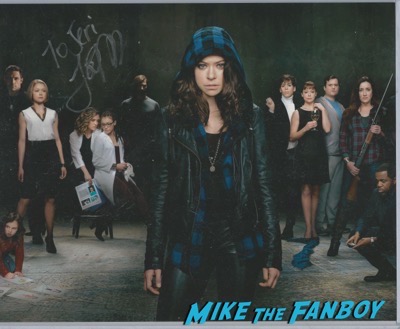