There are very few sequels that are considered better or at least as good as their predecessors. One can probably count the number on one hand in fact, The Godfather Part 2, Aliens, Star Trek II: The Wrath Of Khan… They are few and far between. One of those films is of course Terminator 2: Judgement Day. The James Cameron classic has not only stood the test of time but it has become one of the pillars of science fiction films and one that other films of the genre are measured by. 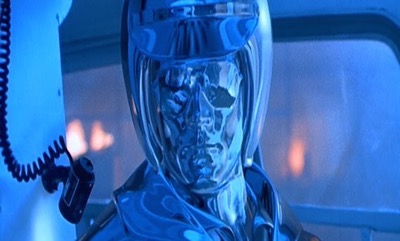 Terminator 2: Judgment Day, has been re-released on 4K UHD Blu-ray and let me tell you, not only does it hold up, but the picture quality is stunning. By now, every one knows the plot of the film. Arnold Schwarzenegger is a robot from the future who was the same killing machine from the first Terminator film, now reprogrammed to protect John Connor (Edward Furlong). This young boy is destined to become the head of the resistance and without The Terminator’s protection he’ll be killed thanks to Cyberdyne, the artificial intelligence who has taken control of the world in the future.

Sarah Connor (Linda Hamilton) is John’s mother and has been through this all before in the first film. She’s a hardened leader waiting for the apocalypse but soon realizes she must team up with the Terminator to save her son and destroy the pieces left behind in the past that will eventually cause the creation of Cyberdyne. 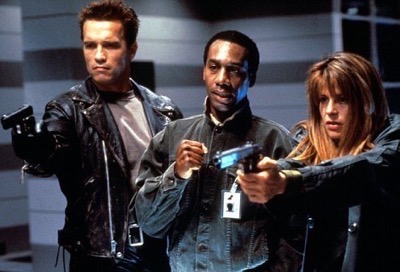 Hot on their tail is the T-1000 a liquid metal terminator that is light years ahead of the original Terminator. He’s almost impossible to defeat and can impersonate people, knows everything including flying helicopters, driving forklifts and is relentless in his pursuit of John Connor.

Terminator is in a lot of ways a product of its time, a contrast between the 1980s consumerism and the dark bleak landscape that awaits. The way everyone lived in excess in the 1980s which of course gave way to grunge and future that wasn’t bathed in neon. Looking at it now, it’s even more striking. 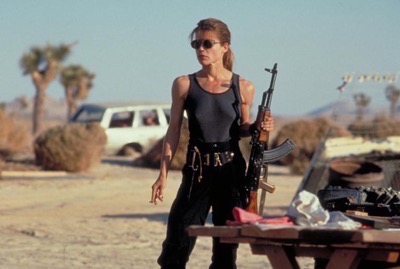 The special effects, which of course were ground breaking at the time not only hold up but are still quite remarkable. It’s been some time since I re-watched Terminator 2: Judgement Day but I have to tell you, the film is still as amazing as it was back when I first saw it. What really makes the film is the relationships between the characters, this is where so many action films fail, they don’t build up the relationships or create characters we care about. 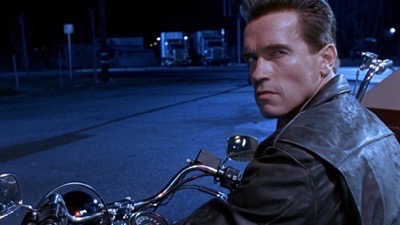 Terminator 2: Judgement Day arrives on 4K UHD and it’s not a moment too soon. The Sci-Fi epic has been screaming for a high definition release for a long time and this one does not disappoint. James Cameron supervised this re-release which means there was attention to detail. It’s more than a step up from the latest blu-ray release, the brightness levels provide the picture with a rich and deep contrasting picture. It’s a stunning upgrade.

The fine details are also excellent and the action sequences look better than they have in ages. One can see the individual stitching on Arnold’s leather jacket and each pore and skin feature is noticeable here. It’s a bit shocking to see a film you’ve grown up with and finding new and different things thanks to a new transfer. I have to say it was stunning.

Reprogramming – This is a brand new documentary that’s about an hour long. It’s awesome and shockingly fairly candid. It talks about the films legacy and has cast and crew interviews as well.

The regular Blu-ray disc is included as well.

There are deleted scenes and a trailer.

Overall, I think anyone in your life would love this set, if they’re an action fan, a sci-fi fan, this film really is as close to perfection as one can get. I’m happy that the film has finally gotten the high definition transfer it deserves. I wish the 3D version was also included but apparently it’s only available on the UK release. With that aside, the release is a great present for the holidays and it comes Highly Recommended!