It’s all hallow’s eve! All the ghoulish and devilish delights today are beyond words!

So, for today’s Cult Classic Corner, Jack is talking about The Texas Chainsaw Massacre! One of the scariest films ever for sure! Doh!

Sorry boys and girls for missing my deadline this past week with cult classic corner.  I completely spaced on my article and only remembered while heading out for a date so please accept my humblest apology. Hopefully this week’s column makes up for it.

Halloween is a great time of year, but an even cooler theme when it comes to collecting autographs- horror/Halloween related autographs. Growing up I always wished to meet Freddy Krueger, “Jason,” and even Michael Myers because I was extremely fascinated with horror icons. Fortunately for me I have met Robert Englund, the entire run of actors who’ve portrayed Jason Voorhees and one of the actors noted for playing Michael Meyers.

These characters have become cultural phenomenons and even casual film fans will instantly recognize their names. If you started humming or singing one of their themes, fantastic! When you start listing directors associated with these characters like Sean Cunningham, Wes Craven, John Carpentar, etc. its hard to imagine a world without these iconic film figures, but there was a time before any of these characters even existed and even had a chance at being successful. It all stems from the father of slasher films, Tobe Hooper. 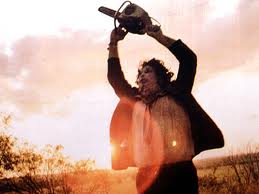 In 1974, Tobe Hooper directed the landmark horror film “The Texas Chainsaw Massacre,” which not only helped define, but also spawned the slasher genre with an incredible movie based (or rather inspired) on a “True Story” (Ed Gein’s murders). For nearly 40 years, this cult favorite forever remains an essential horror film with its memorable and iconic villain, “Leatherface.” Thanks to its immensely successful premise of a masked, psycho killing people with a weapon, “The Texas Chainsaw Massacre” redefined and expanded the horror genre.

This frightening franchise consisting of seven films saw some scary incarnations, reboots and even a 3D release, but one thing still remains: the horrifying image of “Leatherface “ wielding his chainsaw.” For those unfamiliar with the first film or just merely know the remake, the film tells the story of several friends traveling through Texas looking to check the gravesites of some dead relatives. Apparently there has been some grave robbing, but just to be safe they decide to check things out. Along the way, this group comes across a disturbed hitchhiker and inevitable stumble across a cannibalistic homestead comprised of Leatherface’s disturbed family. 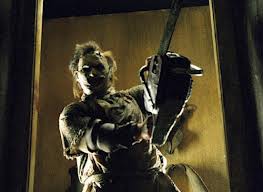 Even now this film holds up extremely well and as far as remakes go, “The Texas Chainsaw Massacre” (2003) is probably the greatest horror remake ever besides “The Fly” and “House of Wax” (1953). From beginning to end, if you aren’t a little shocked by this film there’s definitely something wrong with you.

Over the years I have been extremely fortunate to meet many of the awesome people associated with the film. Sadly I have never met any of the actors, who have portrayed “Leatherface.” Still, I have met several of the main leads and the killer co-creator and director of the original, Tobe Hooper, whom I met at the infamous Weekend of Horrors at Fangoria. Tobe was scheduled to do a signing, but took off immediately in his car. Weirdly enough, Tobe not only rolled down his limo to sign autographs, but also took his time signing autographs one by one as though he was doing a signing line from his car. After alerting one of my new friends inside, I managed to receive two autographs, including one on my original DVD (which was $30- full retail price and on the original out of print Pioneer DVD). 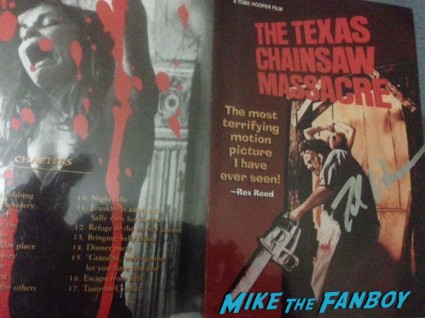 Later on I met Bill Moseley, who played “Chop-Top” in the sequel and is hands down one of the coolest character actors around in the horror business. Super chill with fans and loves to discuss his career very openly. I have met Bill probably about six times now and actually had the pleasure of working with him before. During one of my visits I managed to get my “Texas Chainsaw Massacre 2” DVD signed by him and have to say, sure he might be Otis B. Driftwood, but he will always be “Chop Top” first. (By the way, he also makes an appearance in the recent 3D release for the latest installment). 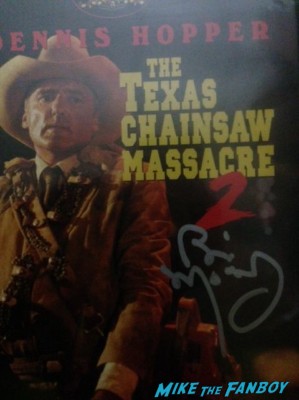 Although not the lead and more known for his work with George Romero, Ken Foree was the co-lead in “Texas Chainsaw Massacre 3” with Mr. Viggo Mortenson (Yes, the LOTR guy!).  Ken is very egotistical and rarely signs autographs for free. I only have him on “Dawn of the Dead” and “Devil’s Rejects” stuff, but its still pretty cool to have met a horror legend like him. 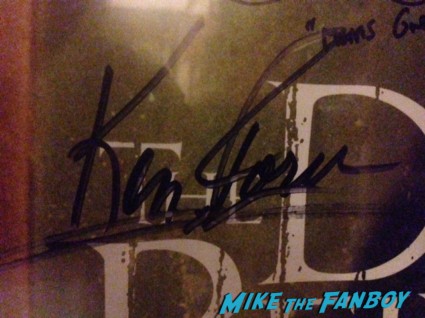 Last, but finally not least is Jessica Biel. Growing up I casually watched “7th Heaven” but never considered myself a “fan” except for Beverly Mitchell and Jessica Biel (On a side note, Catherine Hicks who played their mom on the show, she is Andy’s mom in the first Child’s Play!) So when the remake “Texas Chainsaw Massacre” came out I was super stoked to see it. My best friend’s dad took us to see it and we all loved the film immensely. Even now when I recently watched the film, it still holds up and maintains that really dark atmosphere of the first. After the premiere of the film “The Love Guru,” (Yes I had tickets for the premiere”) I managed to get Jessica Biel to sign my ticket and as they say, the rest is history. 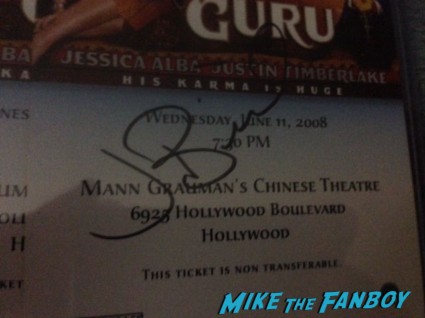