Home / Fanboying! • Horror / The ABC’s Of Horror And Sci-Fi! DVD Dave Counts Down His Favorite Spooky Films And Meeting The Stars! Alien! The Abyss! And More!

DVD Dave is back. I know wait… Catch your breathe… Now that your settled, we can continue.

It’s October, and that means it’s time for the spooky, the slimy, the spacey, the gory, and gross! It’s horror and sci-fi month!

To commemorate the month of October, DVD Dave is counting down the ABC’s of Horror and Sci-Fi and sharing some of the cool DVD’s he’s gotten signed and the awesome experiences.

I know what you’re thinking… What happens when we get to letter “X!” Oh yeah…

Check out “A” below!

It’s been some time since I posted an article (blame Fanboy for not giving me a column!),

(Editor’s Note: Sure, Sure blame the editor! nice! M-)

but I figured that with Halloween around the corner what better time to share some of my signed DVDs in the science fiction/ horror / superhero genre?  Be forewarned this is not meant to be a “greatest movies of all time” list.  This is just my top picks (usually 10) for each given letter.  Some MAY be cheesy so bear with me.  With that said, on to letter A!

1.  ABRAHAM LINCOLN VAMPIRE HUNTER:  Since I warned you about the cheesy aspect I have no qualms sharing “Abraham Lincoln Vampire Hunter”.  Mike and Scottie better not make any smarmy comments because I know THEY got their stuff signed by Benjamin Walker too!  To be honest, I enjoyed the film.  It was better than I expected (low expectation) and it was great to meet Mr. Walker and realize he is SUPER fan friendly. 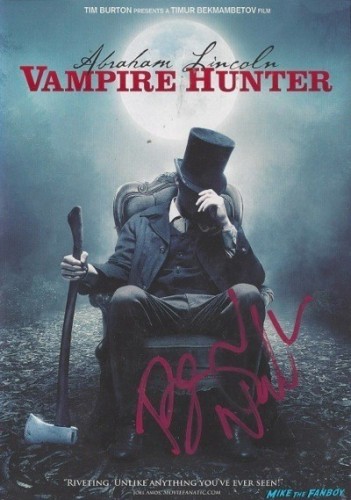 2.  THE ABYSS:  Sure when people think of James Cameron they start saying how great “Avatar” is, the effects were groundbreaking, blah,blah,blah.  I prefer “The Abyss”.  The storyline was intense and the effects still are as amazing now as they were 25 years ago (YES, a quarter of a century ago!)  I had Cameron sign the cover as well as actors Ed Harris and Michael Biehn.  Would love to add Mary Elizabeth Mastriantonio to this but I have never had the chance to meet her!  Some day… 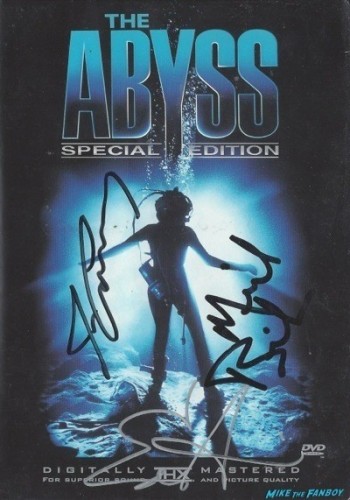 3.  ALIEN:  I loved this movie when it first came out in theatres and it is still one of my favorites.  I was lucky enough to have director Dan O’Bannon sign the booklet for the Quadrilogy before his untimely death.  On the other insert, I have Sigourney Weaver, Tom Skerritt, Harry Dean Stanton, Yaphet Kotto, and Veronica Cartwright. 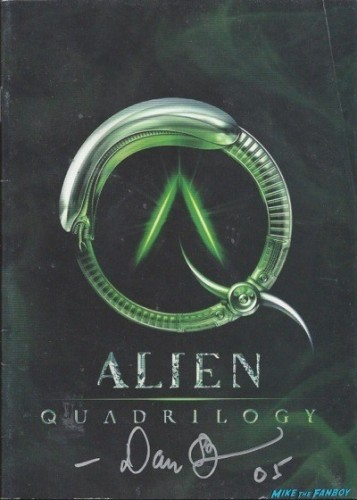 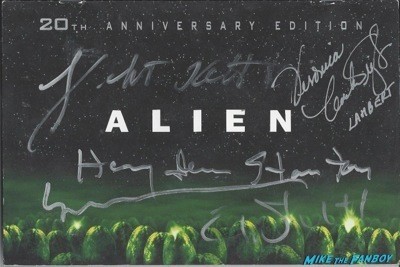 4.  ALIENS:  What could possibly follow “Alien”?  “Aliens” of course!  No sequel slump here.  “Aliens” is even considered by many to be a superior film over its predecessor.  This insert is signed by Bill Paxton, Lance Henriksen, Jenette Goldstein (you’ll see more from this trio in letter N installment), as well as Michael Biehn, Paul Reiser, Mark Rolston, and Ricco Ross. 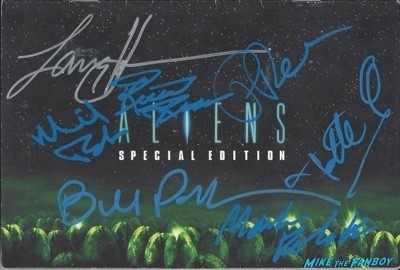 5.  ALLIGATOR:  Okay I can feel Mike itching to take a swing at me for this, but they can’t ALL be blockbusters!  This is a fun movie and actor Robert Forster is always great to his fans. 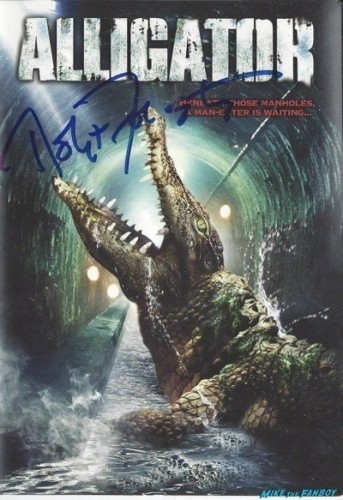 6.  AN AMERICAN WEREWOLF IN LONDON:  This is probably my favorite in the A category.  John Landis hit it out of the ballpark with more than a little help from FX guru Rick Baker.  Landis and Griffin Dunne signed this at an event at Virgin Megastore (remember that place?  R.I.P.)  I sent this to a friend in London who was able to get Jenny Agutter to add her autograph.  It was also signed by Baker and star David (“I’m a Pepper”) Naughton.  Who else to this day can’t hear Creedence Clearwater Revival’s “Bad Moon Rising” without thinking back to that amazing Baker transformation?  Love it!!! 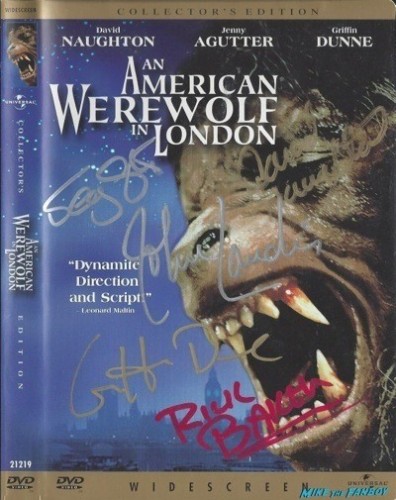 7.  AN AMERICAN WEREWOLF:  Eh, okay this not so much.  Still, both stars Tom Everett Scott and Julie Delpy both signed so it is complete IMHO. 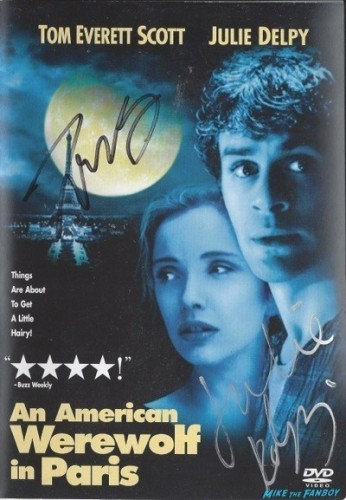 8.  AMITYVILLE II: THE POSSESSION:  I have to admit this one scared me more than the first film.  Plus having hottie Diane Franklin in it didn’t hurt either!  Franklin signed my cover as well as Burt Young and Rutanya Alda. 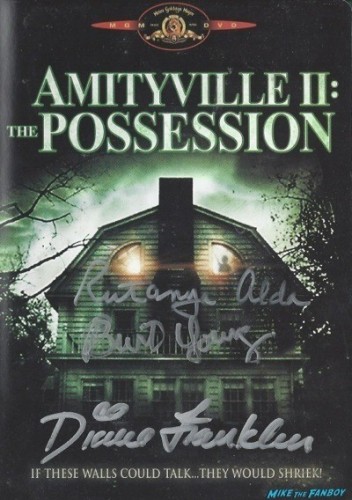 9.  APRIL FOOL’S DAY: I was not one of those people who enjoyed this movie when it first came out.  As a horror starved teen in the 80’s this left me pissed.  Won’t spoil it for those who haven’t seen it but…yeh.  The cast on the other hand is fantastic.  Amy Steel and Deborah Foreman are favorites and loves meeting fans at conventions across the country.  It was also signed by composer Charles Bernstein and actors Clayton Rohner, Ken Olandt and Tom (I’m not Biff) Wilson.  Tom does a lot of stand up comedy and if you get a chance to see him you should but be aware that he does NOT sign “Back to the Future” memorabilia.  Don’t bother.  Nice guy other than that. 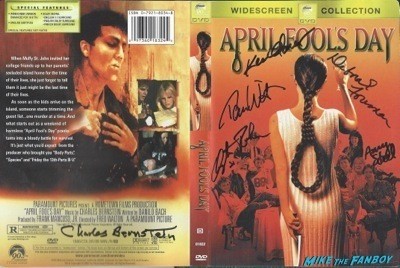 10.  ARMY OF DARKNESS:  This is where Bruce Campbell became a breakout star.  He hasd previously starred in “Evil Dead” and a few other lesser genre entries, but this film really kicked ass.  Bruce signed it as well as director/writer Sam Raimi, make up artist Greg (“Walking Dead”) Nicotero, and actors Patricia Tallman, Ian Abercrombie, Bill Moseley, Bridget Fonda, and Richard Grove.  Heads up:  If you ever get chance to meet Danny Elfman at an event you might wanna bring something for his wife to sign… Bridget Fonda. 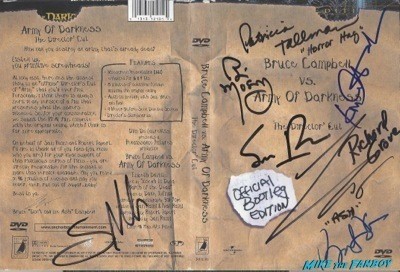 Well that wraps up letter A.  I hope you enjoyed sneaking a peek at some of my pieces.  If so, stay tuned for B coming at ya soon!