Welcome back to my DVD Dungeon!  This time for the ABCs of Horror Sci-Fi I will cover the letter E and you’re gonna have to endure some not so hot choices because…well let’s face it.  There aren’t a lot of great horror sci-fi flicks that start with the letter E.  So hang in here because you’ll enjoy F.  Let’s get going!

1.  EVIL DEAD II:  Great follow-up to the original.  Despite having a decidedly more comedic slant, this entry cemented Bruce Campbell’s status as a horror icon.  Unfortunately, the DVD does not have a lot of graphs but the ones on it are pretty cool:  Bruce “Don’t Call Me Ash” Campbell, director Sam Raimi, and animator Tom Sullivan. 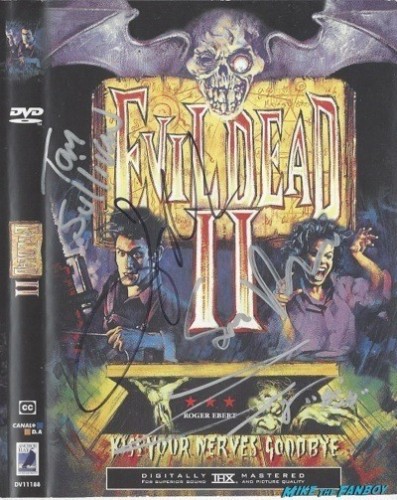 2.  ED GEIN:  I love films based on real life killers.  Mark Harmon I need you to sign my copy of “Deliberate Stranger”!  Ed Gein is pretty much the granddaddy of modern day serial killers.  For those not in the know, Ed Gein was the inspiration for films ranging from Norman Bates in “Psycho” and Leatherface in “The Texas Chain Saw Massacre” to Buffalo Bill in “Silence of the Lambs” and even Bloody Face in season 2 of “American Horror Story”.  Two films were direct dramatizations of his life story.  He was portrayed by Steve Railsback in 2000’s “Ed Gein” (a.k.a. “In the Light of the Moon”) and by Kane Hodder in 2007’s “Ed Gein: The Butcher of Plainfield”.  In picking one I had to go with the Railsback version.  Sorry Kane!  But in pictures I’ve seen of Gein he doesn’t seem as humongous and life-threatening as you.  Railsback does a fine job of showing how you never know what goes on with even the most timid and seemingly passive of people.  You just never know! 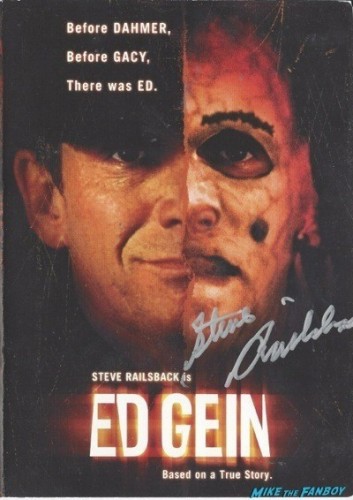 3.  EXCISION:  I love when a film has a fresh new idea for a story.  “Excision” definitely has that.  Definitely not a happy ending kind of film here folks!  It is signed by John Waters, Traci Lords and Modern Family’s Ariel Winter. 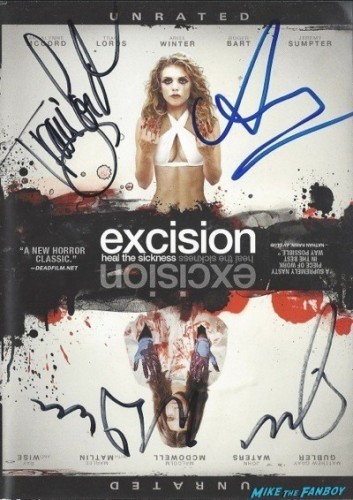 4.  THE EYE:  Yes I prefer the original but since I have never met the cast or crew of the 2002 Hong Kong original I will share the remake signed by Jessica Alba.  Alba is great about signing, so if you hear that she will be making an appearance make plans to go see her! 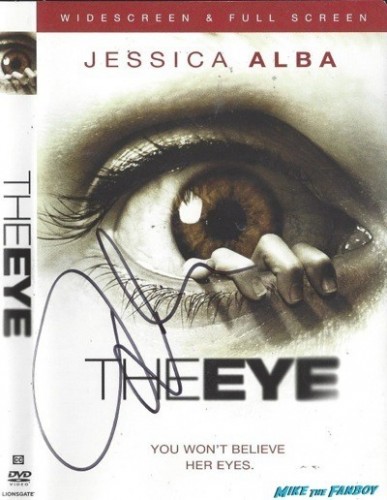 5.  THE EXORCISM OF EMILY ROSE:  Got Jennifer Carpenter at a panel for “Dexter”.  She was excited to see the DVD and even inscribed “1 2 3 4 5 6 1”.  Jennifer is really cool with her fans and always signs whenever possible.  I can’t tell you how disappointed I was with how Dexter ended its run.  Debra (Jennifer’s character) deserved better IMHO.  Oh yeah, the DVD was also signed by composer Christopher Young. 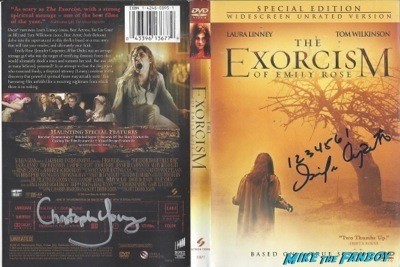 6.  EIGHT LEGGED FREAKS:  This was a fun edge of your seat horror film.  It features David Arquette and Kari Wuhrer.  Kari was none too pleased when she saw David had signed over her image on the cover.  So she decided to return the favor and signed over his face!  The film also features a young Scarlett Johansson who I have never been able to get an autograph from!  Some day… 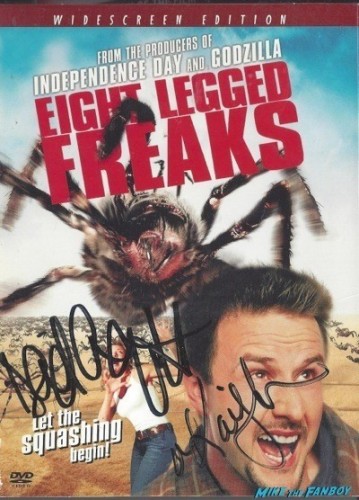 7.  ESCAPE FROM NEW YORK:  Great entry by John Carpenter.  Can’t say I was thrilled with its sequel, but this one was one heck of a ride when it was released.  It’s been signed by Carpenter, Ernest Borgnine, Harry Dean Stanton, Adrienne Barbeau, and Charles Cyphers. 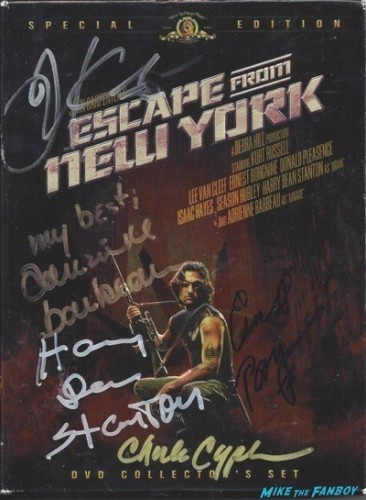 8.  EATEN ALIVE:  Great flick by the creator of “The Texas Chain Saw Massacre”.  It features Robert Englund seven years before he donned the razored gloves of Freddy Krueger.  When I got him to sign he had been bombarded by fans trying to get him to sign NOEM posters and figures, etc.  He had stated he was done signing but when he saw “Eaten Alive” he smiled and quoted his classic line to me, “Name’s Buck and I’m rarin’ to f*ck!”.  He was happy to sign it.  Remember it helps sometimes to take something out of the ordinary to get signed!   Also on the DVD are director Tobe Hooper, Marilyn Burns (R.I.P.) and Kyle Richards (pre Housewife of Beverly Hills).  Englund is always kind to his fans and makes sure they leave happy.  Linda Blair on the other hand… 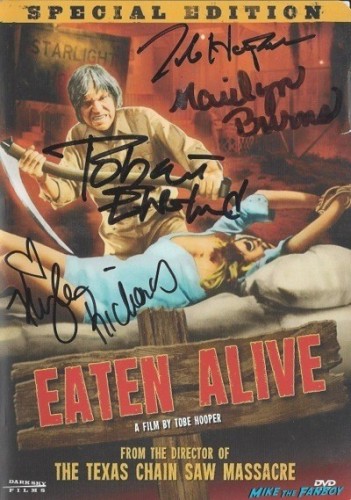 9.  THE EXORCIST:  By anyone else’s standards, this film SHOULD be my top pick for letter E.  Friedkin is always nice as long as you don’t swamp him with memorabilia and make it obvious you are gonna turn around and sell it as soon as you walk away.  Ellen Burstyn was very kind to sign the cover for me at a rare book signing appearance.  Eileen Dietz signed it was well.  The reason I can’t make it my top choice is because of it’s main star, Linda Blair.  It’s always disappointing when you meet a celebrity whose work you’ve enjoyed over the years and, upon meeting them in person, you realize what an ass they are.  Now I am not saying that paying for her graph is a bad thing.  I think donating your money raised from signing is very noble.  However, her demeanor is very rude.  When fans meet you they want to walk away with an enjoyable memory.  It is not just a business transaction Ms. Blair. 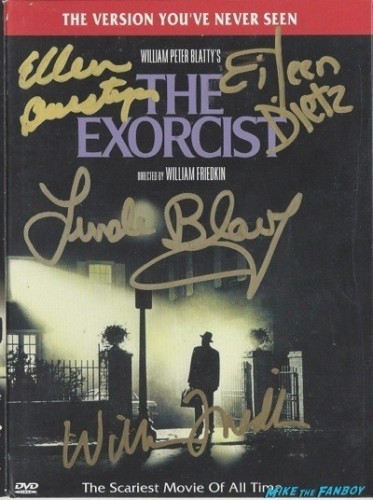 10.  THE EVIL DEAD:  Sure Evil Dead II was great, but I still prefer the original.  Great make up and FX made this film a must see even when banned in the UK as a “nasty”.  Raimi signed it for me at a Q&A for one of his Spider-Man films.  Nice tro see he dragged Bruce in for cameos in the trilogy!  It is signed by Raimi and Campbell, as well as Betsy Baker, Ellen Sandweiss, Sarah York, Hal Delrich, and Tom Sullivan.  The cast still does many conventions across the U.S. so get  out there and say hi! 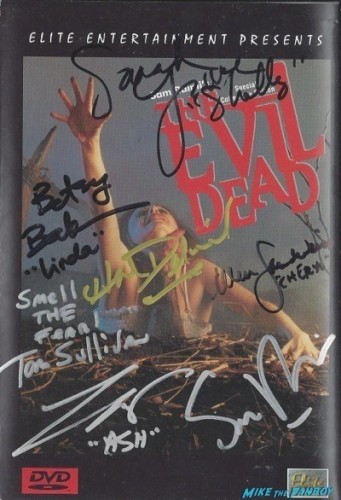 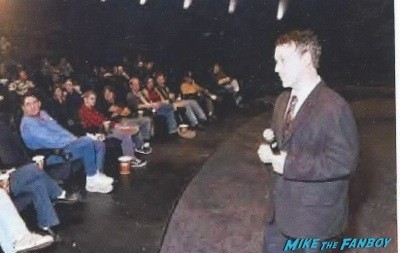