Home / Fanboying! • Horror / The ABC’s Of Sci-Fi Horror! “I” Invaders From Mars! It’s Alive! ID4! Interview With A Vampire! And More!

Welcome to letter I of signed Sci-Fi Horror DVDs!  Let’s get right into it shall we?

1.  INVADERS FROM MARS:  Not very many opportunities to get movies from the 50’s signed.  Most cast and crew are either retired from public appearances or have passed away.  Luckily Jimmy Hunt has made a couple of appearances recently and I was able to have him sign the DVD sleeve. 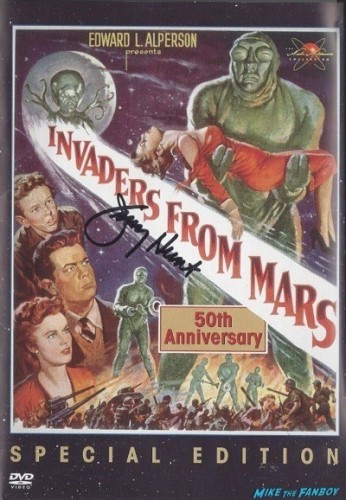 2.  I DRINK YOUR BLOOD:  Got this signed at a Monsterpalooza convention here in California years ago.  It was signed by director David Durstona and actress Lynne Lowry. 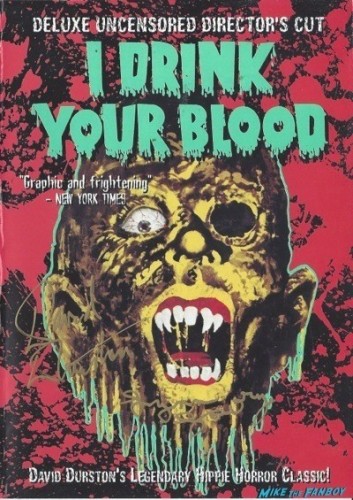 3.  INNOCENT BLOOD:  Great John Landis film.  Not as well known as “American Werewolf in London” but definitely worth checking out!   It has been signed by John Landis and Robert Loggia. 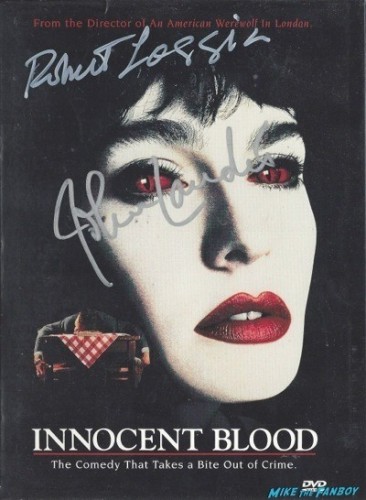 4.  IT’S ALIVE TRIPLE FEATURE: Pretty trippy film series brought to the screen by Larry Cohen.  It has been signed by Cohen, make up artist Rick Baker and SHaron Farrell from part 1 and Gerrit Graham from part 3. 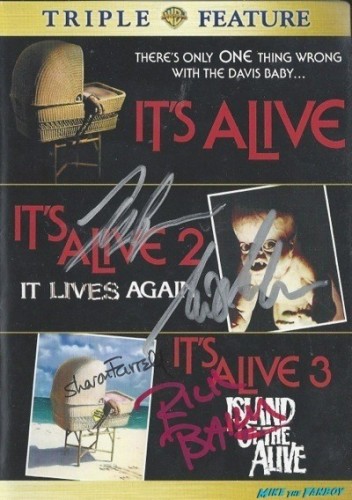 5.  I SPIT ON YOUR GRAVE (1978 and 2010):  The original was considered controversial for its day and it is a good film but I enjoyed the remake much more. Whichever you prefer, I have presented both here for your viewing enjoyment.  Original was signed by Camille Keaton and director Meir Zarchi.  The remake was by Meir again as well as the new director Steven R. Mujnroe, Sarah Butler, Jeff Branson, Daniel Franzese, Rodney Eastman, Chad Lindberg, Lisa Hansen and Saxon Sharbino.  All signatures except for Camille and Saxon were obtained at a special DVD release signing for the remake. 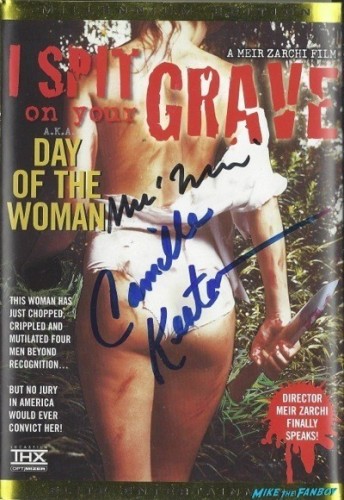 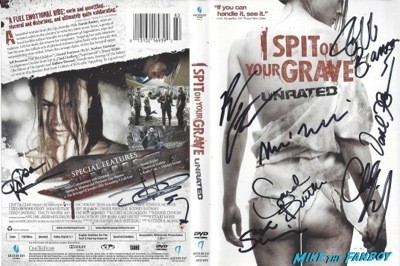 6.  INSIDIOUS:  The signatures on this DVD also come from a special DVD release signing in California.  Ty Simpkins, Lin Shaye, Philip Freedman, Joseph Bishara signed at that event.  Patrick Wilson signed at the premiere for “The Conjuring”. 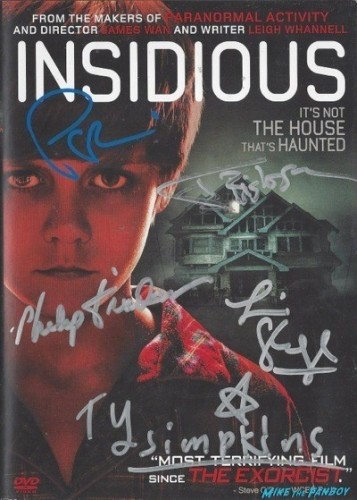 7.  INTERVIEW WITH A VAMPIRE:  Star-studded adaptation of the Anne Rice novel.  It was signed by director Neil Jordan when he was promoting a book he had written.  It has also been signed by actors Christian Slater and Tom Cruise.  Say what you will about Tom, there is no denying that he is very generous with his fans.  This picture shows Tom not only signing “IWAV” for me but 3 others as well!  Tom is a fan-pleaser whether it is signing autographs, taking selfies or even talking to your family on your cell phone!  Yes, I saw him do it! 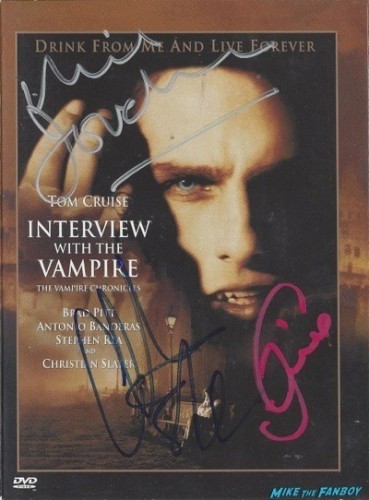 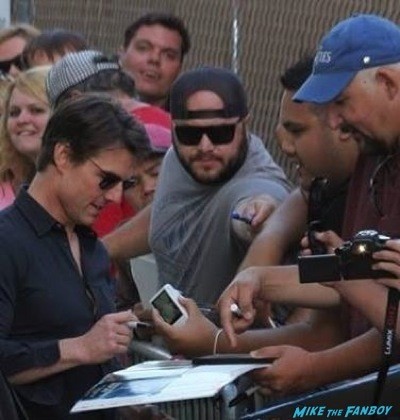 8.  INDEPENDENCE DAY:  The front cover was way too glossy for signatures so I opted to have cast sign the insert.  Not a lot of space but you do what you can!  It is signed by Bill Pullman, Giuseppe Andrews, Adam Baldwin, Vivica A. Fox, Mary McDonnell, Brent Spiner, James Duval, Robert Loggia, and Jeff Goldblum.  Wil Smith is very fan friendly too but I wonder if I’d be able to have him sign with the right pen in the right spot…it’s tricky! 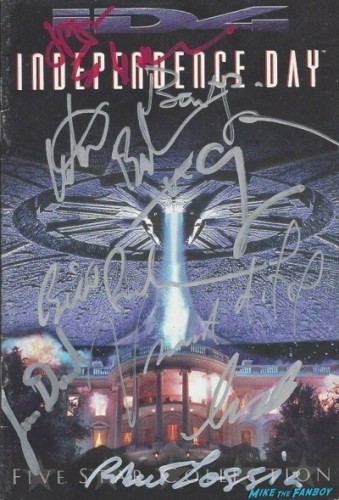 9.  INVASION OF THE BODY SNATCHERS:  Depending on when you were growing up you might be familiar with different versions of this film.  Kids growing up in the 50’s had the Kevin McCarthy version.  Kids recently had the Nicole Kidman / Daniel Craig version entitled simply “The Invasion”.  But for me, it was the 1978 version that is near and dear to my heart.  Who could ever forget that cute little doggy with a homeless man’s face?  The Kevin McCarthy cameo?  Or Donald Sutherland’s twisted screechy scowl at the end of the film?  Love it! Love it!  LOVE IT!!!  The cover has been signed by the main 4 actors:  Donald Sutherland, Brooke Adams, Jeff Goldblum, and Veronica Cartwright.  If I ever get the opportunity to add Nimoy I will but I can’t see myself paying big bucks to add him.  If I only end up with the 4 I have I’m satisfied. 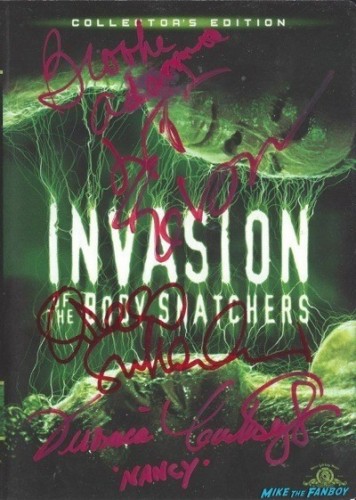 10.  My top pick for the letter I is the Stephen King mini-series “It”.  To be precise, part one is my top pick.  Part One scared the heck out of me and Part Two left me feeling cheated.  A cockroach with a hypnotic ray…really?!?   Anyway, I suggest seeing Part One and skipping Part Two.  It has been signed by director Tommy Lee Wallace, Seth Green, Olivia Hussey, Annette O’Toole, Tim Reid, Harry ANderson, Dennis Christopher and Pennywise himself, Tim Curry. 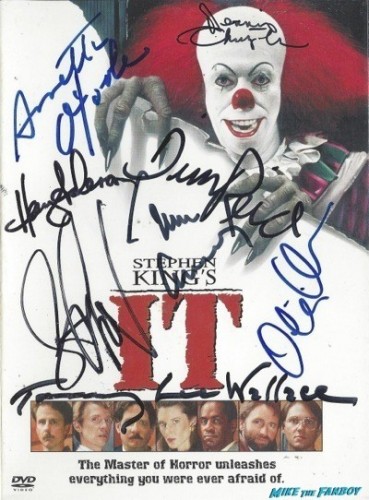 See you next time for some more autograph delights!  By the way congrats to Mike for spotting the mistake on my Friday the 13th Part 2 insert.  Kevin Bacon indeed signed it and I was hoping he was featured in a campfire flashback but to my chagrin he wasn’t.  Oh well!  So Mike hit up Fanboy and he’ll get me your mailing info for the signed DVD of “You’re Next”!  Thanks for participating!!!