MTF Reader Chris hit the Berlin premiere of The Amazing Spider-Man 2! You might remember Chris from his awesome recap from the Berlin Divergent premiere!

This time Chris was able to meet Andrew Garfield, Jamie Foxx, and the stunning Emma Stone! Not a bad day right?

Check out his full recap below! Rock on brother!

On tuesday I attended the German premiere of “The Amazing Spider-Man 2: Rise of Electro” in Berlin and had a quite good time, so I thought maybe someone is interested in hearing a short report about it.

Andrew Garfield, Emma Stone, Jamie Foxx, Dane DeHaan, director Marc Webb and producer Matt Tolmach were going to attend, so I was really excited as a big fan of especially Emma and Dane, but also Andrew.

Shortly before the premiere started, our barriers got moved again and suddenly I worried that my spot at the carpet probably might not be the best… but since I heard that for example Emma is great when it comes to signing autographs, I still hoped that maybe at least she would get down to where I was.

Andrew Garfield was the first one to arrive. He started signing across from me, slowly going down the line. I hoped he would have enough time and sign long enough to get to us.

Now producer Matt Tolmach arrived and started signing close to me! He moved quite slowly and for a short moment it looked like he might just stop signing before he gets to me. But I got his autograph and talked to him shortly; he was really nice. 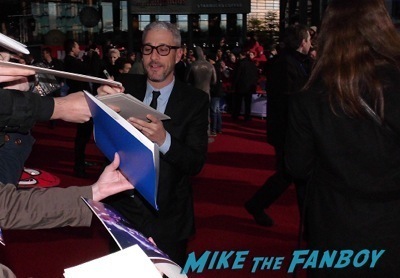 Emma Stone arrived and started signing on the other side of the carpet, just like Andrew.

Director Marc Webb arrived and signed a few, but never got close to where I was standing.

Dane DeHaan was the next one to arrive. As first he signed across from us as well. After signing there for a while, he came over to our side and started signing like 5-6 people down from where I was standing… but moved into the opposite direction. He seemed nice though, signed stuff nicely and posed for many pictures with fans. 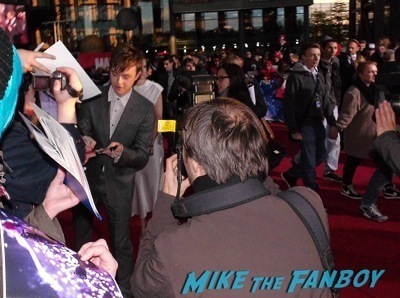 Andrew now signed on my side of the carpet, moving into my direction. He didn’t stop for pictures with fans, but really tried to sign for everyone. I got his autograph; it’s not his best signature, but I’m still glad I got him. 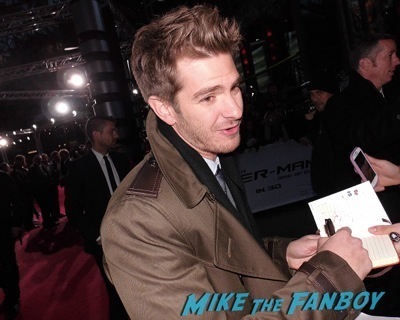 After a while, I could finally see the beautiful Emma Stone getting closer. She was soo nice, was worried about fans because of the pushing and tried to sign something for everyone. She signed one photo for me and then I asked her for a picture. She immediately agreed and posed for a picture with me which turned out nicely. That was a nice surprise, I didn’t really expect that she would stop for pictures. 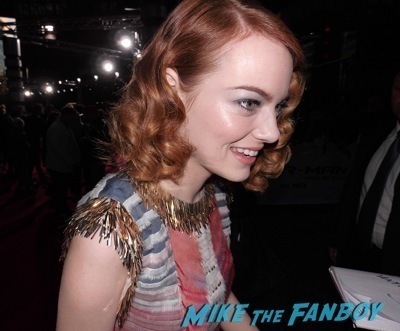 Emma continued to sign for a bit and after she signed basically everywhere, she went to the press area.

Jamie and Dane were still signing somewhere, so I hoped to maybe still get Dane, my hopes that I would get Jamie weren’t too high.

But then suddenly I saw Jamie Foxx signing close to me. He skipped persons to my left, signed my photo, skipped the person to my right and continued signing for a short while. Wow, that was a lot of luck. 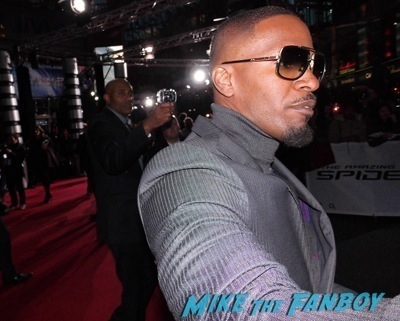 Dane was the last one who was still signing somewhere. When we saw him walking towards the press area, we tried to get his attention and it looked like he wanted to come over, but wasn’t allowed to. Which was understandable because it was already quite late. Still, I really hoped to meet him…

But in conclusion, the premiere was really successful for me.