The Scarlet Starlet is back kids! Yay! I’m really excited that she took time out to share her experiences at the UK premiere of The Avengers! And on the Eve of it’s release here in States!

It always amazes me how different things are in the UK than here in the States. In the UK Chris Hemsworth walks out with fire and flames, here they just out of the car, lol… So much less dramatic!

Without further delay check out the Scarlet Starlet’s recap of the Avengers UK premiere after the jump!

O my life – the day is finally here! It’s the UK premiere of Avengers Assemble! I can’t wait to see this film! I love Marvel, I love Joss Whedon’s scriptwriting, and I love Robert Downey Jr! I’m sure this is going to be a big event, so I’m off out early. I get myself up to the venue for 9.30am, and good grief the barriers are ALREADY full, two deep in some places! Nothing is due to start until 5.30pm. After some wandering round, I find myself a spot on the second row, fortunately right by the side of the stage. 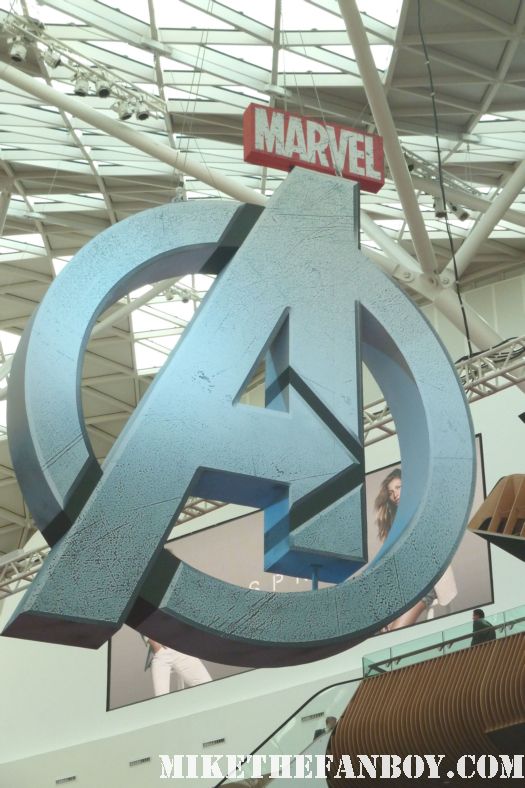 In honesty, I think I’ve really lucked out with this spot. I’m so near all the activity I must be successful… I know I shouldn’t tempt fate, but I’m the most confident I’ve ever been that I’m in a good spot…!

The day is long, but I have friends nearby so all is good. 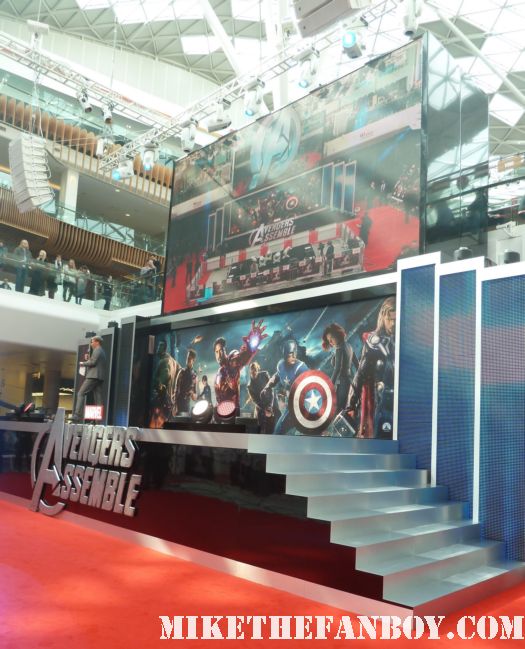 For some reason a panic sets in around 1pm, and everyone in our section stands up. It’s about 3pm when the adrenaline kicks in and we start getting really excited. In the meantime it’s been getting busier – we’re at least 5 deep in our section, and frankly it looks busier in the bigger section on the other side! A lot of costumes about – apparently Marvel are running a costume competition with tickets to the premiere for the winners.

Have I mentioned that the trailer has been on repeat on the big screens ALL DAY! I think I may now actually be able to recite it. In my sleep. Is it me, or would this have been the perfect opportunity to screen the films in order? :0) 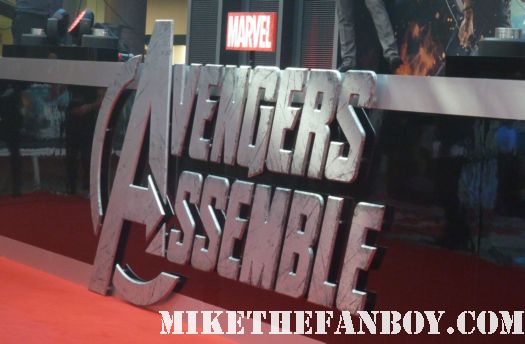 Come 5pm there is lots of build-up from the stage; costume competition winners are invited up for interviews… we’re treated to practice questions from the host to a rather self-conscious looking lady who has to pretend to be most of the guests. Finally, it’s around 6pm, and the action is starting!

Chris Hemsworth is the first to arrive – stepping out on stage to a blast of flames and a thunderous applause! 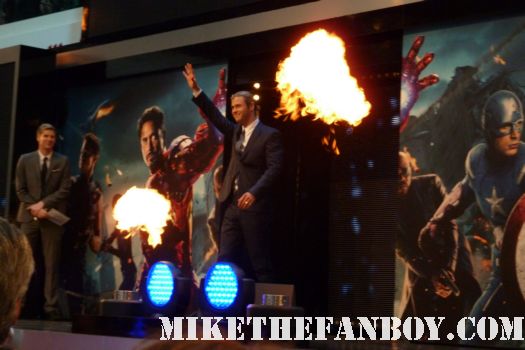 He is accompanied by his wife, who is heavily pregnant. A quick interview, and he then descends the stairs on our side of the stage… we call… and wait – what’s going on? He’s being led away from us, to a brace of photographers who are standing on the carpet in front of the stage (when did that happen? There is a photographer’s pen which is populated; how come there are photographers on the carpet too?) 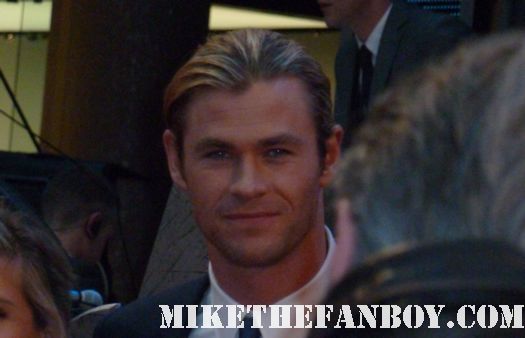 Tom Hiddleston is next to come out. He has a quick interview, 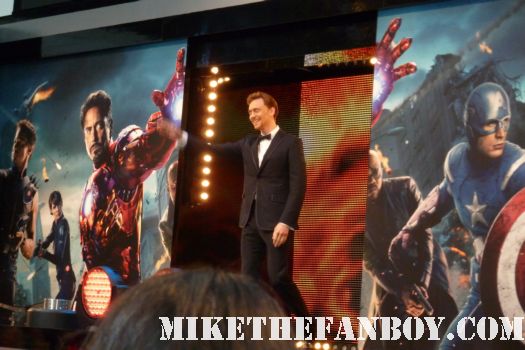 then descends the steps on our side – and it happens again!!!!! O my life! This is looking so bad! I know my luck can’t hold out forever, but for it to fail at the Avengers premiere is truly tragic! 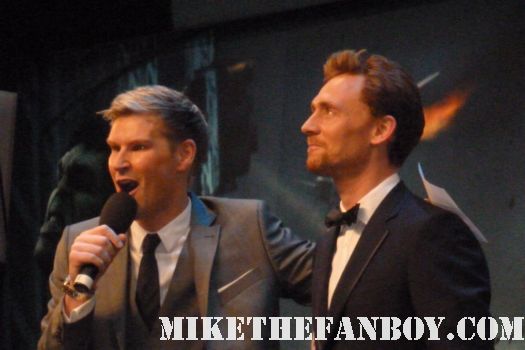 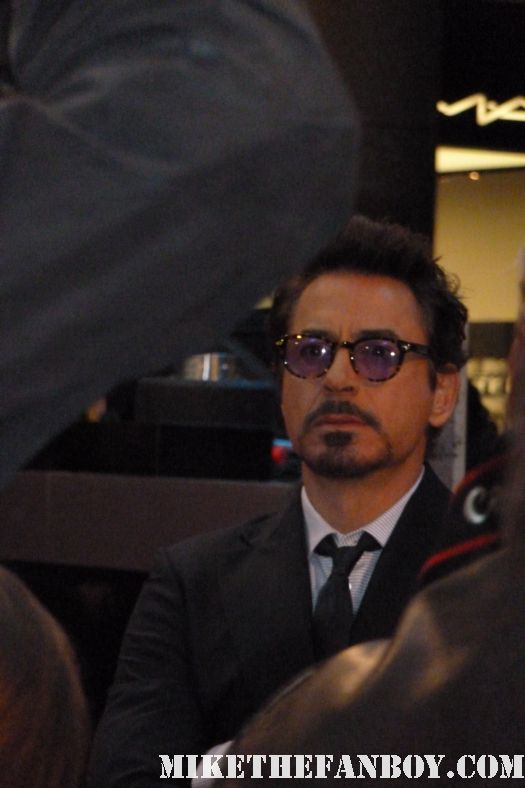 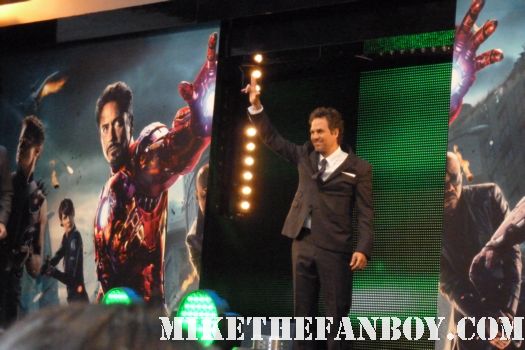 Clark Gregg is also whisked away, 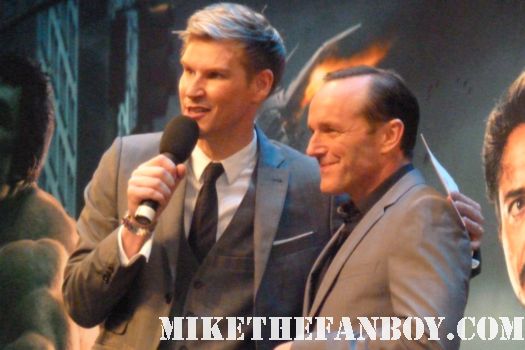 as is Jeremy Renner, 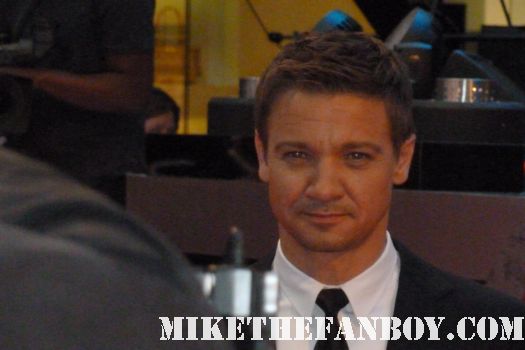 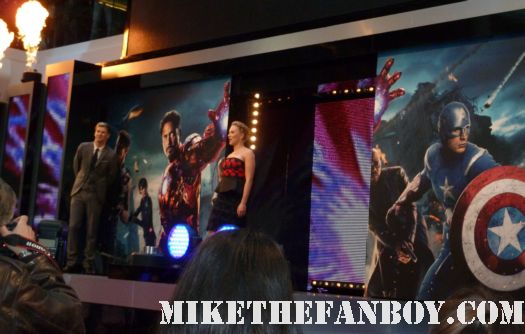 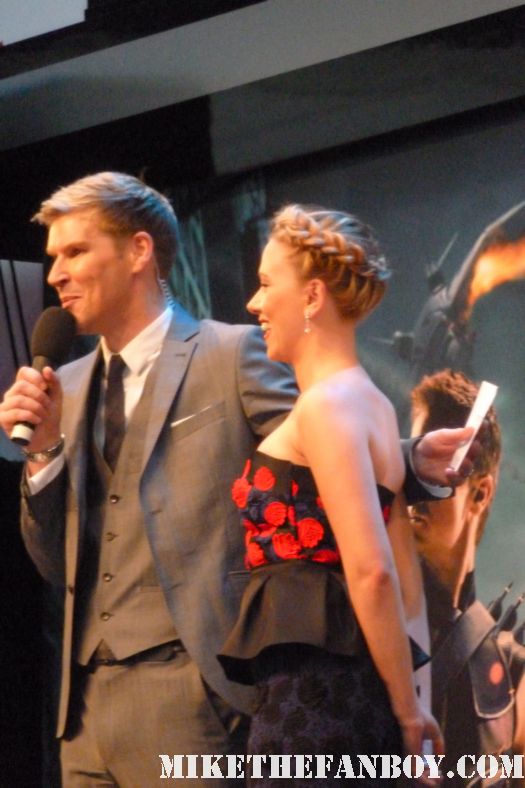 and Cobie Smulders, one after the other. 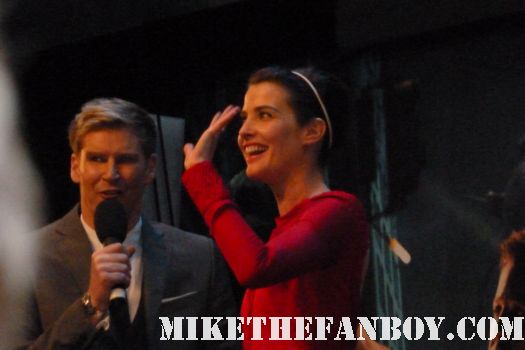 Hot damn! – I could actually go away autograph-less from this event!

By this time Chris Hemsworth is doing interviews at the sizeable bank of media pens on an island in the middle of the carpet, and Tom Hiddleston joins him. We’re watching helplessly from the wrong side of the barriers – everyone is signing up an absolute storm! It looks like all the guests are doing pretty much the full length of the barriers – on the other side. When Chris and Tom get close (and finish their interviews) we call for them, they motion to say they have to go the other way for more interviews, but will come back.

It must be gone 7, the film is due to start at 7.30, and I have not a single autograph yet! Mark Ruffalo is coming close, down the media pens, he reaches the end – and God bless that man! He’s coming over! Sharpie in hand! Yeeeesssss!!! Thank you, Mr. Ruffalo! We salute you, sir!!! 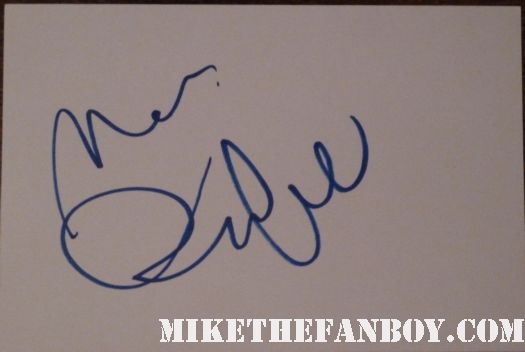 TV personality Jonathan Ross is taking to the stage and is doing a second round of interview with the guests. We can’t really tell who is going where on the carpet, but many of the guests seem to be doing interviews at the media island. 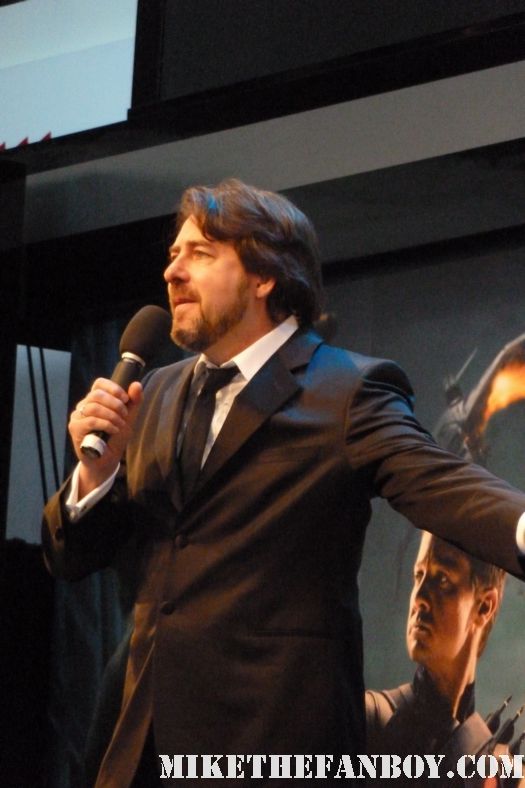 Jonathan Ross has interviewed Kevin Fliege, and it looks like some of the guests are making their way to the stage for more interviews. 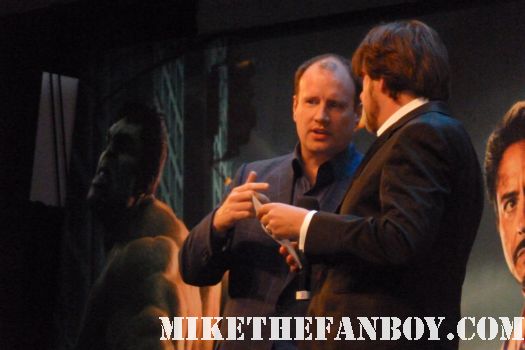 I’m watching Robert Downey Jr who is now doing the interviews on the side of the media island opposite us. As soon as he finishes, I start calling. He does a bit of a dance past us and disappears back towards the stage. 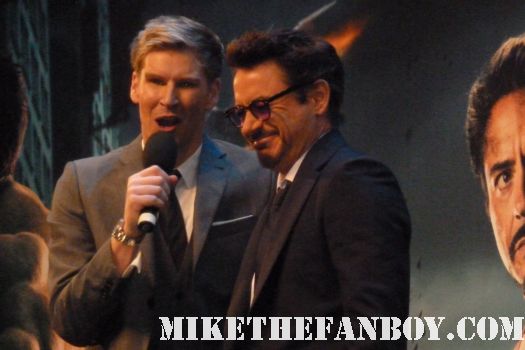 It’s starting to happen on our side of the carpet! Tom Hiddleston comes and signs for us! Awesomeness! He does the whole line – and he really has a strong fan contingent who are out in force today! 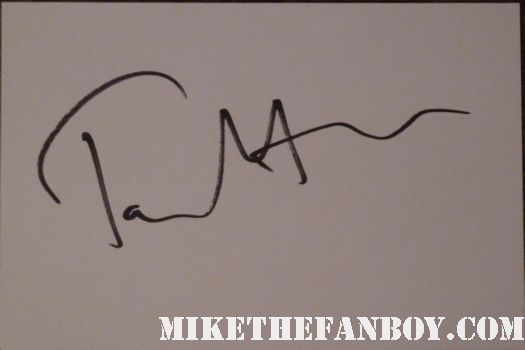 Chris Hemsworth is coming past too! Yay! I get an auto from him on a Thor photo. 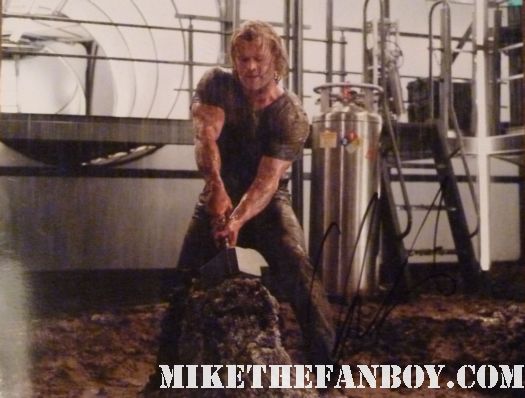 Scarlett Johansson is coming down the line as well, and is also signing up a storm! Fantastic-ness!!! 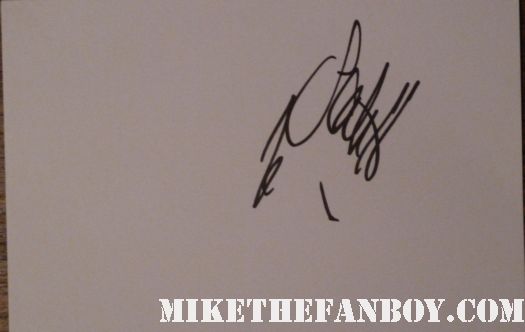 Robert Downey Jr and Jeremy Renner are being interviewed on the stage – they are an absolute riot. 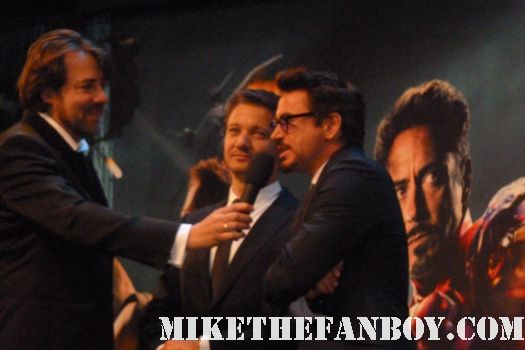 Robert Downey Jr is so funny – the same dry sense of humor he gave us in the Iron Man films; Jeremy Renner seems to be playing along as well, although RDJ is doing most of the talking. 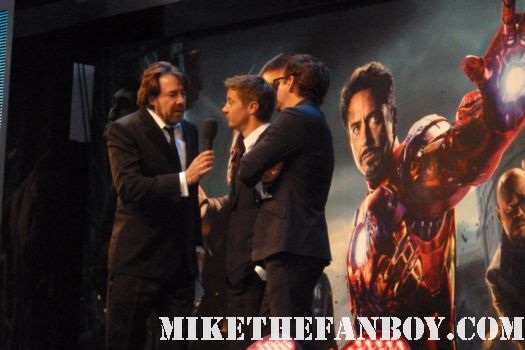 Clark Gregg is waiting near the stage; I think he knows he’s going to be called up soon. He signs for people closer to the stage steps, but stops and moves away. He’s not called to the stage yet, about 4 of us start calling for him; he can hear us but hasn’t spotted us yet… no wait! He’s coming over, and signs for us as well – just in time! 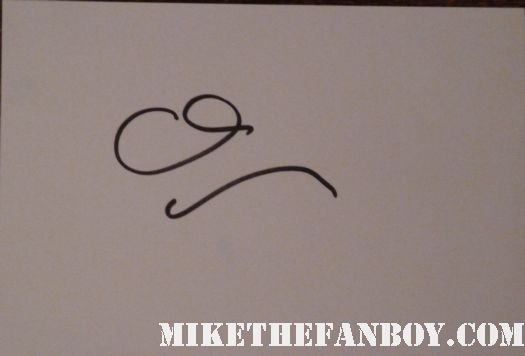 As soon as he finishes he’s back up on stage with everyone for an Avengers Assembled cast shot! 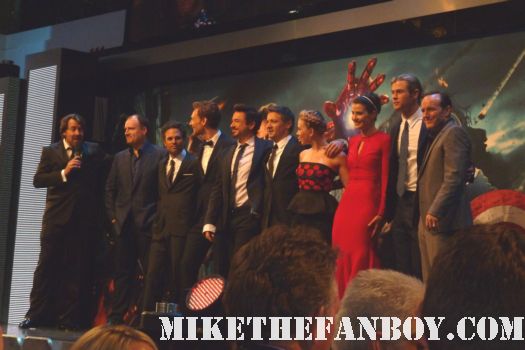 Wow! All that’s left is for everyone to head out for the film – but they’re coming past us! I’m leaning as far out over the barrier as I can, waving my magazine cover of RDJ and calling his name like a mad thing! There’s no time, however, and he goes straight past us, up the escalator and into the cinema. Exhale. Well, it’s all over now. A good event, it was fun – and I went home with squiggles from many awesome actors. RDJ may have eluded me, but he mentioned he’ll be back next year, so I’ll be there and will try again!

‘Til next time, guys!