Home / Movie Reviews • Reviews / The Birdcage Blu-Ray Review! Is The Robin Williams Comedy Hit As Funny As You Remember?

So many movies are a product of their time and watching them can be like unearthing a time capsule. Movies are indicative of fashion, consumer tastes, fears, attitudes and more, so it’s always interesting to watch a film that if shot today wouldn’t be anywhere near the same. It doesn’t mean that they’re not still fun to watch, but it’s just interesting to see things like that on screen. 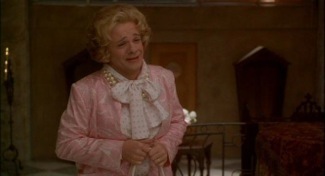 One such film is The Birdcage. Based on the 1973 play La Cage aux Follies, The Birdcage stars Robin Williams as the owner of a gay drag club aka The Birdcage. It’s South Beach’s hottest club and the main attraction is Starina (Nathan Lane). Starina AKA Albert is a tad over the top, in the first 15 minutes of the film he refuses to go onstage, thinks his lover Armand (Robin Williams) is cheating on him and thinks he’s too fat and old to be loved. 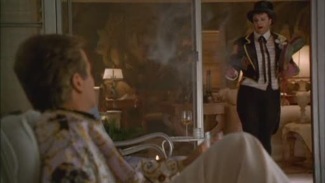 In fact Armand isn’t cheating on Albert but he is meeting another man for a drink. That man is his son Val (Dan Futterman) who is in town to break the news to his father that he has asked a young woman to marry him. His fiancé Barbara (Calista Flockhart) is conservative, but that fact glazes over Armand who is still reeling from the news of Val’s impending nuptials. 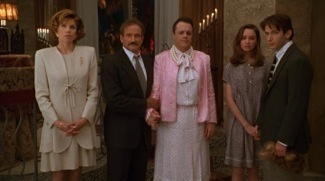 In fact Barbara’s parents aren’t just conservative but her father is Senator Kevin Keeley (Gene Hackman) who is the leading spokesman for family values and anti-gay rhetoric. Kevin is in the middle of a PR nightmare, as his co-founder of the Coalition for Moral Values has been discovered dead in a compromising situation. Senator Keeley’s wife (Diane Wiest) thinks a big family wedding will be the answer to all their problems.

So, they all take off to visit Val’s family, however Val told them that his father was a Greek ambassador and his mother was a housewife. Val breaks the news to Armand and asks him to play along. Armand isn’t found of this but relents. They enlist the help of Val’s real mother (Christine Baranski) but breaking the news to Albert is no easy task. He gets his feels hurt to hilarious comic effect. 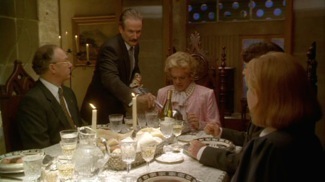 When the Keeley’s finally show up, Val’s mother gets stuck in traffic and Albert dons his wig and dress to help save the day. After a dinner party that doesn’t exactly go off without a hitch, a bunch of reporters discover the Keeley’s where a bouts and everyone’s cover is blown.

The film really hinges on the performances of it’s two leads. Both Robin Williams and Nathan Lane bring such a sense of poignancy to their roles. Williams in particular is very subdued, which is shocking especially considering the subject mater. He is really excellent in this role and plays off Nathan Lane nicely. Talking about Nathan Lane, I don’t think there’s been a role yet that really showcases his style and talent like this one. At once over the top and emotionally raw, Lane makes Albert a real person and not a caricature. There are true moments when he is so open and vulnerable you believe he’s not really acting. You can’t get much better than that.

The plot itself is a little dated, conservatives afraid of their in-laws being gay. I think that kind of became a moot point when Dick Cheney’s daughter became an out an proud lesbian. You can’t get more Republican and gay than that. Still, like I mentioned before film becomes a time capsule and it’s fascinating to see where we were and how far as a society we’ve become. 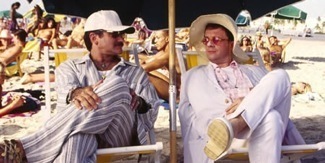 The Birdcage arrives on blu-ray in an excellent transfer. The pastel South Beach landscape is amplified by the cinematography and it contrasts the Washington scenes nicely. The blacks are solid and the pastels look great. The picture does have some softness in scenes, but it’s not always noticeable. 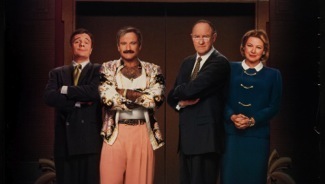 I was really hoping for some extras and special features but sadly there are none with this release.

Overall, it was a great walk down memory lane watching the Birdcage again. The performances were better than I remember and seeing the film on blu-ray was a real treat. I suggest checking the film out once again, I bet you’ll enjoy seeing it just like I did.

The Birdcage is out now on blu-ray! 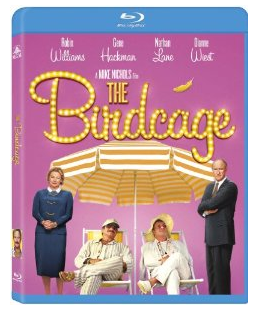