With the success of The Hunger Games and now Divergent, it seems like every young adult book is being turned into a movie. However, for every Twilight there’s a Vampire Academy or Mortal Instruments lurking behind a dark corner. It seems like, a young adult adaptation is a tough genre to crack, which is why I was so happy that The Book Thief is a notch above the rest.

It’s interesting to put The Book Thief into the young adult category, it’s themes are way more adult in nature and it’s not going to spawn any sequels or franchises. Still, this German set literary work is indeed a film for the literary minded. 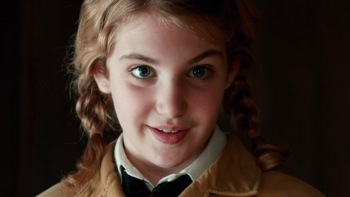 The narrator of this tale is in fact Death itself. With that in mind, it’s fairly clear that this isn’t going to be a light hearted romp. In the opening narration Death tells us that he has a fascination with a young girl named Liesel Meminger (Sophie Nelisse) who is riding on a train in a rough winter. Death however, isn’t here for Liesel, he’s here for her brother who dies in his mother’s arms on the train. He’s forced to be buried right next to the tracks and when the gravedigger drops a book, Liesel picks it up as a memento. It’s soon revealed that Liesel’s mother is fleeing Nazi Germany and dropping off her children with a foster family as she has a Communist background. 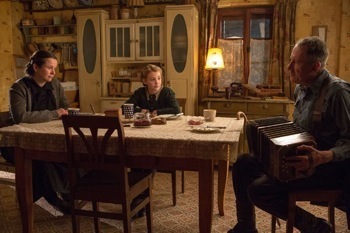 Liesel arrives in a small German town and meets her foster parent Hans Hubermann (Geoffrey Rush) and his harsh wife Rosa (Emily Watson). Rosa is mad because it’s only Liesel who has arrived and she wanted the money she would have gotten from fostering both children. Hans however, is kind and forms a bond with Liesel almost immediately. 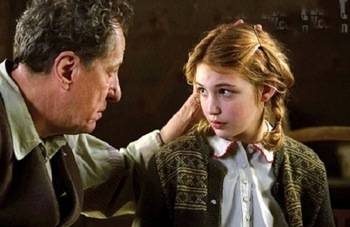 A neighbor boy, Rudy (Nico Liersch) sees Liesel arrive and runs over so that he can take Liesel to school with him the following day. Liesel however, is illiterate and that causes the other kids in school to make fun of her mercilessly. When Hans finds out about this, he forms a makeshift school to teach Liesel to read and help her learn to write on the walls of the basement in chalk. Liesel starts to fit in and eventually becomes a “Hitler Youth” with the rest of her classmates. The peace of their new home life is turned on it’s ear when a Jewish refugee, Max (Ben Schnetzer) arrives at their door, and needs to cash in a debt that Max owes him back in WWI. Max’s father saved Hans during the war and he promised he would do anything to help his family in the future. 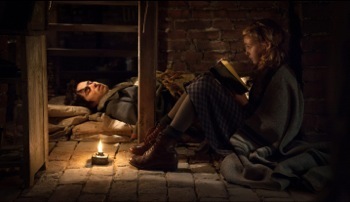 Meanwhile, Liesel is at a book burning rally and is forced to throw a book onto the burning pile. She stays behind however and rescues a copy of “The Invisible Man” that she takes home. Hans is nervous but eventually allows her to keep it. She is seen by the Mayor’s Wife and when she takes laundry over to the Mayor’s house is confronted by the woman. However, instead of chastising her, the Mayor’s Wife commends her and brings her into the library and shows her all the books that they have. They form a bond and she becomes a surrogate mother for Liesel. 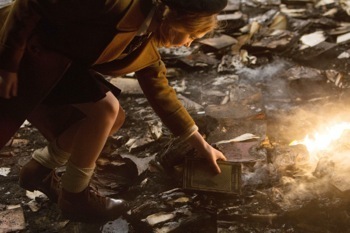 There are many other plot threads interwoven through the film and eventually it forms a tragic climax. The film itself is a form of pure beauty with some amazing cinematography and wonderful performances. Geoffrey Rush in particular is perfect as Hans and uses his large frame to show a soft, sweet gentle side we don’t often see from him. As Liesel, Sophie Nelisse has the hardest job to do, and she does it well. It’s a subtle performance that in lesser hands could have been cloying. Here, she’s just the right amount of uneasy and nuanced.

On blu-ray the colors really enhance the films landscape and design. It’s a very realistic film and the digital transfer if flawless. The white of the snowy landscape to the dank interior of the homestead, the high definition transfer helps bring out added nuance. 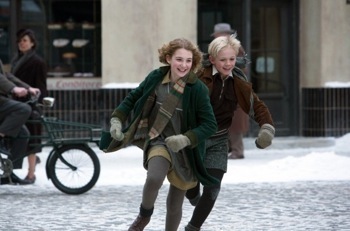 Sadly, the special features are somewhat lacking. There are about six minutes of deleted scenes and the theatrical trailer, which are fairly standard these days. The lone featurette, A Hidden Truth: Bringing The Book Thief to Life is a half hour look at the making of the film. It’s very well done and worth watching, especially for the casting process portions. 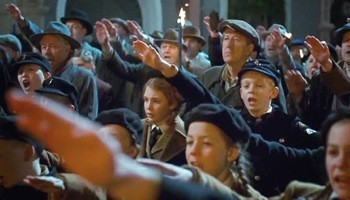 Overall, while The Book Thief is by no means a pick me up, it’s a wonderful film that rises above the standard young adult fair. The performances are amazing and the scenery and cinematography so well done, you’ll feel like you were in Germany with the characters. I highly recommend checking this adaptation out, you will not be disappointed!

The Book Thief is out now on blu-ray! 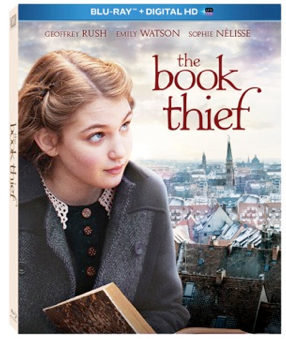