I love Marie!
I totally dropped the ball, because Marie sent over her recap of visiting Comedy Central’s Colbert Report right before the holiday and I… I spaced! Doh!

So sorry for the delay, but let me tell you, this is such a great recap! Marie is adorable and she had a great opportunity to check out the set of The Colbert Report before the show aired it’s final episode and even meet Stephen Colbert!

Check out Marie’s awesome recap below!

This Thursday will be a sad day for fans of Comedy Central’s fake cable news show “The Colbert Report”, which is set to air its final episode. For 9 years, the character Stephen Colbert – egotistical and oblivious conservative TV pundit – has delivered his own brand of “truthiness” to the Nation, choosing to report the news with his gut over the facts. His humor and satire will be greatly missed, but I’m excited that the real Stephen Colbert will himself be stepping into the spotlight when he takes over The Late Show next year.

To commemorate the end of The Colbert Report, I’ve asked Mike if I could share my experience visiting the studio to attending a taping of the show back in 2007. I was so fortunate that a friend of mine had a friend on staff, who told us to arrive around 5 p.m. at the studio. When we got there, we saw a line people under a blue awning labeled The Colbert Report, so we knew we were in the right place. 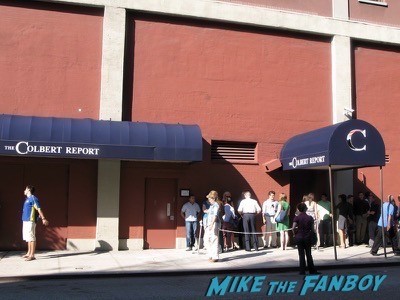 Not long after getting in line, we were warmly greeted by the staff member who had gotten us tickets to the taping and were surprised to get pulled from the line and brought into office to wait. The Colbert Report office! We sat at the conference table and were given the daily schedule and rundown of the show to read while rehearsals finished. I could hear a muffled Stephen from the studio and the excitement started to well up in me. I felt so lucky to be sitting there, looking around at the brick walls covered with props that had been used on the program. Eventually the time came for us to go into the studio. From the office, we were walked through the backstage area. The backstage hallways were lined with photographs of episodes with Stephen and some of his most prominent guests. We then came to a black curtain which opened up into the studio. It was really quite surreal being on a set seen so many times on the small screen. And it was striking how much smaller it actually is compared to the way it appears on television. 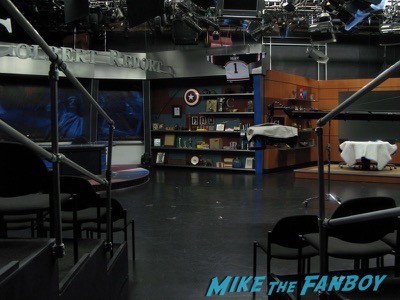 We were told we’d have a chance to look around the set after the show and we should take our seats before they loaded the rest of the audience into the studio. I got a tip that the best seat in the house was the far right seat of the left section, which gets the best view of the desk, so I grabbed it. Once the audience was all settled, comedian Pete Dominik came out and did the warm-up. He showed us the microwave that Stephen stole from Bill O’Reilly’s set when he was a guest on The O’Reilly Factor. Then he told us about Stephen’s wrist injury that had happened the week earlier. Stephen had been running around the studio before the show, something he did before every show to get the audience psyched up, and slipped and fell on his wrist. He went on to do the whole show with a broken wrist.

Finally, after a big build-up, Stephen came out to greet the audience and did a short q & a as himself, the real Stephen Colbert. The show got started and it was so exciting to watch Stephen in action. Between the first and second acts of the show when the cameras weren’t rolling, I found myself just gazing at all the different knick-knacks and items on his shelves next to his desk. It was then from my periphery that I saw something blue fall to the ground near me. I looked down to see a paper airplane. I picked it up and saw something written on it. It then immediately struck me that it was Stephen Colbert’s signature! I looked up shocked and there he was smiling at me from his desk! He had folded up the front page of his script, signed it and then threw it at the audience. I didn’t really know what to do I was so excited, so I just sort of waived the paper airplane at him and smiled back. You know that new Mike the Fanboy column that talks about people’s favorite autographed pieces in their collection? Well, that paper airplane is one mine.

After the show, I got a closer look at the set pieces on his shelves, which had some funny inside gags. 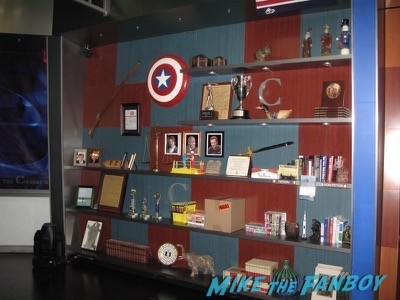 I also got to sit at the “C” shaped desk and hold Stephen’s pen! 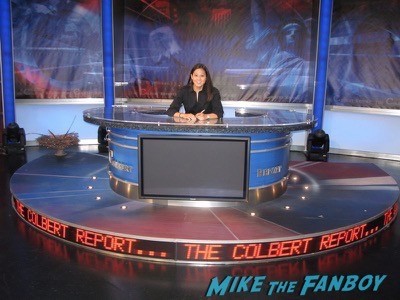 We were then taken for a quick tour backstage and told to wait in one of the green rooms, and we’d meet Stephen if he was available. I tried not to get myself too excited in case it didn’t work out, but sure enough, a few minutes later in walked Stephen Colbert. The whole meeting was quite frankly a big blur because my brain was in overload, but I remember him having a very firm handshake, and he was just so kind. He signed a couple of things for me that I brought just in case, and was gracious enough to pose for a photo. The person I was with who was taking the photo knew how much it meant to me and asked for one more just to be sure it turned out. Stephen kindly obliged and then he went on his way. I may have physically jumping up and down after he left, but when I looked at the photos, I think my heart also skipped a beat. You see, in the photos, Stephen had posed in his two different trademark expressions — his serious cocked eyebrow face, and his hyper-smile and point pose. 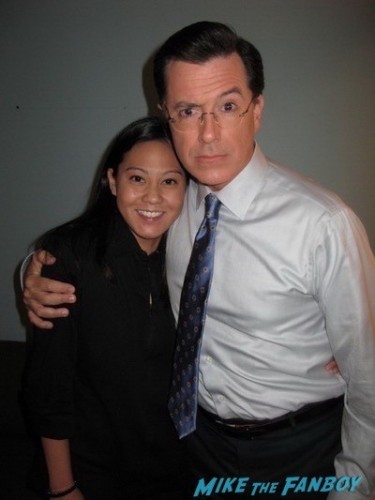 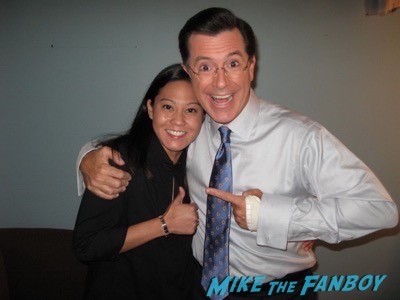 That was pretty much the perfect ending to a perfect day.