James… God bless you… He headed out to the Counselor premiere and who did he meet… Michael Fassbender! Doh! Still to this day I still have not met Magneto! Grumble… That’s not all… Penelope Cruz! Say wha?

October is a month I have been looking forward to for a while; there’s a fairly large number of awesome names coming to London for the London Film Festival, plus a few other events to enjoy too. Anyways, my month got off to a nice start yesterday with the premiere of Ridley Scott‘s latest film, The Counselor, with Ridley, Michael Fassbender, Javier Bardem, and Penelope Cruz due to attend. Having met all bar Penelope before, she was all I was really worried about getting.

However, when arrivals started, every car with a cast or crew member in drove along the carpet, past all the waiting fans, right to the cinema door where the person got out. Rather than get out at the top of the carpet, as done at every other premiere in history. All the premieres I’ve ever been to, this was the first where I’d seen cars drive along the entire red carpet. It was then up to the celebrity how far they came back to sign, which obviously wasn’t going to go smoothly. Let the anxious waiting game start.
Ridley Scott, the director of films including Alien, Prometheus, Blade Runner andAmerican Gangster arrived and started talking to the press. As time went on he signed a fair few, but sadly not where I was. However, I was lucky enough to meet him at the premiere of Prometheus last summer, so I wasn’t too worried.

Next to arrive was who I wanted to get this evening; Penelope Cruz. The star of Volver, Vicky Cristina Barcelona, Nine and Vanilla Sky got out of her car, and straight away started to sign. However she seemed to be skipping quite a few people; she’d sign one, skip a handful, sign another, and so on – but she was getting closer to me than Ridley or Javier had. Finally she got to me, and kindly signed and dedicated my autograph book. Woo, mission for the evening accomplished! 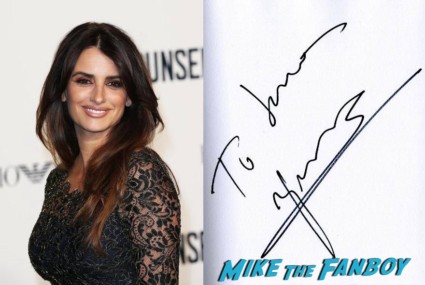 She was followed by Javier Bardem, best known for his roles in Before Night Falls, No Country for Old Men and Skyfall, who did much the same as Ridley; he spoke to the press, posed for pictures and started signing, but again stopped before getting to me. This wasn’t going well. Again though, I met Javier at the Skyfall premiere last October, so I wasn’t too fussed. Completely out of the blue, Sigourney Weaver turned up, not in a car but on foot. Shocked! Hollywood royalty walking through the back streets of Leicester Square, not in a car! She didn’t sign, though. I guess she’d turned up to support her Alien director. Still, a nice surprise, and someone else I have met before, albeit a fair few years ago at the Wall E premiere.

In all of this Michael Fassbender had arrived, spoken to the press and had started to sign. The X Men, Inglorious Basterds, A Dangerous Method, Shame and Prometheus star signed for pretty much everyone waiting, he was as good as I’d told he’d always been, 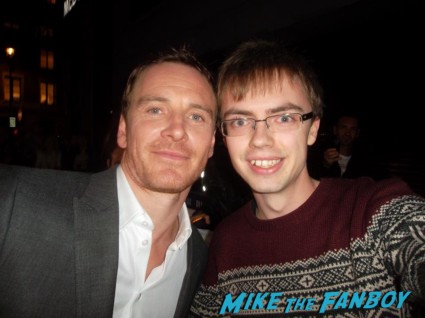 and indeed as good as he was at the Prometheus premiere last summer (I don’t think I ever did a write up for that!). I got an index card signed and a photo with him. Top guy! 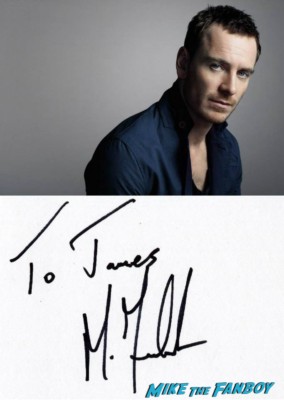 Tom Hooper, director of Les Miserables, The King’s Speech and The Damned United came as a guest, and was happy to sign an index card for me and to pose for a photo. I was somehow the only person to recognize him, which rather surprised me!
and that was that. I didn’t get a few, but having met them all before, I can’t claim to be worried about that – I got the one I’d come for (Penelope), so it’s all good! Now, roll on the next set of A Listers in town this month!