Home / Conventions • Fanboying! • Weeds / The Craziest Thing I’ve EVER DONE For An Autograph! Running Through The Festival Of Books! Jumping On A Golf Cart! Weaving Through Families! All To Meet Weeds Creator Jenji Kohan! Autographs! Photos! INSANITY! You Can’t Make This Crap Up!

I honestly don’t think I’m that insane when it comes to this hobby. I mean, when I say insane I mean running into traffic, dodging cars like frogger, shoving a photo on a rolled up window, running with a moving car… I’m only a 1/2 crazy.

Okay, I don’t know why that makes me feel better but it does.

Well… It’s official, today I became full on cray cray and took Karalee with me.

I’m going to have a bunch of reports from the Festival of Books this weekend including another stellar report on getting dissed by Molly Ringwald, but… the main event… The cherry on my ice cream sunday… Is the most insane journey I have ever gone on. 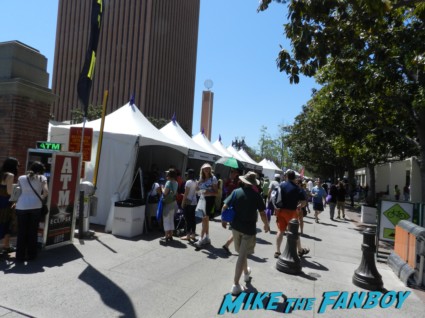 This weekend, none other than Jenji Kohan was doing a q and a at the Festival of Book. I know, I know… I can hear half of you going… Who? Jenji Kohan created one of my favorite shows of all time… weeds. And when do you see her out and about? Never!

So… Naturally I had to get her to sign some Weeds stuff for me. Ace and OTG John were also at the event milling about. I debated about where to go stand. Traffic sucked ass and we missed the panel, so it already started. Doh! Jenji Kohan is there for her new series Orange is the new Black.

Now what? Do we wait where people get dropped off or do we go to the venue where the q and a was, which was pretty far.

I debated… Karalee said, “If it was me, I would go to where you know she is, but I’m not really sure, I’m new at this.”

And still I debated. Finally with 10 minutes left until the q and a was supposed to be finished, I said, screw it, let’s go to the venue.

We started hoofing it. Ace was on the case (I’ve been waiting to type that) and said he would call me if she made it here before we got back.

Now, I’m directionally challenged and apparently so is Karalee and together we ended up getting each other lost a couple of times. USC is a large sprawling campus and I’m now convinced they should just throw Comic Con there. But I’m digressing.

We turn the corner and see the building where Jenji Kohan is holding the q and a. Karalee looks up and says, “Wait, isn’t that her… on the golf cart?” I turn my head and fuck on a fiddle there’s Jenji Kohan on a golf cart just passing us by.

Here’s where it gets nuts. I really wish it was on camera, seriously.

Karalee yells, “run!” So we start running after the golf cart and let me tell you, I am out of shape and it’s not pretty. Karalee said and I quote, “I don’t run, I don’t run for anything, a handicapped girl beat me in our class race in high school and here I am running after a golf cart for someone I didn’t knows name until earlier today.”

The cart was stopped a stop sign, and yet I kept going. Out of the entire Festival of Books we were the only ones who ran the entire day. Trust me, it’s just the truth.

Then Karalee says, “MIKE!” I turn and Karalee has talked her way onto a flatbed golf cart! Seriously, it was like a movie!

“follow that cart!” I think I yelled, really at this point I was lucky to still be breathing.

Louis, the cart driver was the bomb. Karalee told him that we needed to catch Jenji Kohan for an interview and we flashed our press pass. Saint Louis, as he will now be called, came to our rescue.

A tad bewildered he suddenly got caught up in an unwitting golf cart chase though the Festival of Books, Saint Louis asked, “Which way did she go?”

Karalee exclaimed, “can the cart go faster?” Saint Louis said, “This is as fast as it goes, you can see I have the pedal down to the metal.”

I can’t make this shit up.

When I saw Karalee got the flatbed golf cart, I wanted to be all dramatic and jump on the back like in a 1980s action movie but I held myself back.

Weaving through all the book shoppers and small children with animal balloons we could see Jenji Kohan’s cart in the distance.

Suddenly, Louis says, “I can’t go any farther, see there are poles that our blocking our path. I’m very sorry.”

Karalee says, “No, you were awesome friend!” And we jump off our sequestered cart and continue our run.

When the cart stops though, we both see that Jenji Kohan wasn’t on that cart. We followed the wrong golf cart and almost took out a family of seven holding balloon animals. Balloon animals are very important here at Festival of Books, don’t ask me why.

“frack me!” I yelled as I wanted to pass out from lack of water, heat and having to run for .7 seconds.

But we knew they had to check out here because this was quite literally the place we were at before. Ace was right and we went on this giant goose chase for nothing.

I’m at one end, Karalee is at the other and Ace is looking in the middle. I will see Jenji Kohan.

All hope did look lost though… I mean, what if she went back to her car, what if the golf cart was gone… Oh sadness….

Then, after about 20 minutes of pacing, syncing up, trading spots and trying to figure out where the hell people go in and out. Jenji Kohan walks out, right to us.

When I freak it’s not pretty.

Going up to Jenji Kohan, I say, “Jenji? would you mind signing a quick autograph?” She was so nice. Like floored that anyone cared. 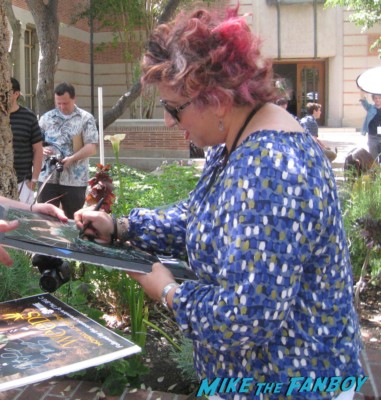 She was like, “ummm sure!” I literally got to chat with her for a few minutes and told her how much Weeds means to me, how it’s one of my favorite shows, etc.. She was honestly so touched that anyone would stop her, I think it might have made her day as well. 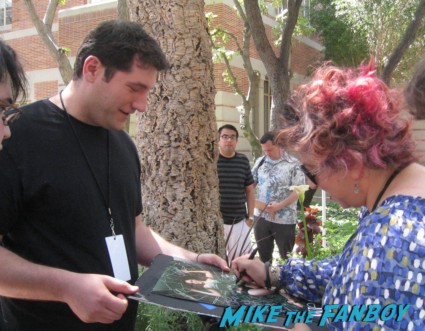 I asked Jenji Kohan to write, “Created by Jenji Kohan” on both of my mini posters.

OTG John found the two books in my bag and got those signed for me as well. 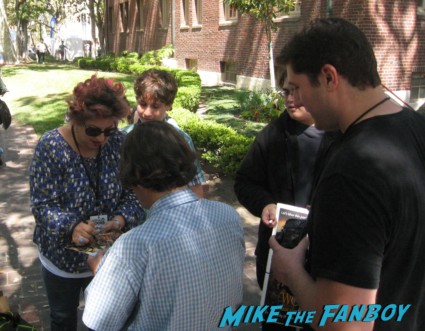 So nice. Seriously… to meet the people who brought the characters on my favorite show to life, is such a special and wonderful thing. I mean… I know a lot of people really care about the actors but sometimes getting the meet the creators is even more special.

Karalee told Jenji Kohan how we chased her golf cart down in order to meet her and she was like… “Oh My God! What!”

I totally expect that to make it’s way into an episode of her new series Orange is the new Black. Seriously. 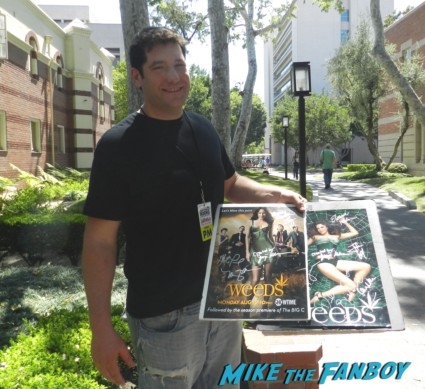 Talk about a Fanboy adventure! 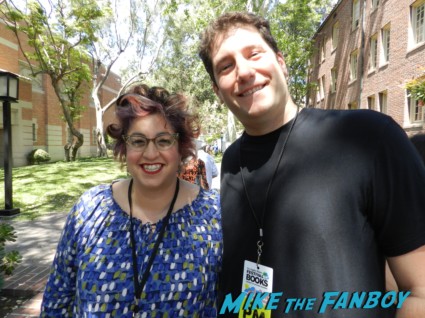 Thanks again to Karalee for joining me in on the craziness! I quite literally couldn’t have done it without you! 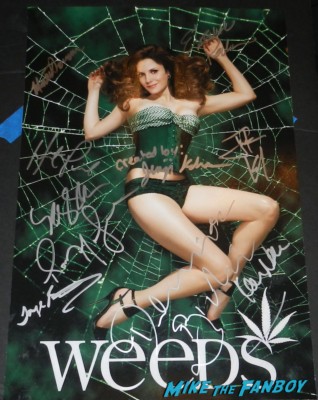 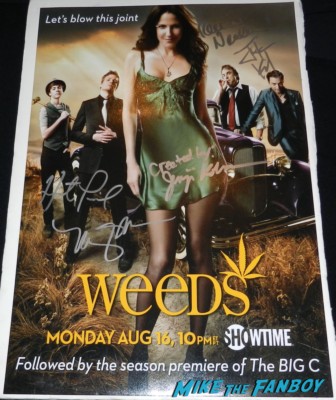 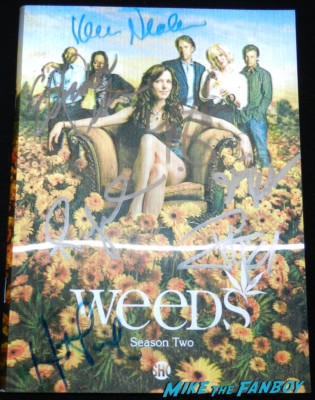 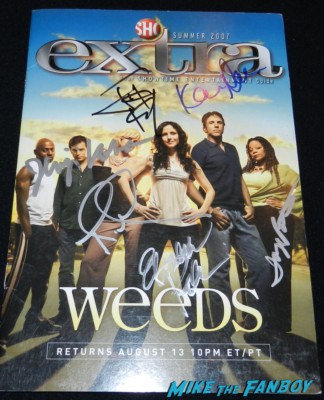