As Halloween swiftly approaches, my favorite part of the season has to be the horror films. It’s a great excuse to revisit the iconic slashers of the past such as Jason, Michael Myers, and of course Chucky.

Yep, the demonic doll from the Child’s Play series has always been a pint sized favorite of mine. And he’s baaaack, this time in Curse Of Chucky!

Voiced like a demonic cherub once again voiced by Brad Dourif, Chucky arrives in a shipping box unannounced at the doorstep of Nica’s house. Nica (Fiona Dourif) is wheelchair bound after an accident and living with her mother Sara (Chantal Quesnelle).

Shockingly, Sara dies during a brutal murder and Nica’s family comes to her aid. Barb (Danielle Bisutti) is Nica’s sister who needs some quick cash and wants to put Nica in a home, Alice, Nica’s Niece, a priest, another dude, and more kill fodder arrive so Chucky can wreak havoc. 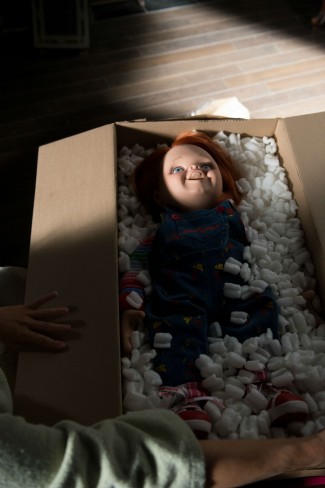 Let’s be real… Does plot matter? What we want to see from a Chucky film is some quick puns and brutal killings at the hands of a maniacal doll. After the fairly straightforward Child’s Play and it’s two sequels, Chucky turned into more of a self referential parody. Jennifer Tilly joined in the fun during Bride of Chucky and Seed of Chucky.. Well… That last film was a little too off the wall for my taste. 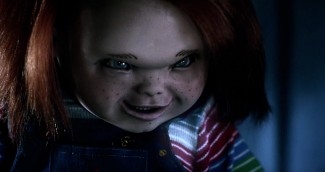 In Curse of Chucky, writer director Don Mancini (Who has written every Chucky movie to date) steers the ship back to the original and it’s a welcome change. The murders are more gruesome and I like the fact that everything is staged inside one big house as opposed to say, a military academy. 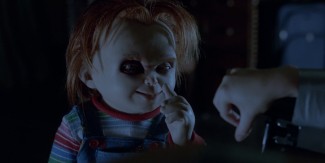 The one genius thing that Mancini does is continue the story of the killer doll who won’t die, while not forgetting what happened in the previous films, something a lot of other slasher movies are guilty of. In fact, he not only references them here, he almost takes pride in the fact that it’s a continuation of the story.

I’m happy to say it delivers in spades. I would go so far as to say that this entry into the Chucky cannon ranks right up there with the first. As a straight up horror film, it’s a treat and I jumped more than a few times. As a Chucky film, it finds it’s groove and for the first time in a long time with this series, the film gives us a chance to know the people before they get hacked and bludgeoned to death! Woo hoo! Make sure you stay all the way through the end credits. 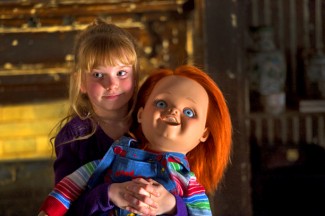 Curse of Chucky looks amazing on high definition blu-ray. The colors are very specific for this film (a rarity for direct to DVD horror) and it adds a lot to the proceedings. The image quality is sharp and the details are very pronounced.

Special features on this release include rated and unrated cuts. Neither one is superior over the other. The Unrated cut only adds a few minutes into the film and won’t add or detract from the overall quality of the presentation. 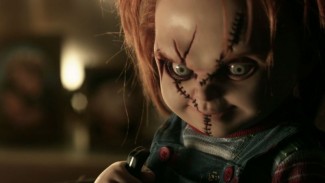 There is a commentary track which is quite informative. It’s great to hear writer/director Don Mancini do this track because he has been the man writing Chucky since his inception and shares pretty much everything a fan would want to know about this movie.

There are a few featurettes, A making of doc, Bringing Chucky to life and storyboards. There are also six deleted scenes and another short feature talking about Chucky’s horror legacy.

The only thing to skip is the gag reel. It’s only a couple minutes long and… let’s just say, not worth that.

Overall, if you love horror, The Curse of Chucky will make a fine addition to your collection. It’s a nice return to a more straightforward horror film that the previous sequels and is way better than it should be considering it’s straight to DVD fare.

The Curse of Chucky is out now on blu-ray 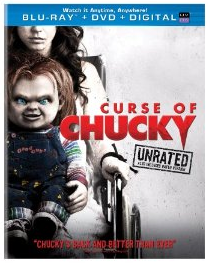