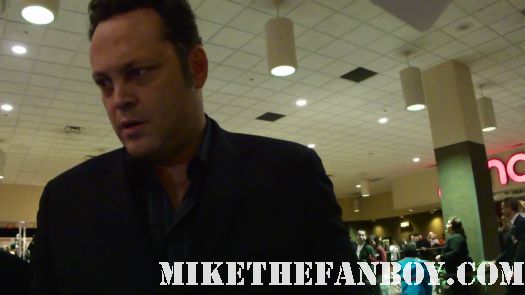 Ah, Erica my windy city correspondent! This time she is on the front lines in Chicago for the Dilemma premiere. The sure to be instant classic from Ron Howard starring Vince Vaughn, Kevin James, Winona Ryder, the genetically blessed Channing Tatum, and more. Erica braves the cold harsh Chicago weather to get her… Dilemma mini poster signed… She’s been dying for this movie to come out, just dying… much like her love for the Shirley Maclaine classic In Her Shoes, The Dilemma is all she’s been talking about, so without further ado here’s Erica’s full report with pics, video and more! (There was a tad bit of sarcasm there, just a tad! Erica worships the quicksand I walk on… lol… I must stop quoting Steel Magnolias, must stop quoting Steel Magnolias…) 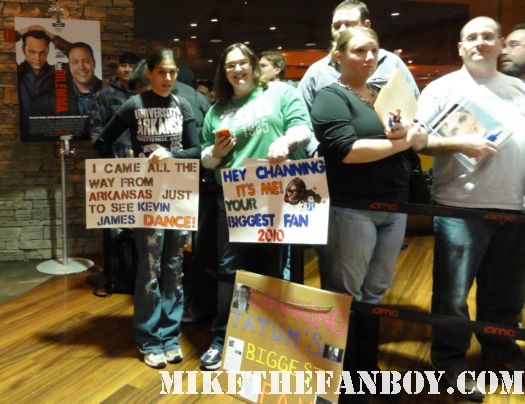 Alien robots weren’t the only things angling for their close-up last summer in Chicago, though they certainly were the showiest. Ron Howard was also in town filming the movie Cheaters which was later renamed The Dilemma. Got to love Vince Vaughn’s passion for this city! He brings the production here and has the official red carpet here and nowhere else.

This premiere has gotten some pretty good buzz so I arrive pretty early and only to find that the section closest to the red carpet is capped since people arrived at 10 am to wait. Really? This could get really nutty. 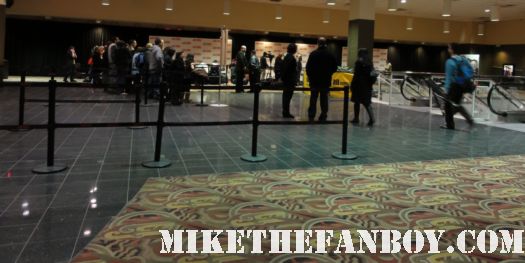 It’s the first time we’ve had a cast this big in the middle of January so the carpet is set up inside and we’re all trying to figure out how this is going to work. I head into the opposite pen which is quite far, but not a bad place, depending on the set up. Only problem is that it’s quite packed with professionals so I wind up on the side, about halfway down. Not too bad, but it’ll take some work to get people to turn the corner to get to me.

My sister arrives at just after 5 pm and we settle down to wait the circus as it’s fairly chaotic on the floor. There is more press than ever, crammed into about the same amount of space they usually have. ET and some other national outlets are here, there’s a ton of security all around and people keep getting herded about.

The studio hands out mini-posters which is a nice bonus since they haven’t done that much to market this film.

At around 6 pm, a few attendees arrive. One of them is Rocky Wirtz, the new owner of the Chicago Blackhawks. Ah right! The main leads are supposed to be big Blackhawks fans and several scenes take place there! If the Blackhawks aren’t playing, then others might show as well.

Sure enough, another player, Troy Brower comes up and then Dave Bolland as well. They’re kind of circling around not knowing what to do since they’re so early. 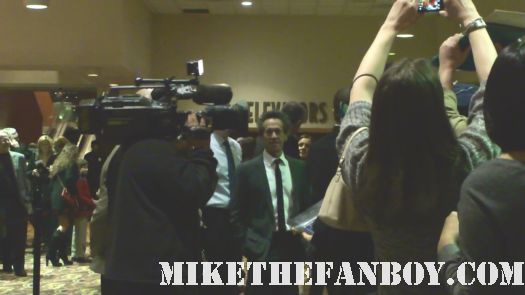 At around 6:15, the first arrival appears. Not sure how they’re bringing the talent in since suddenly I see Ron Howard with Brian Grazer. Really? This early? Brian is just watching as Ron signs for a good minute for the professionals up front, but does not turn the corner towards us. We yell for him and got a vague smile, but then he’s off across to the other side and starts the carpet. Disappointing as he’s the main reason I’m here and this is my third try for him! 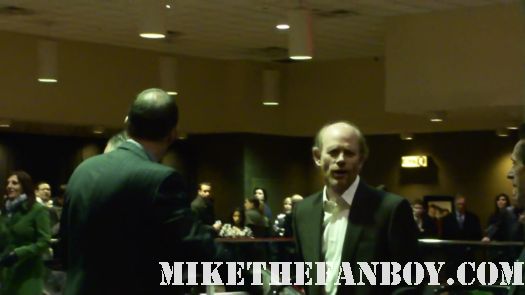 After a while we see Roger Ebert go by, looking way, way different from the last time we saw him, but in good spirits. Christie Hefner (in a full length blond mink coat) arrives and so does Blackhawk Patrick Kane to a hail of yells from the crowd. Aside from Rocky, none of the Blackhawks people come over. 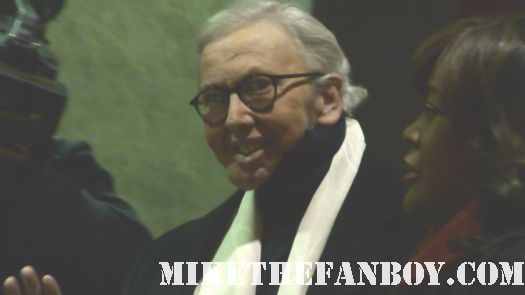 Greg Olsen (TE for the Bears) also arrives and basically lumbers over the crowd with his great size. He heads over and signs a few for the professionals. 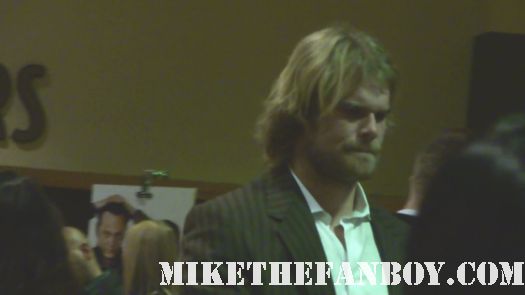 Finally we get a cast member when Vince shows up at around 6:45. He comes in and makes a beeline to start signing. He goes down our entire pen, crosses over and does the other side. If anyone is going to do it, it’ll be him as he’s the star and producer. My sister misses him in the scuffle though. I did get him, but he’s signing in the darkest part of the poster so you have to squint to see it. 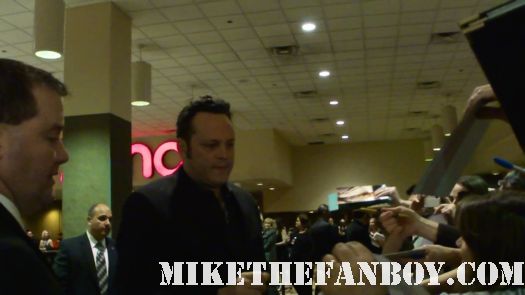 At 7 pm, no one else has shown and security is getting bored. At around 7:15, Winona Ryder shows. Mike’s given me his Edward Scissorhands script so I’m on a mission to try and nab her although she’s very difficult from what I understand. She signs a handful where the professionals are and then leaves our group without so much as a backward glance at the rest of the crowd. She signs three more on the other side and then gets on the carpet. That’s it. Yep, deserves her reputation of not being fan-friendly. For a woman trying to make a comeback, you’d think she might do a bit more with the fans than, say, not looking at them altogether. UGH! 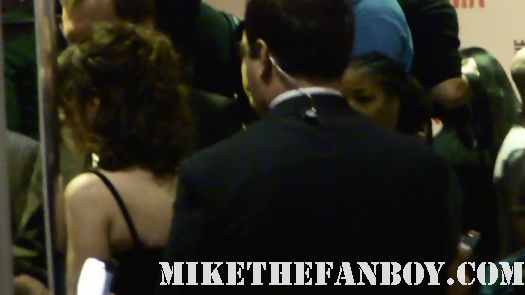 Kevin James comes in next. He signs for the professionals and then is about to cross over to the other side of the room when he sees all of us down the side. He asks his publicist if he should sign and the guy drags him off. We start to yell more and Kevin turns to wave and looks at us forlornly and decides to screw his publicist. Kevin waves him off and heads right over! Kudos go out to the man who decides to spend a few minutes with his fans! He does our whole side and then rushes off to the carpet (with my pen in hand!). Yeah for him! 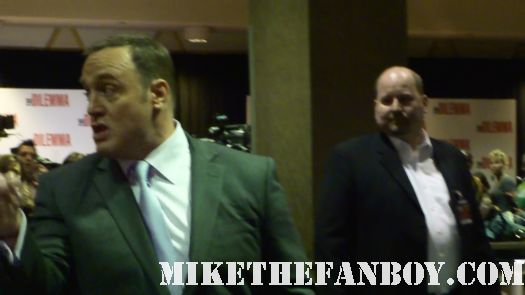 Jennifer Connelly is next and approaches everyone with a serene sort of beauty. She looks gorgeous and is smiling and engaged with the crowd. Her baby bump is noticeable and looks great in her dress. She signs a bunch until she gets hauled away by the PR rep which is, luckily, after she signs for us. 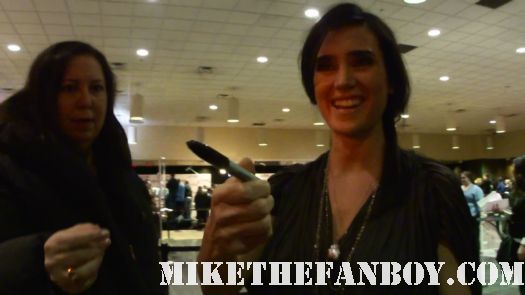 We wait a bit and finally Channing Tatum arrives with his wife Jenna Dewan. This genetically blessed couple are friendly and upbeat. He goes down the line complaining of the cold, but still loving Chicago. He gets everyone and does a few pictures and poses a bit. He then crosses over, signs a handful and gets on the carpet. 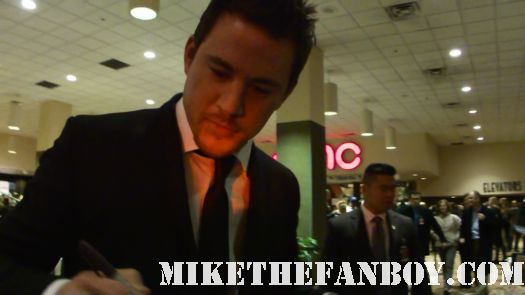 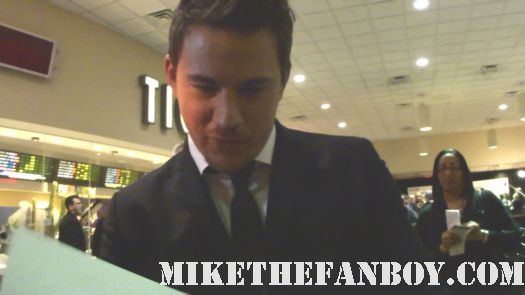 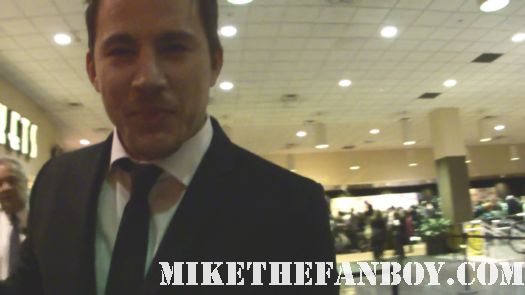 And that’s everyone for the carpet! We head to a second chance position in case anything happens. I can see Ron Howard chatting with Patrick Kane. The other Blackhawks are all here talking to each other. Greg Olsen was the only sports guy to walk the carpet and he says hello to the hockey guys who are way, way shorter. They’re actually normal sized as opposed to Greg who is more super sized at 6’5″. 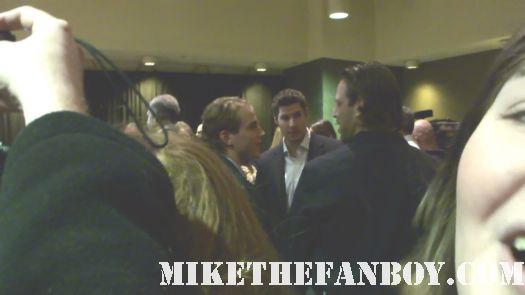 Ron’s conversation ends and he turns and begins to sign for the crowd since we are all literally in front of him. I squeeze in and catch his attention with my Parenthood laser disc. Yeah!!!! Linda squeezes in to get him on Apollo 13 and then things get nutty and I can’t get him on anything else, but I’m happy to get him on this third try!

They start to move all the talent upstairs so we try one last time for the cast. Vince Vaughn signs a few and I get close to Winona who signs one for a girl on the other side and ignores everyone else. Does not even look up. Uh huh.

It’s too crazy at this point so nobody gets anyone else, but Channing waves at the crowd one last time.

Aside from Winona, we got everyone who was really very nice. A shout-out goes to Vince Vaughn for doing this in Chicago and also to Kevin James for coming back to the crowd. Also, third time’s the charm with Ron Howard so I’d definitely call this a good night! 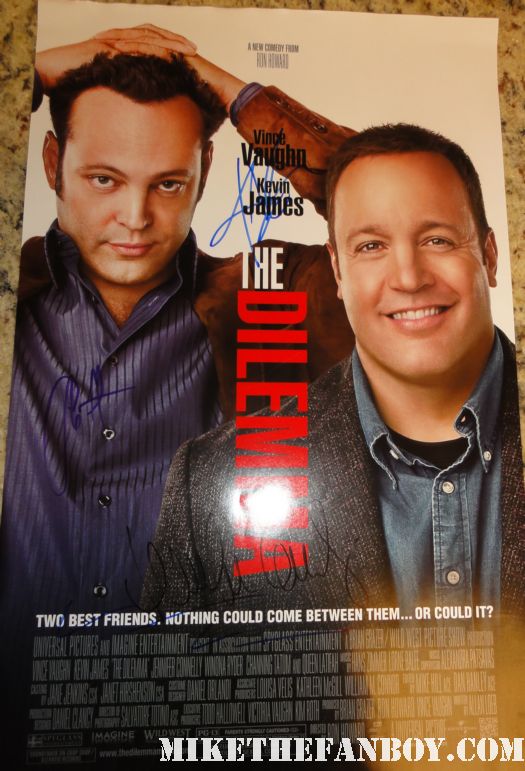 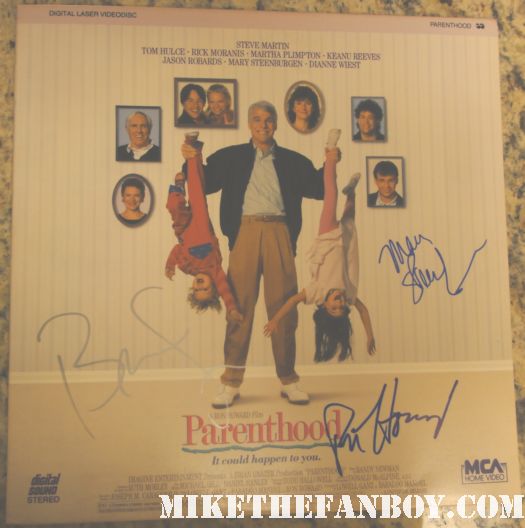