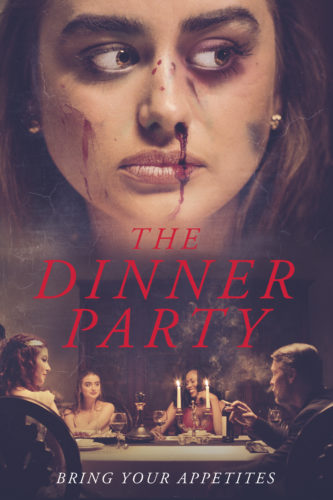 Don’t dress up for this disastrous party. “The Dinner Party” serves up a boring, bland party experience you wish was digital.

Eccentric producer and renowned surgeon Carmine Braun (Bill Sage) has invited aspiring playwright Jeffrey Duncan (Mike Mayhall) and his wife Haley (Alli Hart) to his home for a semi-annual dinner party. Thinking his new play might be produced on Broadway, Duncan drags his wife enthusiastically to the secluded mansion. However, the guests’ gruesome intentions soon become known once they discover they’re at a dinner party for cannibals.

Conceptually, “The Dinner Party” echoes entertaining 80s films like “Happy Birthday to Me,” “April Fools Day” and “Society 1989” with its gory group setup. However, beyond those similarities its tonally and visually similar to last year’s “Ready or Not” meets “Hostel.” The concept of eating the rich and eccentric rich people have been perfect horror fodder for decades. The question is, what’s going to make you standout?

Initially I anticipated a film like “R.S.V.P.” or “Satanic Panic” expecting a dark horror comedy with guests being killed off one by one or something in that vein. After all, cannibals hosting a dinner party sounds sensational and awesome. Sadly, “The Dinner Party” is over two hours too long dragging the entire time with glimpses of fun dialogue, but nothing much else. It’s like attending a barbecue with a vegan, why even bother?

The entire time you’re tempted to continually compare “The Dinner Party” with “Ready or Not,” but there are no likeable or relatable characters. The fact it nearly takes 45 minutes for the film to get going doesn’t help matters. Considering cannibalism and gore are involved, you would think a horror movie would take more pride being excessive, exploitive and entertaining. Sadly, it’s lacking in all three categories.

If nothing else, you would hope the acting and writing would be better. There are genuine glimmers of hope with some snappy dialogue, but those fleeting moments are sadly forgettable amongst meh acting. The movie does try to address lingering effects of trauma and infuse the film with flashbacks, but the clumsiness continuously disrupts the flow of the film. Too bad “Masters of Horror” isn’t around as this would’ve been a fun flick for an hour-long horror show. Even something like the current “Creepshow” might have been better suited considering the constant boredom despite the frequency of nudity and blood.

Last year, there was a horror anthology series “Into The Dark” with each episode inspired by a holiday. A better alternative for your time would be the episode “A Nasty Piece of Work” starring Julian Sands (“Waxwork” and “Arachnophobia” and Angela Sarafyan (“Westworld”) if you wanted to see a more recent scary “dinner party.” Unless Uwe Boll is one of your favorite filmmakers, pass on the invitation for this dinner party. Instead put on your jammies and stay in bed.