Some Saturdays are better than others. After having an enjoyable morning at a “Little Women” FYC (https://www.mikethefanboy.com/little-women-q-and-a ) event I managed to close off my evening with a fun double feature of “Pulp Fiction” and “The Fanatic” (https://www.mikethefanboy.com/the-fanatic-movie-review ) with “Saturday Night Fever” himself Mr. John Travolta. Last year I decided to skip a few events with John Travolta and kicked myself for not attending considering how engaging he is to fans. Mr. Travolta didn’t disappoint.

I decided to arrive super early, but with it being Golden Globes weekend people slowly trickled in before the sold out crowd packed the audience. Now normally at most double feature films, the Q&A occurs between the films. However, the Q&A happened after “The Fanatic,” which was confusing for some audience members as they kept confirming with one another so they could make “appropriate meal plans.” After all, popcorn and soda isn’t the best dinner option after 4hrs of entertainment.

Undoubtedly, the excitement in the audience was palpable and swelled once “Pulp Fiction” came on screen. Luckily there were a dozen or more people who never experienced it so they were able to enjoy the film for the first time on the big screen. Afterwards there was a brief intermission before “The Fanatic” and people started jockeying for better seats. I’m very happy I went to the restroom and concessions during the middle of “Pulp Fiction” because people started to get aggressive with moving forward in closer seats. It’s always interesting hearing middle age (around 45-65) stubbornly dictate where they will/won’t sit when at these type of events.

“The Fanatic” (https://www.mikethefanboy.com/the-fanatic-movie-review ) came on and I was curious if my opinion would change. I’m proud to say it did and for the better. Like I previously mentioned in my review, Travolta gives an unbelievable performance and that’s worth the price alone. However, if you go into it thinking it’s a horror and/or thriller movie primarily, “The Fanatic” is exponentially better and the best way to experience it. Don’t overthink the script and storyline. During the last half hour of the movie, the front audience members started hearing a loud commotion outside. Travolta had arrived and was interacting with fans. Eventually the theater staff got them to quiet down and snuck in John Travolta, who watched the final 30 minutes with the audience. The crowd gave a great response and I genuinely can’t wait to see the movie again (seriously).

After being introduced, John Travolta received a standing ovation. Over the years I’ve been very fortunate to hear many of my idols talk, but there is absolutely an aura around certain celebrities and Travolta is absolutely one of those people. Throughout the Q&A, Mr. Travolta emphasized his admiration for his fans and how he could relate to Moose. 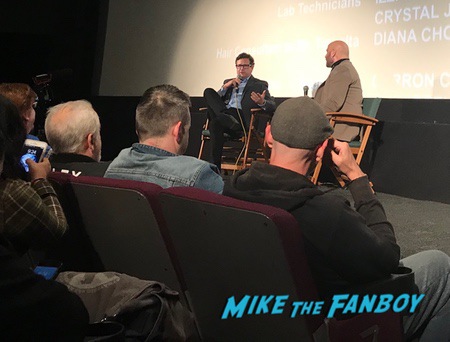 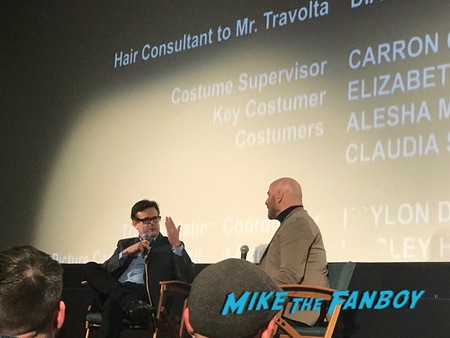 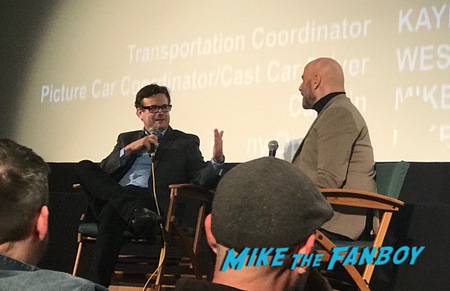 Some of the highlights included:

-Hunter Dunbar (Devon Sawa) is a good person, but a bad celebrity. Everyone has their bad days, but as a public figure you have to expect interactions. When I go out I expect to interact with fans.
-Fred Durst approached Travolta 15 years ago saying he would love to work on a project with him and wrote Moose specifically for the actor.
– Moose is on the autism spectrum and knew how to portray that character.
-Travolta usually does his research months in advance and when he is on set, “(I’m) ready to go.” He joked how on “Primary Colors” Billy Bob Thornton and him were able to immediately jump into scenes, but Kathy Bates needed prep to “get into the mindset” and use her method before acting. He prefers research instead of method acting, but what works for you might not work for someone else.
-As a child, his mom would pretend to talk to James Cagney (his idol) on the phone in order for him to do chores and/or if he was misbehaving.
-Throughout his career, he’s been very fortunate to meet most of his idols and is a fan himself. 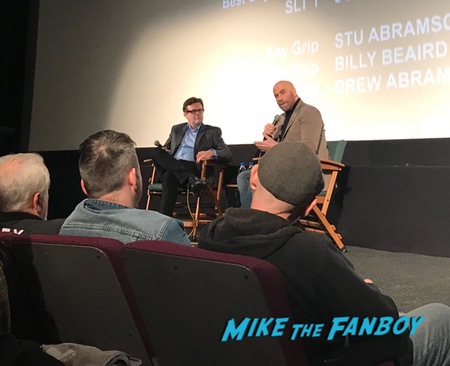 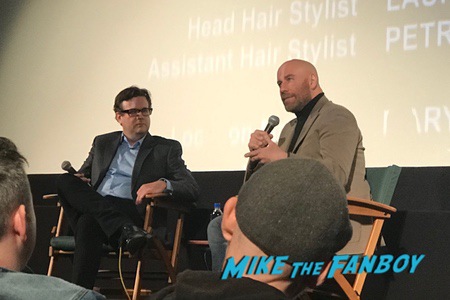 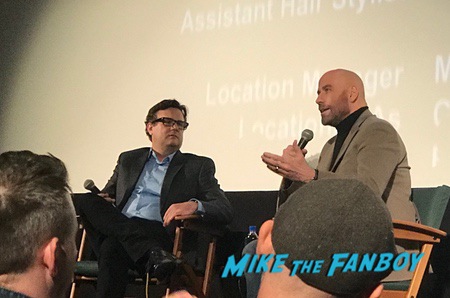 -Travolta doesn’t have a favorite role and while attempting to answer the question various fans spouted off their favorite performances from the crowd. Travolta continued talking saying he’s proud of the career he’s had because of the wide variety of roles and how so many different roles speak to people alluding to the recent responses by the crowd. It’s an awesome feeling and he loves hearing fans talk about how certain roles speak to them.
-In “Face Off,” acting as Nic Cage was easy because of his mannerisms whereas Nic initially had trouble until being suggested to watch “Phenomenon” and “Look Who’s Talking” to closely resemble Travolta. Also during shooting, the two actors would tell one another of little moments they did so the other could keep continuity and keep the illusion alive.
-Bruce Willis and Daniel Day Lewis were up for his role in “Pulp Fiction” as Vincent Vega. Quentin Tarantino had to fight for Travolta to be cast and is eternally grateful for reigniting his career.
-He met heroin users and played the character Vincent Vega as a “weekend user,” which plays a factor with how he interacts during the Mia Wallace and Vance sequences. 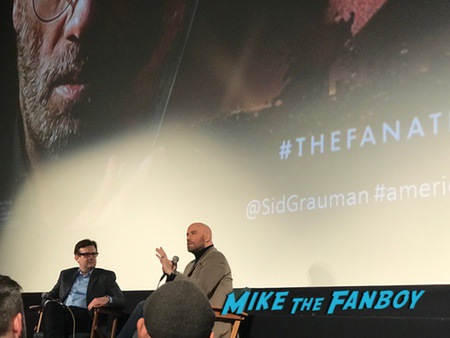 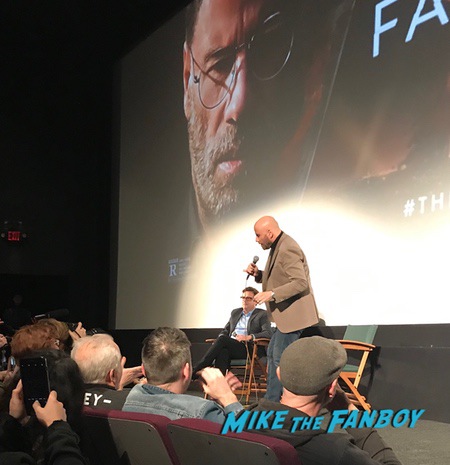 -To replicate the idea of using heroin (as suggested by a user), he was told to drink a ton of tequila and float in a pool which would be the closest similarity for the initial high and allow his imagination to do the rest
-Best fan moment was a fan changing their legal name to Travolta and her keeping it for 40+ years.
-Worst fan moment  was when Travolta inscribed an autograph that said “with love, John Travolta” and the fan responded, “Like I’m supposed to believe that b*******t”
-Fans mean the world to him and the idea that celebrities don’t appreciate fans is sad. It doesn’t take that much to make a fan happy. Travolta admits trying to answer every fan request in public and adds “signing an autograph only takes a few seconds” to make someone happy.
-Travolta was asked (twice) to do some dance moves, but only finally relented and did a nice montage which got the crowd pumped, which essentially ended the Q&A although a woman did ask the final “question” or rather comment.

John Travolta was awesome and amazing afterwards. He grabbed a stack of items and started signing them before handing back to fans. He continued signing down the line and was using a black sharpie. I had brought my “Blow Out” laserdisc (sadly its black) and instead decided to get my “Pulp Fiction” laserdisc signed. 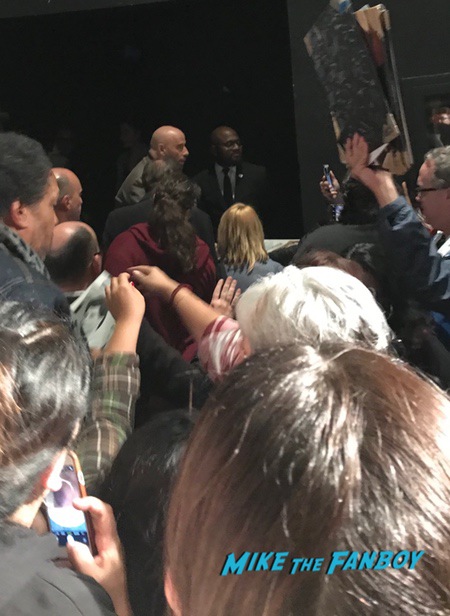 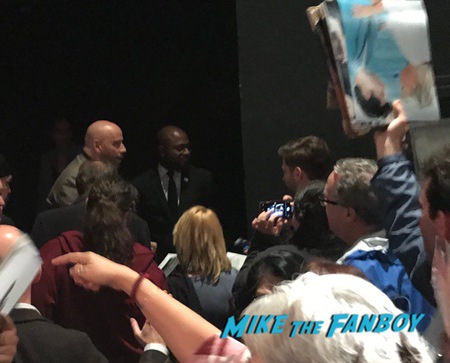 Fortunately, I was able to get my mom a “Hairspray” autograph, which John graciously signed before signing my “Pulp Fiction.” I thanked him profusely, but amongst the chaos it was hard to talk/respond. John was a signing machine and very fan friendly throughout. He was taking selfies and signing as many autographs as possible. John Travolta is an amazing person and an even cooler celebrity. As the MTF family voted (https://www.mikethefanboy.com/top-10-best-autograph-signers-2019 ) last year, John Travolta is easily one of the nicest and fan friendly celebrities around. Mr. Travolta, thank you for being so awesome and for doing a brief “Face Off” impression. That experience has literally made my day, my month and year! Now it’s time to grab a Royale with cheese and a tasty beverage. 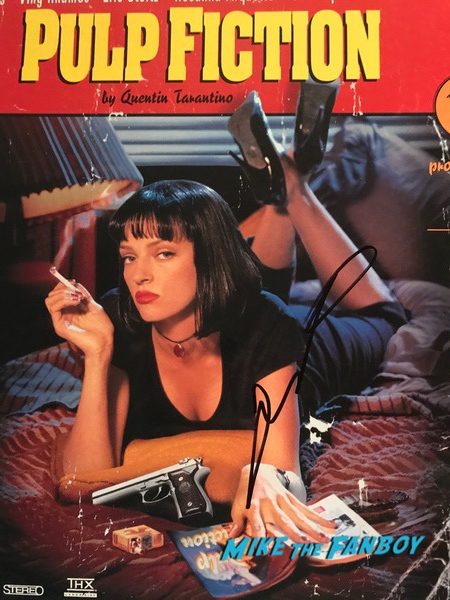 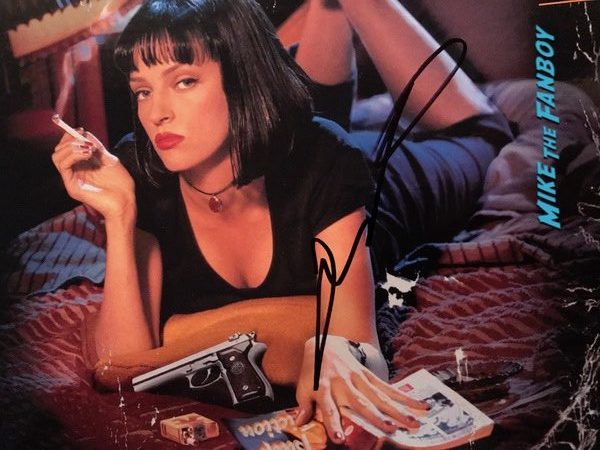