Home / Fanboying! • Paleyfest • Q and A / The Goldbergs Cast Q And A! With George Segal! Wendi McLendon-Covey! Jeff Garlin! And More!

The Goldbergs has been of the best surprises this season. It’s mix of family friendly comedy with an 80’s twist has been hilarious. I admit I didn’t start watching it until Suddenly Susan told me about this awesome event at the Paley Center. The cast was going to be there doing a q and a and showing an episode.

When Suddenly Susan and I arrived, I noticed that there were two iconic 1980’s cars out front. The DeLorean from Back to the Future and Ecto-1 from Ghostbusters. I had to get some pictures clearly. 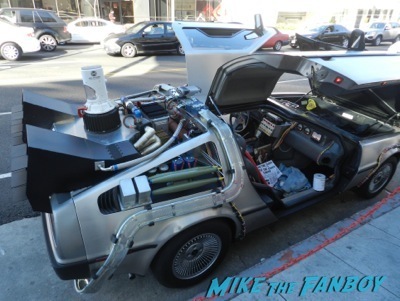 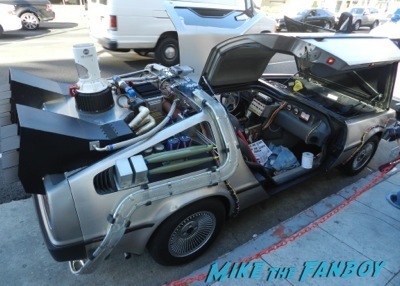 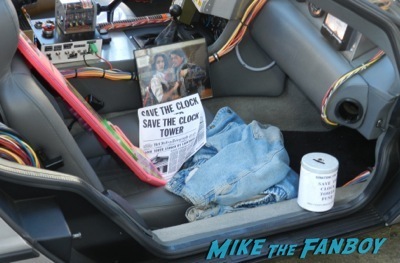 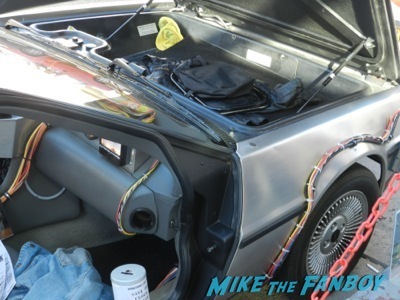 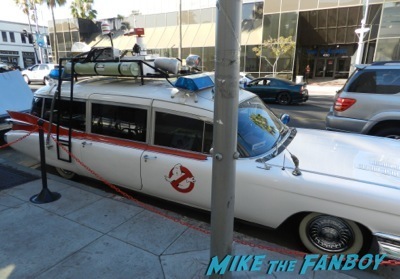 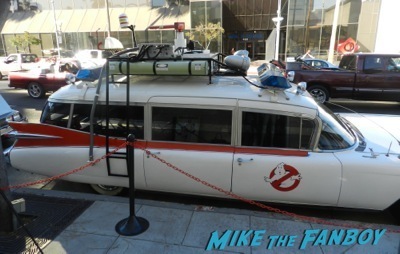 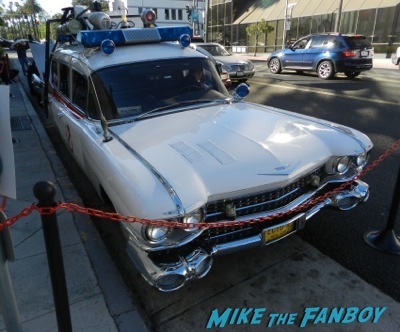 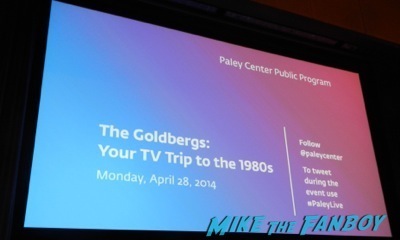 The panel was really funny. You can tell immediately when a cast likes to hang out with each other and this cast really enjoys each other’s company. The entire time they were cracking each other up and have a great time.

Some highlights of the panel:

Adam Goldberg spilled the beans that there will be another season of the series, “unofficially” 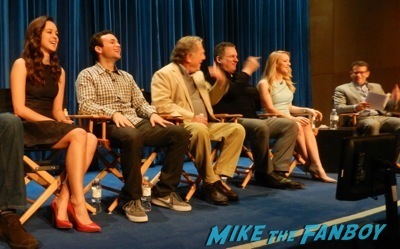 The 1980’s are the landscape of the show and are not treated as jokes.

Half of the cast and creators wanted “The Goonies” episode. They nicknamed the episode “Adam’s Folly.” 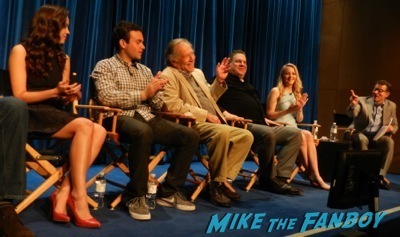 Adam said, “When I screened the first cut (of The Goonies episode) everyone looked at me like I ruined the show.” But then people loved it so much! 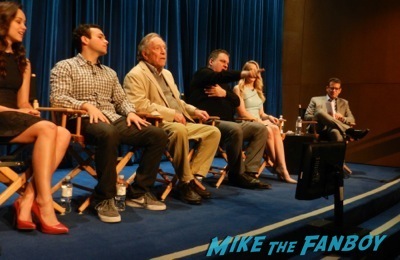 Adam Goldberg owns the Tauntaun from the upcoming Return of the Jedi episode. “I called Sony and said, I need storage for my Tauntaun” Adam said. Jeff Garlin

Wendi McLendon-Covey was the first cast in the series, and she was hotly in demand for pilot season. 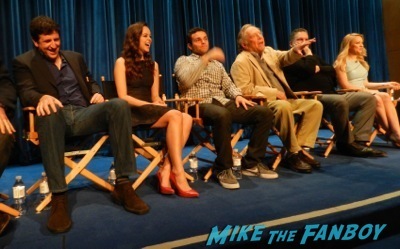 “My mom is coming, is it okay if my mom is coming.” was Wendi McLendon-Covey’s warning that the real Beverly was coming to set. “She is the kind of woman who can get a compliment out of you before telling you her name.”

“Sometimes I look in my closet and I want to cry” Wendi McLendon-Covey said, “The real Bev Goldberg sent us many of her personal gems. The stuff that is not Bev’s are some jumpsuits. Mom sent us boxes and boxes of clothes. And she wants them back.” 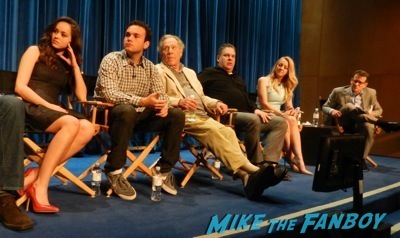 “It’s a little bizarre for me in terms of The Goldbergs, my wife is a little like Beverly so it’s a bit bizarre.” Jeff Garlin says, “When watching the show, my wife will turn to me and say, ‘it’s weird right?’” 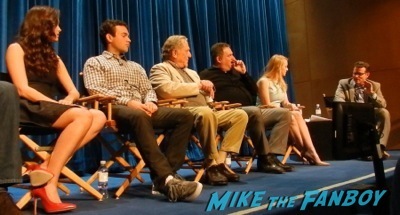 “At home, I drop me pants the minute I walk in.” Jeff Garlin said, “It’s never ending! It’s all the same!”

“Women like his (Jeff Garlin’s) legs.” George Segal said, “He gets letters.”

George Segal is hilarious. Seriously, his comedy timing is impeccable. 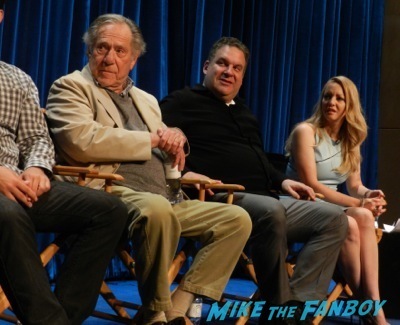 “I’m very happy in my work, I love the people I work with, they have regard for me, what more can a man ask?” George Segal said.

After the q and a the moderator said, “Oh it looks like people in the audience have some stuff to get signed, come on up, meet the cast!”

Everyone was so nice. Seriously, First off, Troy Gentile and Hayley Orrantia started signing. It wasn’t chaotic, and everyone was respectful which is nice. I got both Hayley and Troy on both of my pieces, and of course you have to move a little to get everyone.

I got George Segal on my poster, but then the security was like, “Everyone has to leave!” and they started yelling at everyone. 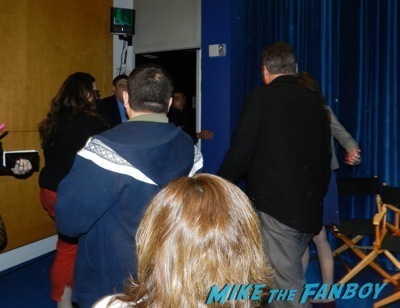 The cast seemed a little put off because they were just hanging out and were super cool. I ran over and got Wendi McLendon-Covey on both pieces. She was signing and signing, she was so happy and the security was literally trying to push her away. It was so rude.

Then Jeff Garlin was literally in the audience and was happy to sign an ignored the rent a security who tried to usher him off. I wish I could have gotten photos, but it was impossible with the jerks that were there.

Then I was walking off and Adam Goldberg was talking to people and he was super excited to be signing and signed the mini poster as well.

We headed to the lobby to leave and Troy Gentile was leaving. Some girls asked him for a photo and he was like, “Oh sure.” Then security grabbed him and tried to pull him away. Like… What the seven people in the lobby are going to attack?
It was just uncalled for and rather rude to not only the fans who paid to get in, but also the cast as well.

It’s very disappointing when go to an event like this and the rent-a-security are just nasty. I don’t understand.

Still, I had a good time in spite of that. The cast was super cool, and it was great to see the q and a. 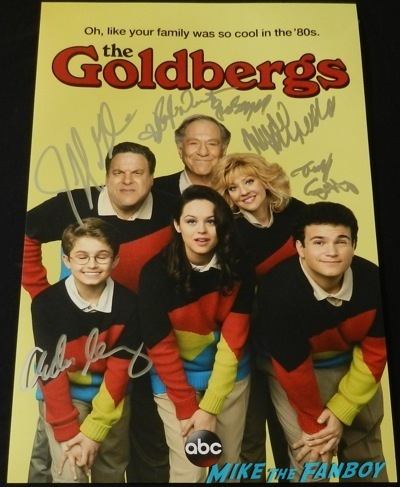 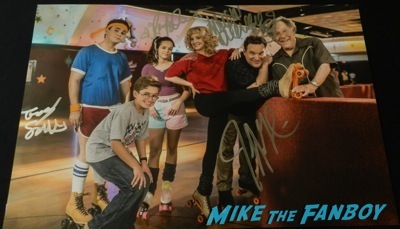