Home / Movie Reviews • Reviews / The Green Inferno Blu-ray Review! Does The Latest Eli Roth Gore-fest Live Up To His Past Films?

polarizingEli Roth has always been a polarizing filmmaker. He’s done several horror films including Cabin Fever, the torture-porn of Hostel and he also starred in Quentin Tarantino’s Inglourious Basterds but hasn’t quite achieved the cult filmmaker status he’s been aiming for. I always found that interesting, because his films, while heavy on the gore and torture have become part of the cultural lexicon. 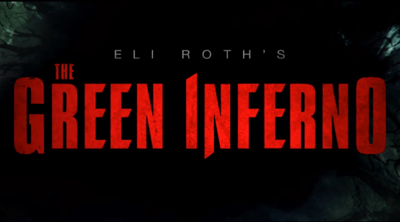 With his newest film, The Green Inferno out now on Blu-ray, Eli Roth is going into different territory while staying true to his gruesome roots. It seems like cannibal’s have gone by the wayside in terms of horror staples. As frightening as cannibals are, zombies have the added twist of post apocalyptic terror. Still, the thought of a group of people hell bent on feasting on each other does still send chills up and down your spine. 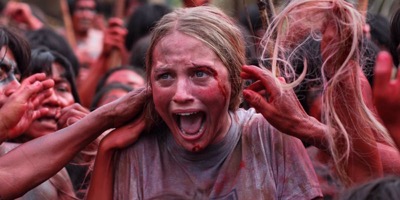 Justine (Lorenza Izzo) is a college frosh who is a human rights advocate. She gets involved in activism and Jonah (Aaron Burns) invites her to a meeting with the smoldering Alejandro (Ariel Levy) leading the charge as the group’s leader. Justine doesn’t fit in right away but eventually finds her footing and gets involved in part of a plan to protest a company’s destruction of Peruvian lands to look for natural gas deposits.

Justine has a plan. She’s going to lead a team and disguise herself and enter the camp. The team will then chain themselves to trees and trucks and broadcast the whole thing on the internet. It all works according to plan, but on the way home… Disaster strikes. The plane crashes and the survivors get taken prisoner by cannibals.

I think that happened on a very special episode of Lost… No? 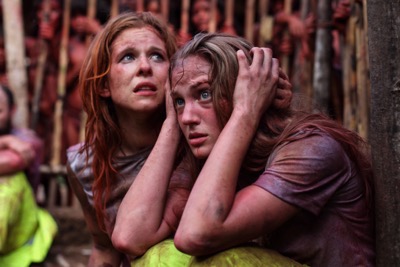 This is where the movie picks up the carnal insanity. Blood is everywhere, organs are spilled all over the jungle, I mean… It was a tad crazy. You can’t say Eli Roth doesn’t go for broke because he doesn’t flinch once. I think I’ve seen every part of the human anatomy in this movie. If you’re into the gore aspect of horror, this is the film for you. 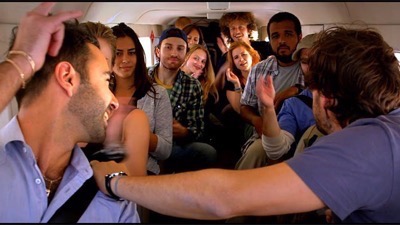 The one thing I would say is Eli Roth’s fatal flaw, is that his characters are generally unlikeable. The secret with any film, horror or comedy is that even the villains need to be likable. As a viewer, you want to care about the people you’re watching, otherwise you start to root for the cannibals and honestly they’re not charismatic enough to carry the film. It’s not like with Jason of Michael Myers where you can root for the main villain, these are a tribe of cannibals and they don’t really have a lot of personality, I mean any group of people who like to eat human flesh and look alike are hard to vilify. 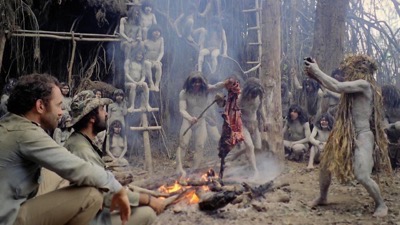 The acting, especially in the first part is a little wooden and to be honest I never really bought Justine’s dedication to the cause. Would this girl really chain herself to a truck in the Peruvian jungle? I’m not so sure. That’s not really the point in a film like The Green Inferno however. These characters are literally meat to be grilled, and to that end, they do a fine job. 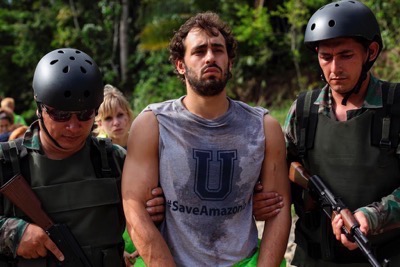 The Green Inferno lands on Blu-ray in a fine transfer. It’s interesting that Eli Roth shot the film digitally as it makes the picture really clear. It seems like a bit of film grain would have served the story better. Still, fine details are easily seen and the colors tend to pop, especially in the bloodier scenes. The jungle setting is especially crisp, almost every leaf can be made out and the details in the textiles and fabric can be seen. It’s pretty epic. 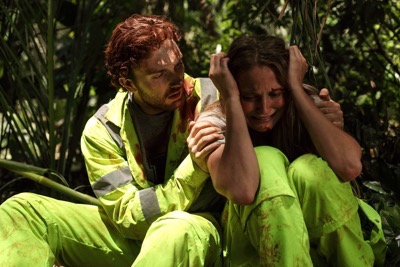 There are a few bonus features on this disc. There’s an audio commentary track with director/producer/co-writer Eli Roth, producer Nicolas Lopez, and some of the actors including Aaron Burns, Kirby Bliss Blanton, Daryl Sabara and Lorenza Izzo. It’s fine and if you’re a huge horror fan worth a listen. There is also a photo gallery with around 200 different images.

Overall, If you’re loved Eli Roth’s past films, I think you’ll love The Green Inferno.It takes the cannibal-horror feast and gives it a Hostel-makeover. There’s plenty of gore to appease fans who like seeing limbs chopped off, eaten and dismembered and while the characters are strictly cardboard, it’s still a worthy horror entry. 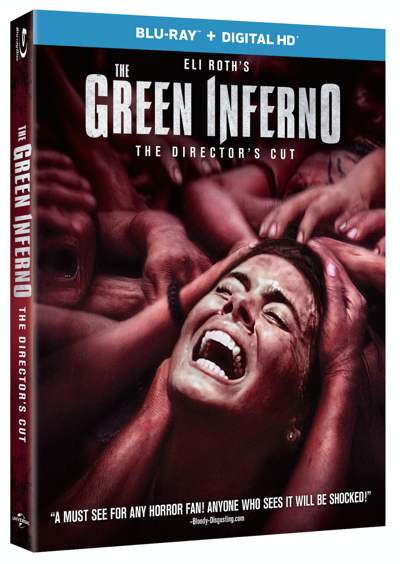 The Green Inferno is out now on Blu-ray!