Alice Wu works wonders with her sophomore effort “The Half of It.” Touching teen stories seem to be making a comeback and this is one coming-of-age story absolutely worthy of your attention.

Introvert Ellie Chu (Leah Lewis) is a shy senior student, who makes money by writing essays for her peers. Despite being well-known for her smart sensibility and maintaining an “A” average, she’s a loner and generally keeps to herself besides watching classic cinema with her father. After school one day, jock Paul Munsky (Daniel Diemer) approaches Ellie and asks if she could write a love letter for him. However, it’s not just to anyone, but Aster Flores (Alexxis Lemire), the girl Ellie secretly admires. What starts off as an ostensibly one-time gig, soon organically grows into something more and proves connections can come from the most unlikely of sources. 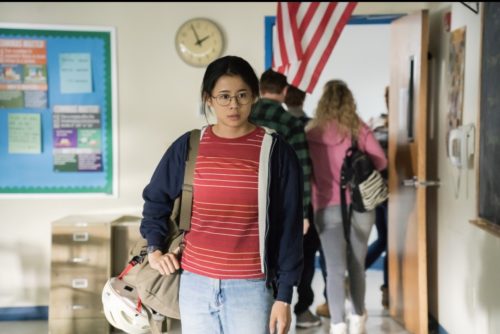 “The Half of It” is a beautiful story about love and friendship fantastically directed by Alice Wu. Capturing the charming essence of romantic comedies and young adult, it feels remarkably reminiscent of the thoughtful teenage romantic comedies from the late 1990s/early 2000s inspired by classic stories. The film is very much in the vein of “Get Over It” (inspired by “Midsummer’s Night Dream”), “She’s The Man” (inspired by “Twelfth Night”) and “10 Things I Hate About You” (inspired by “Taming of the Shrew”). However, that’s pretty understandable considering the film is another modernization of “Cyrano de Bergerac.” 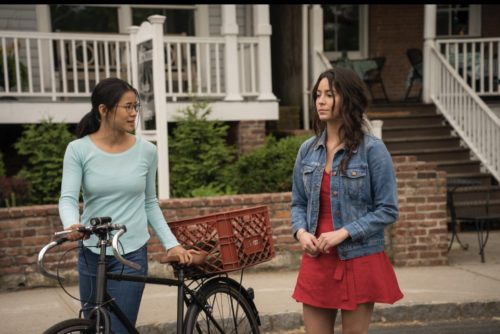 It seems like every generation gets a charming, comedic version of “Cyrano” with “Roxanne” starring Steve Martin & Daryl Hannah and “The Truth About Cats & Dogs” starring Janeane Garofalo & Uma Thurman being the two most recent. Trying to grab the attention of your crush continues to be one of the most common, complicated struggles even in the 21st Century. By updating the storyline and allowing an archaic correspondence method to be the catalyst “The Half of It” draws you in subtly. Even as the story evolves to texting, instant messaging and real life interactions, the characters’ respective journeys allows each of them to discover deeper meanings and truths about one another.

From the beginning and throughout, it’s complimentary casting everywhere, especially the three primary leads Leah Lewis, Daniel Diemer, and Alexxis Lemire creating a triumphant trio. Lewis’ loner persona permeates as the most relatable of someone going through the motions in high school and spending “most of their free time” with family. Diemer and Lemire perfectly portray the teenage struggles of social expectations and being fully immersed in extracurricular activities to do what others want and expect, not necessarily your desires. Outside of the leads, Betsy Ann Baker (“Brockmire,” “Girls” and “Freaks and Geeks”) cracks me up as eccentric English teacher Mrs. Geselschap and completely reminds me of those fun teachers you have in high school. She’s reminiscent of Allison Janney in “10 Things I Hate About You” and Vincent Schiavelli in “Fast Times At Ridgemont High,” memorable teaching figures who appear briefly, but makes a big impact. Honestly, it’s just a wonderfully cast film. 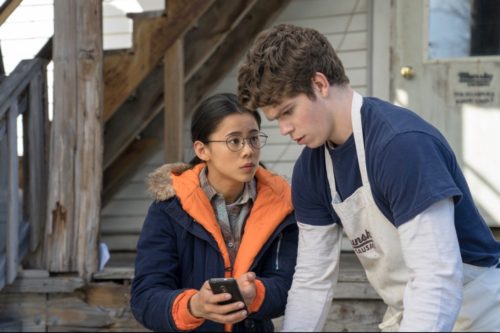 It’s a beautiful movie about innocence and discovering yourself without coming across too preachy. My only complaint is Ellie only charges $10/paper, which is a gross undercharge on her half, but in hindsight might say more about her insecurities and self-worth when reflecting on it. Regardless, it would have been way more believable at $20/pop especially considering the English teacher Mrs. Geselschap was aware “half her students” weren’t writing the papers. Overall, extremely organic without feeling forced and the chemistry creates an amazing atmosphere, especially the ending. Although it might be deemed a queer “Cyrano de Bergerac” by some, the film is so much more and presents real relatable characters in today’s teenage society struggling with identities and friendships. After all, the film recognizes that importance early on with a reference to “Casablanca,” by allowing audiences to hear the iconic line, “Louis, I think this is the beginning of a beautiful friendship.” Friends come in all shapes and sizes, but more often than not it’s when you least expect it. Such is the case with this sweet, sincere young adult rom-com.

Starting May 1, 2020, “The Half of It” will be streaming exclusively on Netflix.