Oh the Hollywood Gal! How I love her! The stories… You know I used to watch Newhart all the time on Nick at Night and in syndication when I was a kid. Who knew that one day, I would be friend’s with someone who worked on the show… and for SIX years! Crazy times!

I’ve been coaxing the Hollywood Gal to do a story about Newhart for ages… And Finally she listened… Wouldn’t it be easier if everyone just listened to me! HEH HEH HEH…

So, check out the Hollywood Gal’s backstage dish about her time on the hit television series Newhart with Bob Newhart, Mary Frann, Julia Duffy, and more!

When I look back on my measly little mini-career, I feel like I started at the top, and worked my way down. Several cult hit films, (of course we didn’t know it at the time). Several top ten shows, with top name stars. (and then it descended into, what’s the name of this, and who’s in it? Who? And then on to, “We just want your car”, just like Norma Desmond) The first of those Top Ten shows, was Newhart.

I had met Julia Duffy on her show, “Wizards and Warriors”. I was her stand-in. Blonde, petite. I got many jobs with those qualifications. The show had many stunts, so she also had a stunt double. They made her be the stand-in too. I got the boot.

Later, I had been working on “The Love Boat” frequently, as background, and when they needed a short stand-in, for kids or petite actresses, I would get a call. So, one day there was Julia Duffy, guest starring, and I was to be her stand-in again. She said,”I remember you, I’ve been trying to find you! I am on “Newhart” now,and I want you to be my stand-in”. The start of 6 years working on a top ten, heck, maybe even top 5 show, with a big name star. The Wonderful David Steinberg, and Dick Martin, of Rowan and Martin’s “Laugh-In”, directed many of them.

It was great from the get go. But not to say it was not without any drama! Bob Newhart is very mellow, and the set reflected his attitude. He really had it down. If you watch the shows, notice that he rarely moves from one spot. Everyone revolves around him. He does his schtick, and plays off all these crazy characters.The less he had to do the better. He didn’t even change out of his wardrobe after the show. He wore it home, and the wardrobe guy went and picked it up. He told the writers and producers, when they offered him a show, that he didn’t want any wise cracking kids. 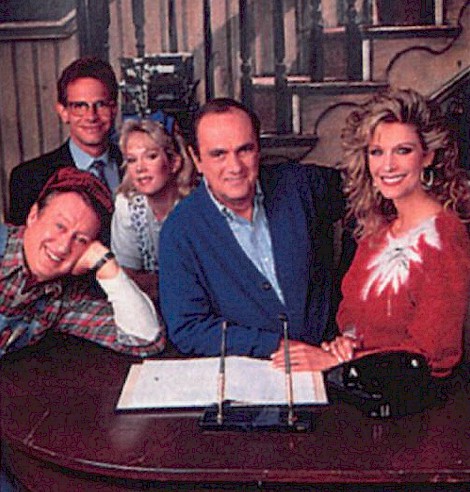 He knows what works for him, and what he wants. He was never crazy about the wife.

God Bless Mary Frann, RIP. She was a ray of sunshine on the set, always smiling and greeting everyone. But she had some annoying tics, and was constantly mugging. Bob, would edge away from her as she mugged away, so she wouldn’t be in the shot. And those sweaters! God! I think she found them herself, had wardrobe buy them, and then kept ’em. Well, after a few years, she started to want more. I think agents put actors up to this. Pulling little trips, like showing up late to the set; everyone waiting for her. Pissed Bob off. So, he would open his dressing room door, which was right next to hers, and shut it, so she would think he went to the set. Well, after many antics and posturing, and contract demands, and stories in the tabloids, she was told that the name of the show was not “Frann”, and until it was, she better cut it out. You can be replaced, you know, Chickie, Baby.

Even though I worked with Julia for 10 years, on two shows after that, we never became friends. We had a friendly, professional relationship. I really liked her, and loved her work. She was not quite the free spirit that I was. A little staid. Married to an older man. We were very different, but I appreciated her, and her loyalty to me. We worked well together.

Bob and Tom Poston were buds. They had lunch together every day. Wow, can you imagine those coversations!? Tom was a dear, and I loved watching him on tv when I was a kid. 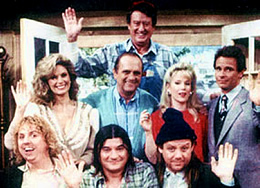 The audience would get very excited whenever Larry, Darryl and Darryl were on the show. I used to stand in for one of the Darryls as well. The blonde one. John Voldstadt, and Tony Pappenfus were excellent, trained actors, who had the perfect job. They made a decent living, working every few weeks. I hung out with them some, and they told me their agents didn’t want them to take the job, because they didn’t have any lines!! Agents can be idiots. They got famous, hello!? Harpo! Hello!? Everyone loved them! I really think there was a lost opportunity for them, but the creators of the show owned the characters, and did not allow them to do anything without approval. They all could have made a fortune in merchandising!

John, Darryl #2, met a girl on a golf promo trip to the south, married her, had a baby, and she left him, and the baby, when the show got canceled!

Larry, Bill Sanderson has had quite a nice career as a character actor since then. He is from Memphis, and used to hang out with Elvis when he was a teen. Went to the midnight movies and amusement parks. One time, I went to visit him in his dressing room, and he was listening to country music, reading the bible, drinking Jack Daniels, and chewing tobacco all at the same time.That was such a satisfying, exquisite, moment. Some actors can make it look easy. Bill made it look really, really hard. Rehearsals could be excruciating. But he always pulled it out for the show. He always wore a quarter in one ear, as Larry, and he said he saw an old black man do that, and decided to use it for the character. He used to leave his tobacco spit cups all over the set.

All the other stand-ins on the show were former dancers, who worked on all the variety shows, and Elvis and beach movies, I watched growing up, and were in all the tour companies for all the big Broadway musicals of the 50’s and 60’s! Way Cool! They call themselves gypsies.

Once in awhile, I would get a little part, or voice over, or if on a rare occasion, Julia couldn’t be there for rehearsal, I would have to rehearse for her. It can be intimidating, to rehearse with all the cast, but I was a trained actress, so I felt competent. They paid a lot more for that at the time, as well. While rehearsing with Bob, he wouldn’t even look at me in the scene. And after rehearsal, over in craft service, he came over, and right next to me, asked the AD, when Julia was coming back. And not a thanks or a “good job” to me. I thought that was very insensitive. I guess he was uncomfortable rehearsing with someone else. 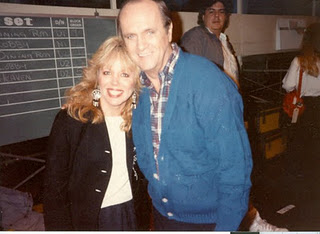 The last season, they did an episode where Peter Scolari’s character creates a tv show for Stephanie. Twins, like the Patty Duke Show. the episode is called, “Seeing Double”. They gave me a a co-starring role, with billing, as the “other” twin. It’s a pretty hilarious episode, and even though my back was to the camera, and I had no lines, there was a lot of business, and action. And Don Knotts was in the episode to boot! Between scenes, the warm-up guy, took questions from the audience, and someone asked about me. So I waved my hand out from behind the set, and it got a big laugh. It was a lot of fun to do, and after the show, Julia thanked me for being such a “rock”. After curtain call, I went back to hair and make-up, and they ripped the wig off me, and were ready to take off. I was incredulous. My hair was a mess, and their stuff was all packed up, and I said, “I’m going out after this!” They looked at me like, “Huh?” and I made them take out their fucking curling iron, so I could fix my own fucking hair. Hair Bitches. Had to ruin my high! But, hey, it is on You Tube! Enjoy!

Check out The Hollywood Gal’s site for more scoop! 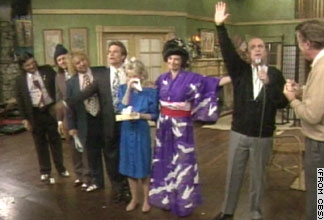