Home / On Location / The Hollywood Gal Takes A Visit To Michael Jackson’s Neverland Ranch And Gets A Tour Of The Music Superstar’s Infamous Home!

Wow, now this is an adventure I would have loved to experience! The Hollywood Gal was the guest at Neverland Ranch! Yep, the one and only! Sadly Michael Jackson was not there and they were not allowed to photograph anything, however they had full access to the grounds!

It sure seemed like an amazing adventure, one that very few of us will ever get to see!

Check out The Hollywood Gal’s adventure at Neverland Ranch after the jump!

Even though I am not a sick pre-adolescent boy, I did get a chance to visit Neverland. My friend, Greg, who worked at Sony, called me and asked if I would be interested in going to Neverland, because there was a Studio Day there. Apparently, Michael Jackson opened his home to studios, as well as other groups, and organizations. Busses would be taking studio employees, and friends and family, but Greg opted to rent a big car, and he drove me, and 2 other friends, the 2 hour or so drive, north, from Los Angeles, past Santa Barbara, to Los Olivos. This is where much of the movie, “Sideways” was later filmed.

Past the charming town, out a long 2 lane country road, of green and yellow rolling hills, cows and vineyards, we finally reached the gates of Neverland. There were attendants directing cars to park outside the gates, and before we even got out of the car, we were handed release forms,to sign, saying we would not discuss, or reveal anything to any media outlet, or anyone at anytime,about anything we saw or experienced, so I guess I am now breaking the secret pact. 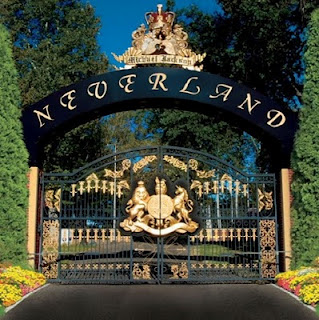 As we walked into the gates, and toward the house, there was music piped in, and upon inspecting a rock, found it was actually a speaker. They were all over the place. There were many bronze statues of children amongst the meticulously manicured grounds. Peter Pan’s lost boys, and Fagin’s raggedy pick-pockets from Oliver Twist. And there were a few girls, too.

The house was a big pseudo Tudor style. We couldn’t go inside the house, but peaking in the windows, you could see the rococo decor, and even more statues, and everything over the top, verging on gaudy, but not quite, there was an elegance to it. The house was surrounded by large oak trees, and bushes and flowers, and the statues and speakers. Nearby was a pool, and a large building, that housed a game room. Lots and lots of video games and pinball machines. Everywhere you looked, there was the logo for Neverland, a little boy, in sleepers, sitting on a crescent moon. There were people playing the games, and outside, there was a large barbecue area, almost an outdoor kitchen, and many, many staff members were busily cooking up burgers, and chicken, and there were tables of fixin’s, and they were asking you what you wanted, and you could have as much as you wanted of whatever you wanted. As we were eating, somebody brought Bubbles, the chimp out. He had cute little pants on, and everyone was gathered around him, and he was doing all his chimp antics, and I went over to him, and reached out to grab his hand and he almost pulled me down with surprising force. It was like a 3 year old with the strength of a grown man.
The whole time, you expected to see Michael come out, but he never did. He wasn’t there. It was strange to be a guest at someone’s home, being lavished with anything you could want, and the host was not even there. There was no one to thank. 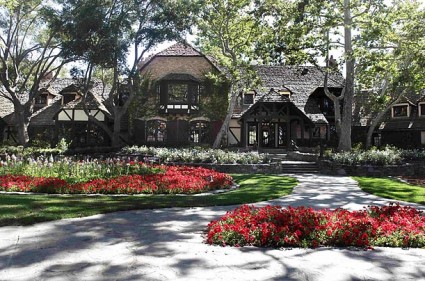 So, then it was off to the amusement park and the zoo, and the theater. We had to board the train, and the train station was exactly like the one at Disneyland. Inside the station, there was a huge painting of Michael on the wall, looking very Jesus-like, wearing all white, all back-lit, with a holy glow around him, and surrounded by little children, all skipping, and laughing. Kinda creepy. We went to see the theater. It was on another part of the property, and it was state of the art. There was a lobby with candy cases full of candy, Popcorn machine popping, and the staff offering you as much of anything you wanted. I guess there were going to show movies, but we didn’t stick around for that, but did notice the bedroom in the theater with the big glass window, so sick children could watch movies while lying in bed.

Time for rides! There was just about every type of amusement park ride you’ve ever seen. Merry-go-round, one of those big viking looking boat-type things that went back and forth, a ferris wheel, bumper cars, and more. We went on them all, but I think the thing I really liked the most, was the big huge slide that had about a dozen lanes on it, and it was one big, long slide. I did that many times. I think that was one of the first amusement rides that was invented for the public. 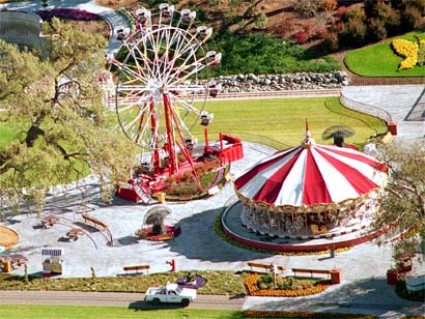 Then it was off to the zoo! Who wants to feed the alligators!? I do! I do! So, the staff gave you one of those grabber things you see advertised on late night tv, for old people to get stuff down from shelves, and there was a big tub of raw half chickens. So you’d pick one up with the grabber, and point it in the alligators direction, and he would come over, and just tear that thing out of your grabber, and chomp it right down in two bites. I loved the elephants the best, and seemed to have formed a special relationship with one. He kept coming over to me, for me to pet his trunk with his rough skin, and thick, prickly whiskers. 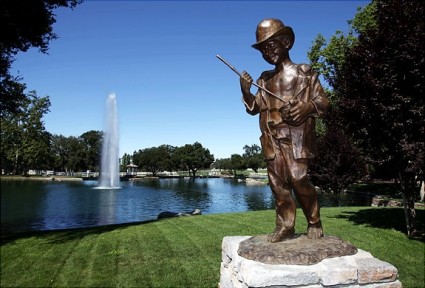 The giraffe enclosure was pretty cool, because there was a fort-like structure that you could climb up and be face to face with the giraffes, and they would come right up to you, and you could pet them, and they really smelled. Like nothing else. Giraffe smell. One came over and nudged me, and almost knocked me off the platform, with his big, strong neck. He kind of pissed me off. Damn giraffe with your big strong neck,I guess he expected some food or something, but there was no giraffe feed.

It was a long, great, wonderful, fun, exhausting day, and we all reverted back to being children, running around, laughing, playing, eating too many sweets; over-indulging in everything. I guess that was the whole point. To be able to be a child again. It was so much fun. Thank you, Michael.

Check out more from The Hollywood Gal!