Home / Conventions • Hunger Games • Props and Costumes / The Hunger Games Prop And Costume Display This Weekend At The Hollywood Show! Meet Your Favorite Celebrities And Check It Out! May The Odds Forever Be In Your Favor!

May the odds forever be in your favor!

For those of you in the Los Angeles area, The Hollywood Show and Haxbee Inc. are going to have a display of props and costumes from the hit Jennifer Lawrence film on display.

I would die to have one of the outfits Katniss wears in the movie! Drool…

Color me stoked! I loved The Hunger Games and can’t wait for the sequel!

The Hollywood Show is this weekend and features the aforementioned Grease 2 reunion! Plus, they just added Connie Stevens and Adrian Zmed! I want a co – oo – ool Rider! God I love that cult classic! 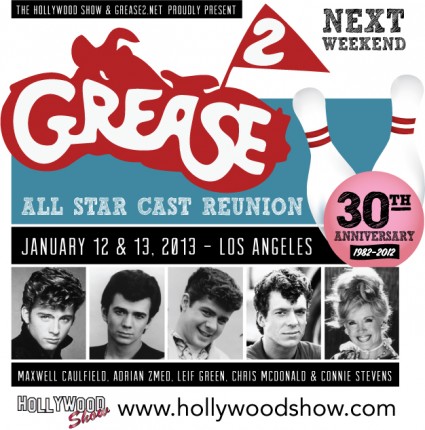 There are also cast reunions with the Hardy Boys, My Three Sons, The Beverly Hillbillies, Porky’s, Lady in Red and more!

If you guys head down there make sure and say hi. I’m be bopping around on Saturday as will the lovely Ms. Pinky Lovejoy!

Check out the Hunger Games info below!

To kick off the tour, Haxbee and its subsidiary, Blacksparrow Auctions, will be providing a special sneak preview at The Hollywood Show in Los Angeles from January 11 to 13. The Hollywood Show, a popular movie and television memorabilia convention that features over a hundred celebrities at each of its four annual shows, will be held at the Westin Los Angeles Airport Hotel.