I love it when I get special guest submissions… Oh wait… It’s Billy. I know you might not remember Billy Beer, he used to be around these parts but he moved far far away up north. There’s a different air quality there, which is why this Lego Movie recap has been delayed.

I’ll be honest, I miss that old Billy Beer. So, it’s nice when he makes a cameo now and again.

Check out his recap of the Lego Movie premiere below!

Welcome back to Billy Beer’s Bar Stool. While I was still looking for
a place to live by my new job, it allowed me to drive back to LA on
the weekends and do a little graphing! I mean what would Mike the
Fanboy be without his greatest writer. 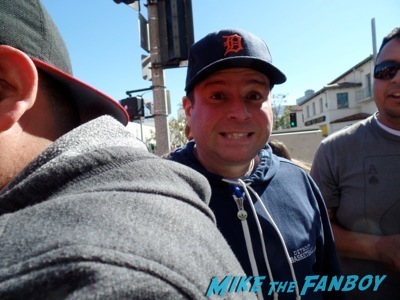 Lego my ego! See what I did
there? Enough of my clever word play,

I’m sure you want to hear about
the Lego movie premiere, so here we go.

When I get there, as warned, it’s a full street closer. Which means
we’re going to have to be across the street. This isn’t always a good
thing, cause it’s just another excuse for people not to come over.
Well, time to wait for Mike the Fanboy to get here. 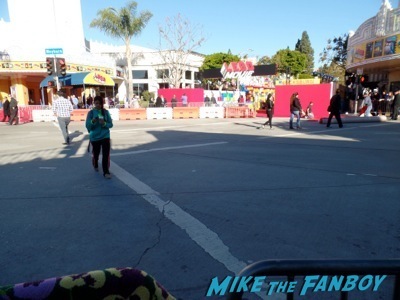 Someone’s alarm “didn’t go off” so let’s get this Premiere started.

The first celeb to arrive, was the lego guy. We call for him, but
nothing. AGH! I needed him on my poster! 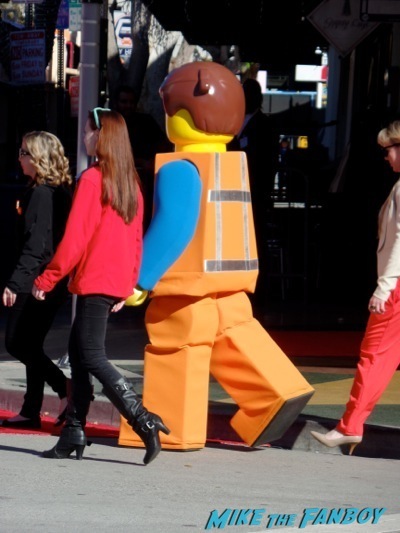 Oh well, now for the human celebs. Charlie Day is the first to arrive.
If there was a top 20 instead of top 10 signers list, I think this guy
would be on it. He’s always a super cool with the fans, and is happy
to sign. He doesn’t disappoint today either. I get my poster signed
along with a 5×7 I have of he and I. 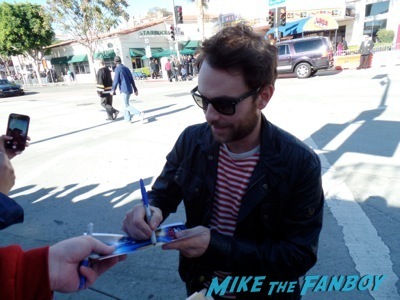 Next up is the beautiful Alison Brie. She’s been a fav of mine for a
while now. She comes right over too, and girl is looking GOOD! She
finishes up a cast piece of Boys of Summer for me (which I think she
was actually happy to see) and she too signs a 5×7 picture I had with
her. 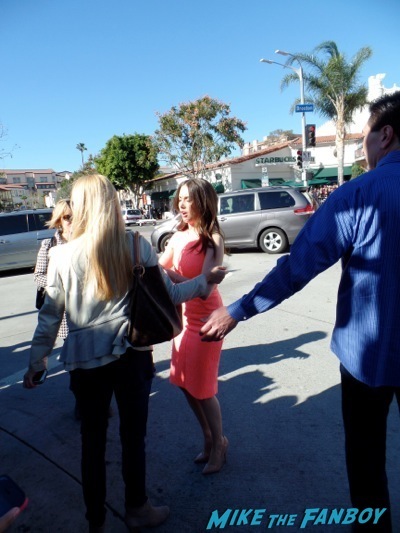 There’s Cobie!!! For those of you who don’t know, I love How I Met
Your Mother, and Robin is my girl! We had a moment at Comic Con, and I
think she hasn’t forgotten it. When she comes over, it gets crazy. She
actually stops and starts yelling at the people to chill out right in
front of me. I think she actually just wanted an excuse to stop in
front of me and check me out. She signs my poster and then went on
cause I don’t think she ever would have left if she had been there any
longer. 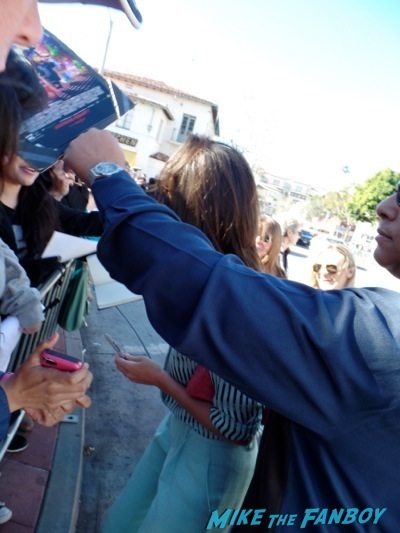 Next to arrive is Chris Pratt and Anna Farris. 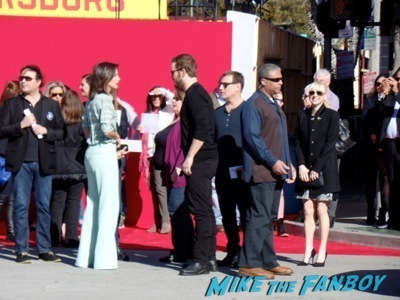 They both make their way towards us, and Chris comes right over to me. He seems to like my
Bert Maclin poster. He signs that, and then of course a 5×7 of he and
I. I’m able to get another picture with him too. 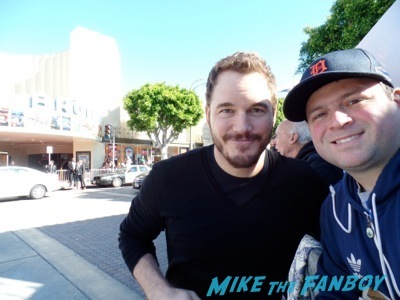 Then his wife Anna Farris makes her way over to us. She seemed to like my picture too,
probably cause it wasn’t from her playboy bunny movie. I try and take
a picture with her, but for some reason my camera wasn’t working at
the time. 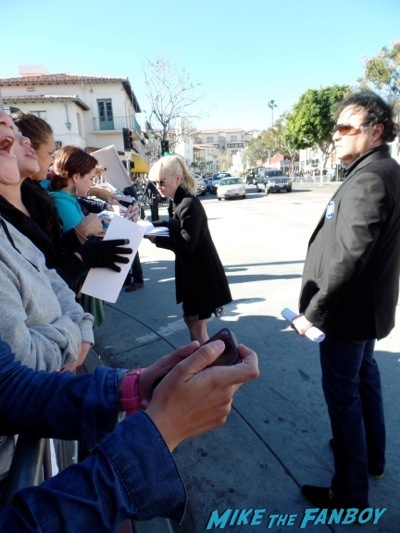 After that our section pretty much got ignored. Will Arnett and Will
Ferrell both signed at a different spots, 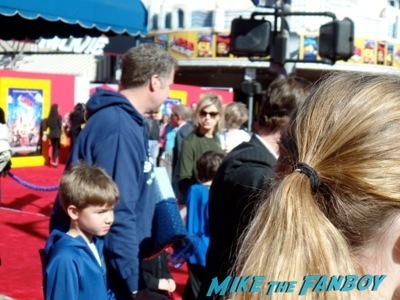 and Morgan Freeman, well you know how that story ends. 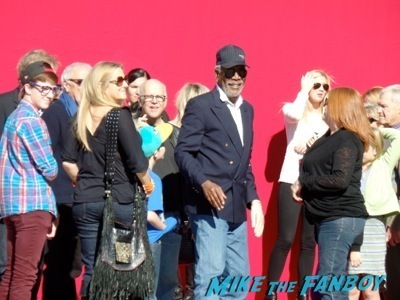 I moved around to a different spot to try and get people after the red
carpet. Doing so I was able to get a nice picture with one of my new
favorites Brie Larson. She’s been super nice during award season. 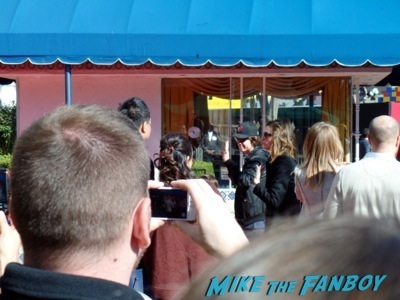 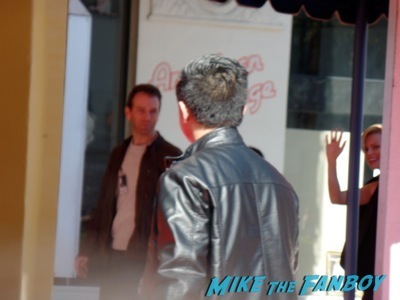 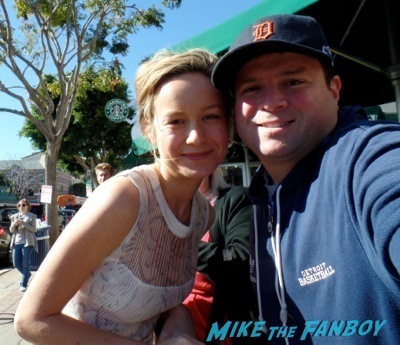 Well, that’s about it. We try for exits, but after a while, I realize
I’m in the wrong area. So off to the grab some food. Till next time
people.

P.S.  Mark Wahlberg was there, but he had his kids with him, which you
have to respect.  And Elizabeth Banks stiffed everyone again.   But I
did catch a way!  There she is!!!  Why must you be so mean when I love
your work??!!!