And now The Novel Strumpet is back with Day 2 of her foray into The Los Angeles Times Festival of books! Today the Strumpet is going after probably the biggest… at least in name recognition genre writer around Ms. Anne Rice. Even if you know nothing about book, you know Anne Rice! Hello!

I personally loved Interview With A Vampire and hated Queen of the Damned… I’m talking about the films of course. I know Ms. Rice hates pretty much all of the Hollywood interpretations of her work. What Exit To Eden wasn’t a classic?

Check out the Strumpets Journey into The Festival of Books day 2 after the jump!

Yep, I’m at it again today. I only have 3 panels, but the last one is really cool. Anne Rice! Yeah I kind of quite reading her a little while back but I still hold a special place in my heart for her novels – despite the whiny/emo vamps. This time it’s only Lisa and myself heading down. Today my first panel is right at 10 am so almost as soon as we arrive we split up.

I didn’t get the chance to really look at the tents yesterday so I hope there’s time today to take a gander. I do stop at a $5 bookstore tent, but don’t really see anything off the bat and I can’t linger like I’d want to. So off to the first panel I go. 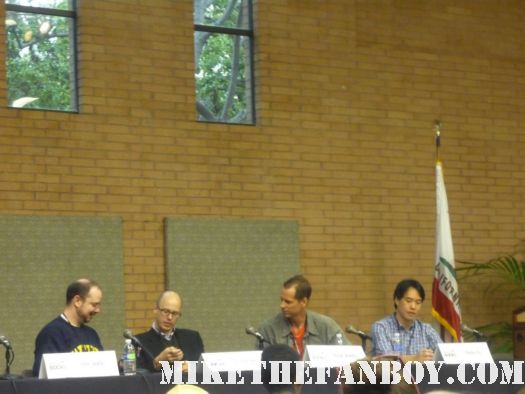 I think this was probably my favorite panel of the weekend. These guys were really willing to enter into an honest debate with each other and it was so fascinating to see. Mostly authors just have a little polite discussion about a topic, but these guys were honestly debating topics. They were joking with each other, no one was mean or insulting, but still…that’s pretty awesome to behold. Mostly it ran around fan fiction and whether or not an author is responsible for giving fans all of their thoughts or if they can hold things back from the novels and reveal them in other ways (like that whole J.K. Rowling kerfuffle with her saying Dumbledore is gay). Also how fan fiction can build on your world or smother it. Really good stuff, you should be sad that you can’t get DVD’s of the festival anymore.

11:30am Bump in the Night – Davidson Continuing Education Center 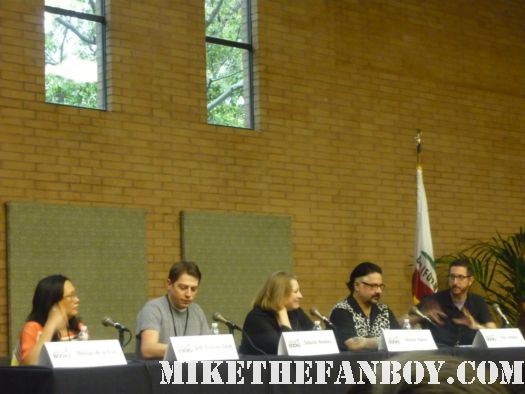 Yes, I had to leave the room and stand in line to get back in. Lame. Then I had to sit and listen to two tweeners/early twenty-somethings discuss each author by looking them up on an iPad, and then gush over how cute they thought Seth Grahame-Smith was. My brains were starting to bleed out my ears. If you couldn’t tell from the title of the panel or the books by the authors they were all about horror or paranormal creatures. Richard Kadrey’s Sandman Slim is probably the most straight horror in the bunch but they also read like pulp noir…it’s really kind of cool. They speculated on whether or not Seth’s next book would have a “hit” put on him since it’s about the flight of the Holy Family to Egypt. However, from what I can tell so far it’s mostly the wisemen that he gives his special spin to, and the Holy Family are just as pure and innocent as the Church would like ‘em. We’ll see that how goes, though. I really wanted to get him to sign my “P&P and Zombies” but didn’t have time since I got my friends’ “A Discovery of Witches” signed. However he’ll be signing at the Mysterious Galaxy booth later so I’ll catch him then.

Because I have to get to my final panel…..

First off can this room be anymore tailored to Anne Rice? 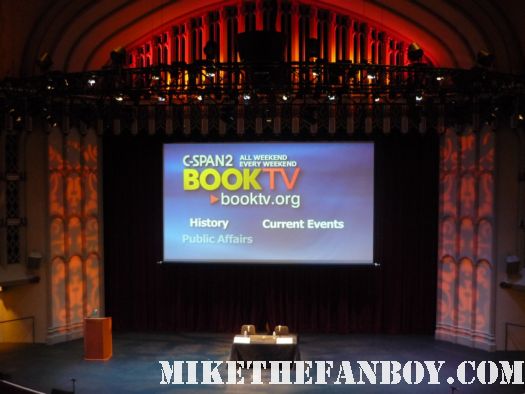 I couldn’t get all the gothic style side arches in the shot. I decided to sit first row balcony rather than fight for a spot on the floor because being how short I am the laws of the universe will dictate that the tallest person in the world would sit in front of me and I couldn’t get any pictures. I kept testing various functions on my camera and phone to see what the optimal picture setting would be…alas I need a super fancy with power zoom, but I’ve got a pretty standard digital.

Then there she is coming on stage and the whole place erupts. I’m kind of let down that there aren’t more people dressed for the occasion. I was really hoping to see all kinds of quasi goth/emo kids… you know lots of black lace, dark nails, lipstick, etc. ..but for the most part everyone looked like me. What are these shenanigans? 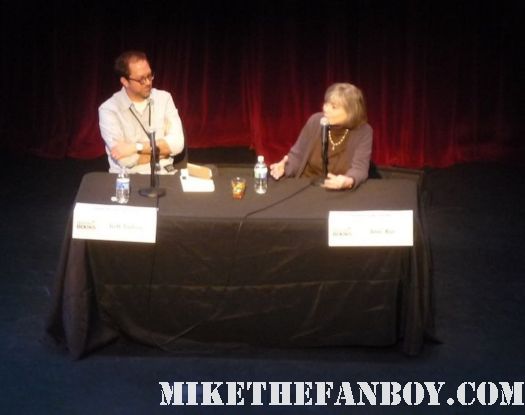 I admit that I’ve never really looked too much into Anne Rice’s life, I try not to do that with any celebrity I like because I don’t want to know the bad stuff. She is nothing like I imagined. In a very good way. In a “I now have a whole new level of respect for this woman” way. She pretty much talked about everything: her outspoken dislike of fan fiction (apparently she got caught up in some drama when someone nearly killed themselves after a blog incident she had nothing to do with, in fact she had no knowledge of the blog until after the incident), how Hollywood has completely screwed up her films (quote from her “Because they don’t care about the readers, and can never agree on what the book is really about”), her political activism on her Facebook and website, in fact the only thing that wasn’t discussed was her religious writing and then going back to paranormal. 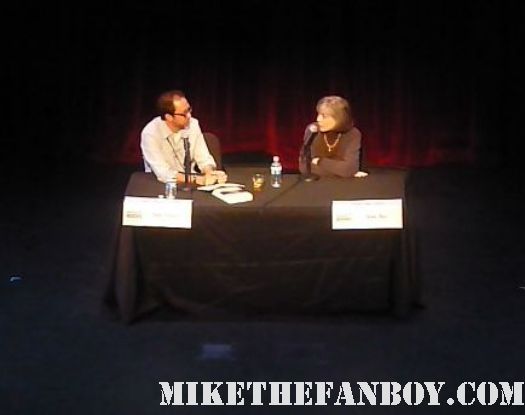 Yes, I confess, I broke down and bought the hardcopy of her newest book “The Wolf’s Gift” even though I don’t like werewolves, but hey…I wasn’t the biggest fan of vampire fiction (vampires yes, the fiction no) until I read her books so who knows?

Of course the line was fairly long, but since they put a 2 book limit and stipulated you could take pictures from your side of the table and only while she’s signing your books, I knew it’d go pretty quickly. Plus a lot of people bailed when the Volunteers said “Anne Rice will only be signing for 3 hours so I don’t know if you guys back here will be ok or not.” Obviously this volunteer and the people who bailed have never done this before. Amateurs. Just so you can understand, this is what it looked like when I first got in line, the farthest white tents are where we are heading: 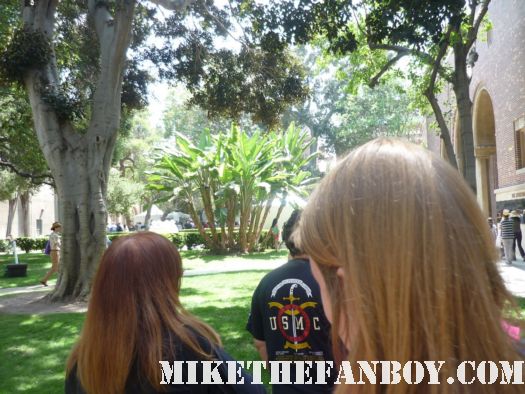 I told some people behind me it was an hour line max. I was off by about 15 minutes. I’ve been in a 2 hour+ line before…I know what that looks like.

Lisa caught up to me while I was waiting so she graciously agreed to stay and get my friends book signed so I could get my “Vampire Lestat” and the newest one signed. She also took the picture for me. I apologize to my mom and grandma now for the horrible posture…. 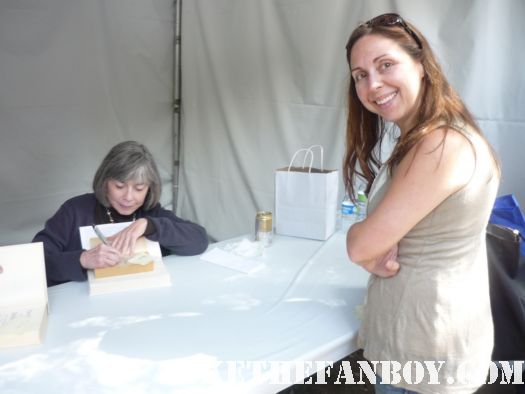 It was around 4pm by the time that was over, which means I missed the Seth Graham-Smith signing, and once again I hadn’t eaten so we were both ready to leave. I stopped by the Vroman’s and Mysterious Galaxy booths to see if there were any books that caught my eye…but there were too many people to concentrate. So we started to leave…and then saw a food truck that sells ice cream sandwiches. I never say no to ice cream sandwiches so we decided to skip the shuttles and wait for the next ones. OMW….I had no idea this is what I’d be getting: 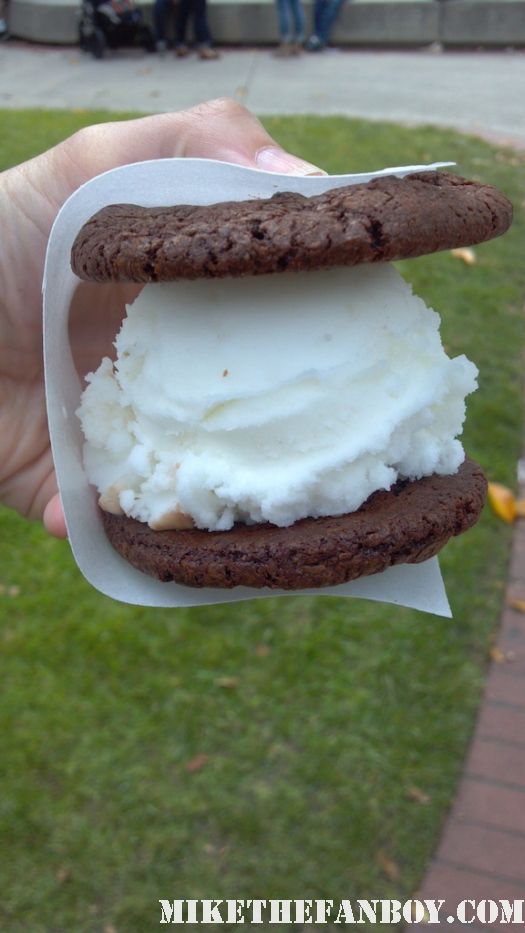 That ladies and gentlemen is a double dark chocolate chip cookie, lemon-thyme sorbet stack of heaven. Yes, it is as big as it looks and yes I ATE ALL OF IT 😀 Except for the melted parts that fell down my shirt, but that’s not something you wanna hear about….

And here is my bounty for the day: 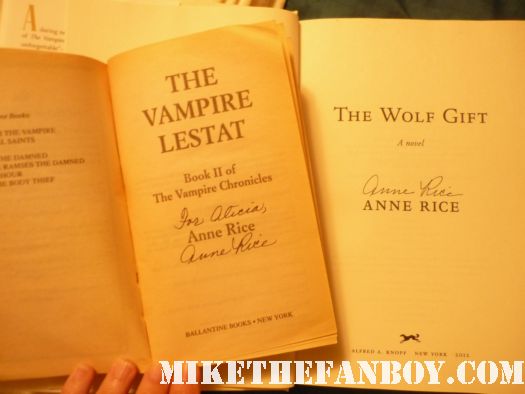