What is it about Michael Fassbender? I mean, it seems like every day a new young adventurous lass comes up to me and says, “Oh my God, do you know who my new crush is? Michael Fassbender!” And I’m like.. Magneto? But there they go swooning all over themselves… I kind of get it, I thought Michael was quite compelling as Magneto, and I heard Jane Eyre was pretty amazing… And I’ll tell you I would rather have people talking about someone who’s doing independant cinema and is acomplished in their craft then say… The Twilight kids…

So, I say, everyone… Swoon away over Michael Fassbender! Swoon until your heart can’t take it anymore! LOL… The Lovely Erica is capping her trip to La La land and really would like to meet Michael. Not that she’s swooning, but who would blame her if she did? Heck, if I was there I might swoon as well…

Check out Erica’s full report after the jump…

Every November, AFI hosts their film festival which includes a slew of premieres and special screenings for a lot of award season hopefuls. AFI tends to be very protective of the guests so it’s not always a good venue for getting that quick brush with fame. However, they are screening the film Shame which stars Michael Fassbender who was terrific as Magneto in X-Men: First Class so I have to try!

I arrive and am, once again, in the third row behind some professional autograph sellers and tourists. When it’s almost time for the red carpet to start, AFI collects the tourists and puts them in a special pen right on the red carpet. If you want to get a picture with the celebrity or an autograph, you are not allowed in the pen. It seems a little counterintuitive that the random tourists get in and the people who know who Michael is are not there. I suppose this is a way to fill up the sparse red carpet and provides AFI hope that people will post the picture of the celebrity with the official AFI backdrop for publicity’s sake. 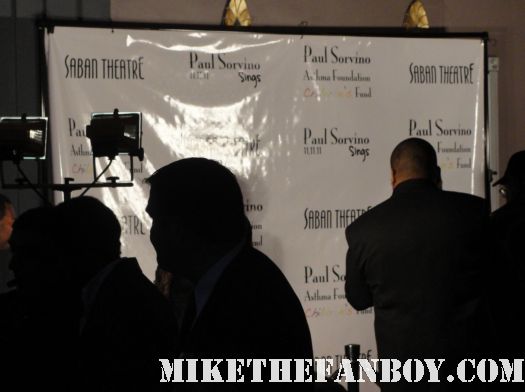 Since I would like to meet Michael, I am not in the special pen and I hope that he’s a nice guy since AFI is not generally good about letting stars sign autographs.

Case in point: They told Anne Hathaway not to sign for the crowd several times at last year’s premiere. She arrived, heard the chanting of the crowd and started to walk to us when the AFI people shook their heads and pointed her towards a little crowd on the side. A little crowd of tourists that was just big enough for a photo op. They let Anne sign there and when she finished, she pointed towards us and talked to the AFI people who shook their heads and moved her to the red carpet. Sigh! Hours of waiting and a willing star, but no luck that day. 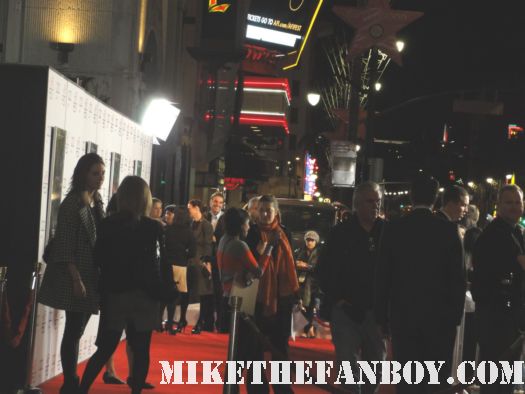 With the tourists for tonight’s screening of Shame removed to their special pen, I am now in the front row. Strangely, there is a second forming even though there is space up front. Then I realize the second row is filled with professionals who prefer the second row so that they can try to get multiples and hide behind the front row. Uh oh. I am going to get covered if Michael comes over.

The carpet for Shame begins and a few people start to arrive. Among them is the director Steve McQueen who is dressing with a tip of the hat to Scotland. 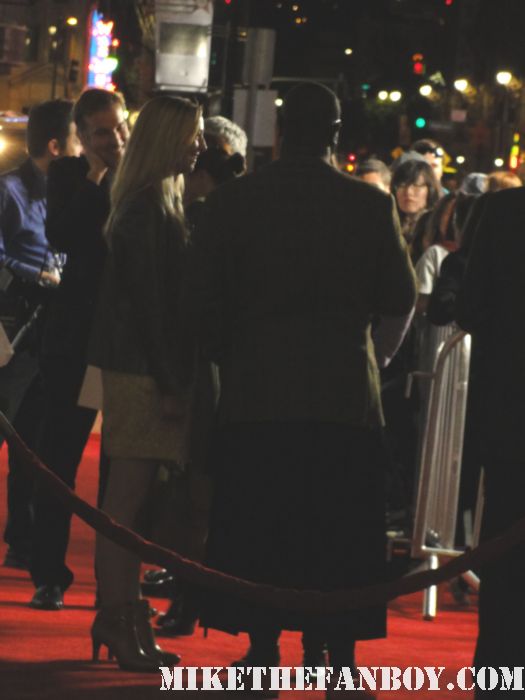 A while later, Michael Fassbender shows up and (thankfully!) heads over to us. As predicted, as soon as he approaches me, about 7 different hands loaded with a stack of photos start flying out from behind me and I’m suddenly buried. He is really cool though and is making his way through the stack in my face and in his. 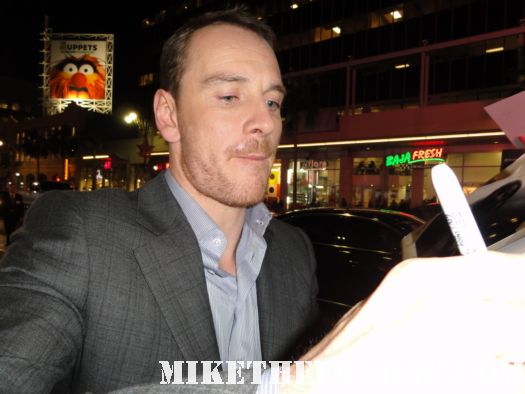 He signs my poster and then notices that the same arms are throwing more copies of the same pictures at him. He makes a request of the group by saying: “Hey guys, can we not have the same picture signed for the same people over and over again? That way everyone gets something?” Of course he says this with a charming smile and that gorgeous Irish brogue so it is very non-threatening sounding and the pros continue to assault him. 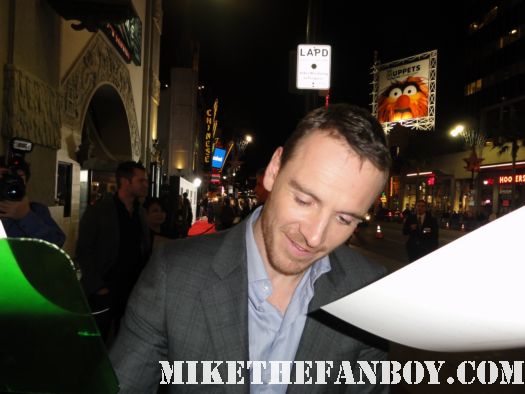 One pro says the autograph is for a friend and tells Michael that “it would mean the world to him if you would write Magneto.” Michael looks up at the guy and gives him a look that perfectly says “yeah right,” but writes it anyway. 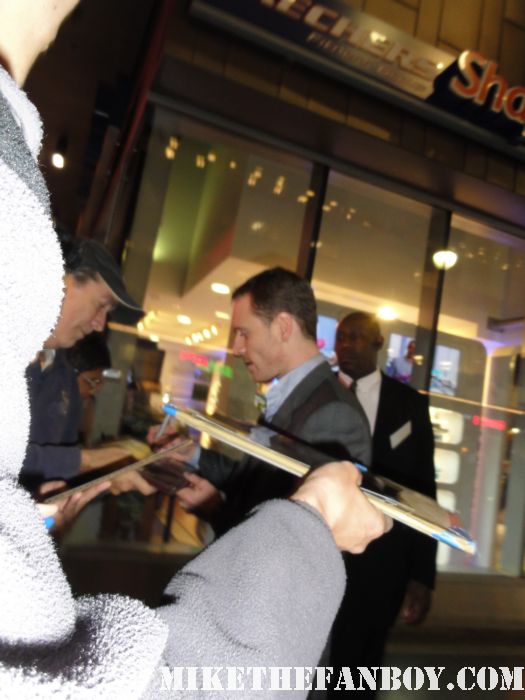 Michael makes his way down the small barricade, but AFI is trying to pull him to the carpet. I ask for a picture and he smiles and says “sure.” He comes back over and several tourist girls have joined me and he smiles and takes pictures with us all, even offering ideas for poses. He’s so cool!

Since he’s over here again, more photos get thrust into his face and the good sport that he is, he signs a few more. One person is rather insistent and throws her photos in his face and covers the photo that Michael is signing. As she’s shaking her stack of photos just a few inches from his face, she keeps calling out “Would you make it to my sister? Would you make it to my sister? Her name is XXXX! XXXX!”

Michael finally stops, has an exasperated look and says “Yes, if you step back.” She pulls back her hand and he finishes the current signature, does hers and then leaves for the carpet.

Ah the reward for being cool is to be abused!

Michael was great so look for him in Shame, Haywire and the bazillion other projects this man has lined up! 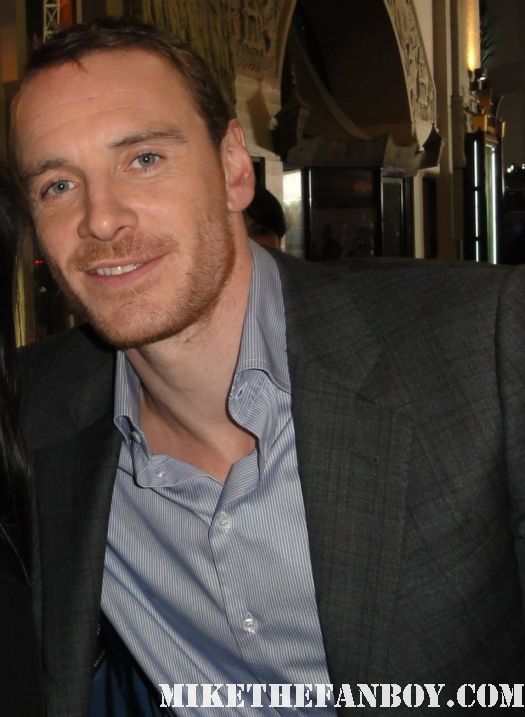