Oh that sausy Taylor Lautner! He just drives all the women crazy! LOL… Today Mr. Abduction himself, or as the Twihards call him Jacob Black is doing a talk show appearance to promoted the latest installment in the Twilight series, Breaking Dawn part 1. The novel so good it needed two parts. Anyway, I’m really trying not to be sarcasic here… Really… I am…

Erica, is heading out to try and meet Mr. Lautner and get a few things signed. She has her cherished Breaking Dawn Part 1 poster, oh I kid. But seriously, I totally understand why the Twilight craze is happening, and probably why it’s happening now. Tragic love stories, mixed with the supernatural is always popular…

I know how great Taylor Lautner is to his fans, even though I’ve never managed to meet the guy myself and if the stack of vintage or “vintage” or even “ebay vintage” magazines stacking up in my office are any indication I need to do it soon. LOL..

If I weren’t such a collector, I wouldn’t be here tonight! However, there’s another big event on the other side of town (and I can’t make that one on time) so hopefully the crowd for Taylor Lautner won’t be too crazy today.

I get in line to see a rather surprising set up for the fans since there are some changes for security. Instead of forming a single-file line, we’re bunched up on a barricade and I’m in the third row. Never a good place for someone as short as I am!

There are lots of Twi-hands here who have been waiting since early this morning and they are discussing their plans for the upcoming premiere. Some random facts for the dear readers of Mike the Fanboy:

People fly in from all over the world for the Twilight: Breaking Dawn premiere. There are people here from Holland, New Zealand and England. They flew all the way over just for a chance to get a wristband to watch the premiere arrivals. And they hope that they get a wristband with a “decent number” to watch the premiere arrivals.
They know every little detail about the private lives of the three actors. People were exchanging stories about Kristin Stewart’s dog and one guy was spotting Taylor Lautner’s family members and predicting what role they would have when Taylor arrived for his appearance.
I do not want to be anywhere near the Nokia Theatre at 6 am on Thursday when the mad dash for the wristband begins!

There are some fans who are quite pleasant and others who feel they are entitled to one-on-one time with Taylor when he arrives. I start chatting with one of the pleasant ones and she recognizes Nancy from the Rob Pattinson day. Small world!

Eventually, Taylor does arrive and waves as he heads in. He is here way early so there really is time to do it, but, alas, we must settle in to wait for him to finish!

As we wait, more and more people join us on the barricade including some undesirables who create a fourth row and, for some reason, instead on crowding everyone even though there is no one behind them.

Seriously. The guy behind me keeps knocking my head with the brim of his baseball hat every time he looks down to check his cell phone. He’s that close and there is no one behind him! And let me tell you, he checks his cell phone often!

On the other side of me, another guy is crowding me and cursing out everyone for no reason. “Grumbles” is cursing the existence of Twilight fans and wishing they move out of the way so he can get more autographs to sell. Ironically, the people he would sell it to are Twilight fans so you think he’d be a bit more tolerant!

Eventually Taylor makes his way over to us. Thank God! 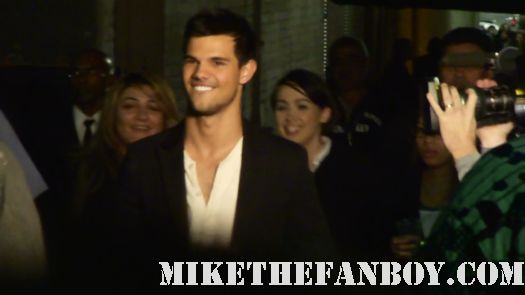 Taylor is great and is signing up and down the row. I try not to throw my poster over the people in front and am hold my little Breaking Dawn poster up high. 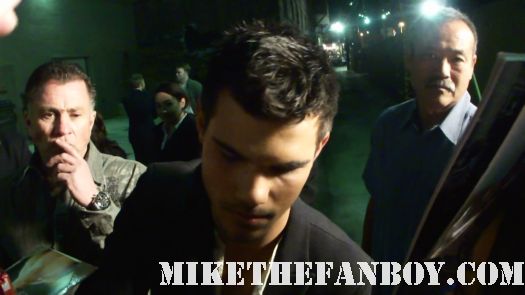 When I ask him to sign it, he immediately looks up and graphs a nice signature on it! Yeah! 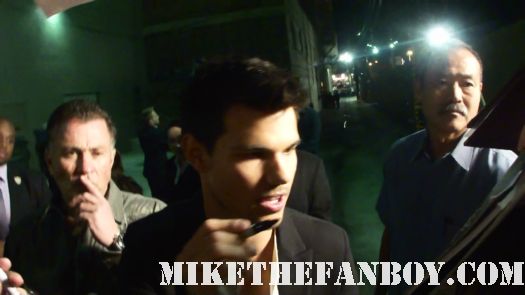 The pushy folks are crowding in so I can’t back track out of the crowd. I see Taylor stop to do some pictures and continue to sign and sign. 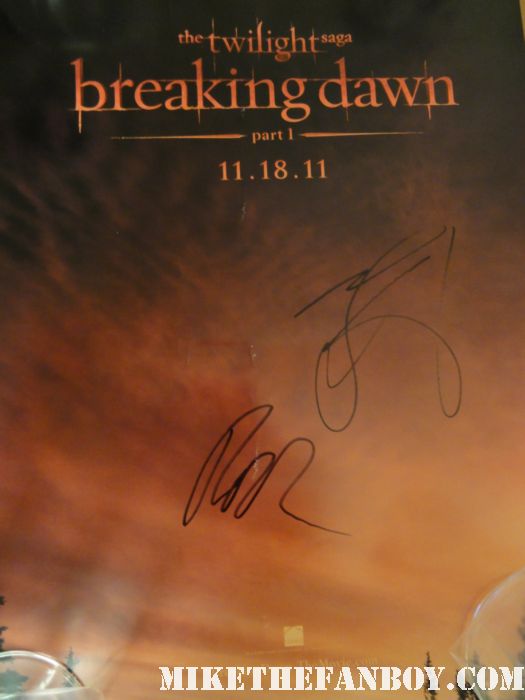 There is a ton of pushing around me with one guy literally swinging elbows around so Taylor’s signature is now a “T” and little else. 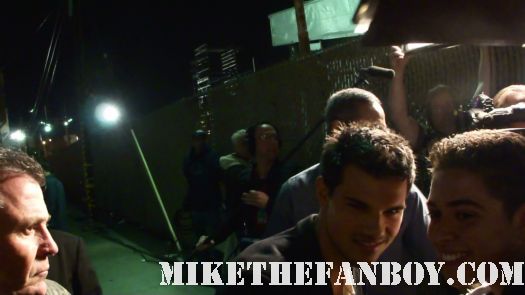 He is moving fast, but covers a lot of ground so the amount of time it took for him to walk up and criss cross the barricade is only 3.5 minutes. Yep, that’s all it takes for him to get everyone at least once. Yeah! 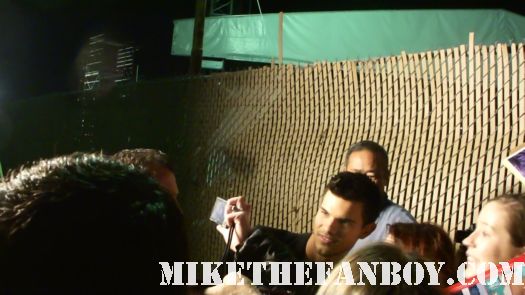 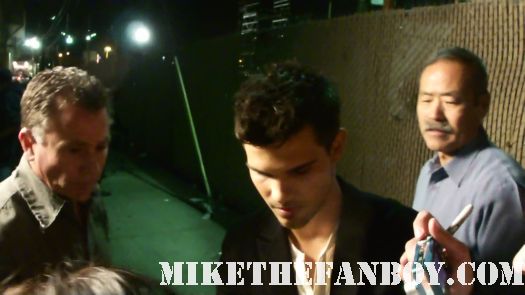 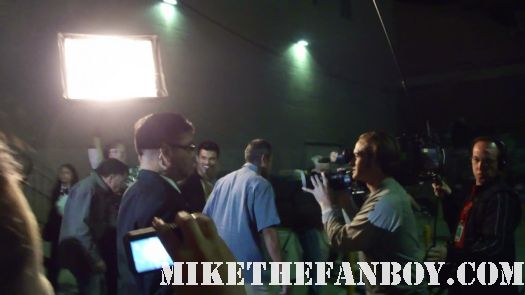 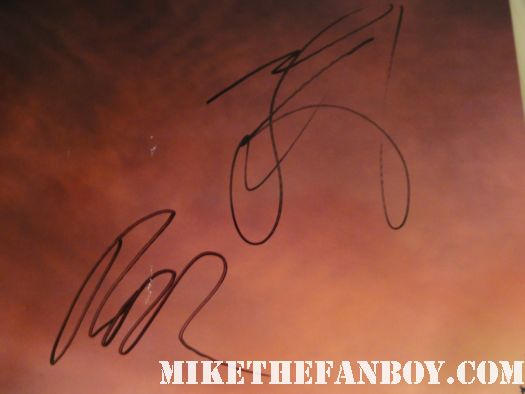